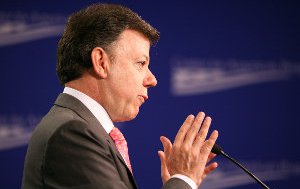 The current presidential campaign in Colombia, with Oscar Ivan Zuluaga and Juan Manuel Santos as leading candidates, has been labelled as the dirtiest in recent years. Looking beyond dirty politics, however, and there is evidence that this campaign points toward a lack of real stability within the Colombian “democracy”.

The campaign has seen, among other things illegal interceptions of the communications of members of the government and of the peace process in Havana, by the members of Zuluaga’s party, the Centro Democrático. This party represents the legacy of former president Uribe. The judicial institutions in Colombia are currently investigating the purpose of these interceptions: they seem to have been intended to undermine the current peace process with the FARC in Havana, and to support the presidential campaign of Zuluaga.

Even before the process began, Zuluaga’s party threatened to not to recognize the results of the elections. Perhaps this interesting political move was intended to erode the legitimacy of Santos, but in a country already dealing with a civil war, it is a symbol of utter irresponsibility.

Former president Uribe has alleged (although not provided any supporting evidence- in spite of the request of the general attorney’s office) the use of resources from drug lords in the campaign of president Santos in 2010 (when he was elected under the flag of continuing the policies of Uribe). The former president has been a stark critic of the current peace process, and the possibilities of negotiations with the FARC, as negotiation may be seen by some sectors of Colombian public opinion as weakness and defeatism.

Objectively speaking, the government of Santos in recent years has been a good one for Colombian democracy: the change in power and the allocation of different vital positions within Colombian institutions beyond the control of the former president Uribe’s inner circle has widened the debates and opened possibilities for dissent that were absent between 2002 and 2010. In addition, the government has reduced poverty, and is in currently implementing an ambitious victim’s law making reparations to the victims of the conflict in Colombia, giving rights and a voice to the civilians caught in the crossfire of the violence between guerrillas, right wing armies, drug lords and the government. It is more common to see protests happening in Colombia now than it was in 2006 - a symbol of a vibrant democracy.

However president Santos is quite an unpopular character, seen as weak and elitist by sectors of the Colombian population that have seen him ignore large protests by peasants, and attempt legal reforms that flirted with the authoritarian style of his predecessor. However, his commitment to peace has made ending the conflict one of his biggest policies. And maybe if the peace process unfolds, it will be a historical legacy for Colombia, ending the longest lasting civil war in the world.

These tensions between candidates has led public opinion to vote against a candidate rather than for or against a set of ideas or programs, a trend in Colombian democracy since the mid-1950’s. Colombia has been represented and portrayed - and we have been taught so in school- as a stable democracy, without a legacy of dictatorships, as opposed to most of the countries of Latin America which were led by dictatorships between 1960’s and 1990’s.

However, if one assesses the history of presidential elections in the country carefully, the panorama is more dark and the veil of the democracy of the Colombian system starts to be shaken. In the presidential campaign of the early 1990’s three candidates were killed by right wing forces, closing a decade in which the assassination of almost 3,000 members of a left wing party took place (the “Union Patriótica”- Patriotic Union). In 1994 the election was infiltrated by drug traffickers and the aftermath of the campaign saw the closest aids of the elected candidate, President Samper, recognizing that money from drug lords entered and financed the campaign. In 1998 the next presidential election saw the election of President Pastrana, largely due to the unpopularity of his contenders and the promise of a peace process with the FARC. Pastrana attempted a peace process with the FARC, but failed because of the lack of real interest in negotiation on the part of the FARC.

The new millennia saw the growth of paramilitaries and their expansion across the country, and the election of 2002 saw President Uribe taking office in a period where paramilitaries (right wing/drug-lords private armies) controlled or had influence on about 30% of the congress. Uribe was elected under an agenda of bringing order to the country and bringing the guerrillas to the negotiation table by the use of force. Uribe was faithful to his promise and, building on the military capacity built by president Pastrana, managed to weaken the guerrillas. However, he achieved this with an authoritative style. The election of 2006 saw a dramatic change in Colombian institutions as president Uribe reformed the constitution to allow his re-election. This affected the balance of power, given that the periods for established checks and balances in the Colombian political system were based on the premise that the president would not be re-elected. Therefore in 2006 when Uribe was re-elected most of the government institutions were within his reach and influence.

In 2010, the election of President Santos saw the accusation of a dirty campaign towards the candidate of the Green Party by the candidate Santos. This came in a period where Colombians came to realise the extent of the efforts and the compromises made by the institutions in the search of a military defeat of the guerrillas.

As the presence of the paramilitaries was made more evident in the public life, and the country was coming to terms with the fact that some members of the armed forces had killed civilians and presented them as guerrillas, Colombian public opinion was at a crossroads between a continuation of Uribe’s policies in order to reach “the final solution” to the conflict, and a change in direction. The result was ultimately defined by the lack of political ability of Santos’ contender.

Having said this, it is necessary to clarify that this does not justify the existence of the FARC. It should be noted that the existence of the FARC has been used as an excuse to justify the existence of the private armies, or the reduction of the freedoms under the pursuit of a military victory over the FARC. In a sense the relationship between the government and the FARC is circular: the current political elite finds justification for its mediocrity and existence in the FARC; the FARC justifies itself on the basis of problems with Colombian democracy. This is why the peace process could define the future of the country - achieving peace with the FARC will signify the end of the excuses for the lack of capacity and accountability in government and open the possibility for real leadership to be exerted by the Colombian elites to deal with the real problems of the country. Having the second biggest displaced population in the world, and the third highest index of inequality on the planet, the challenges are glaring. In light of these challenges, the current president is aiming in the right direction.

Maybe this can explain the myriad of editorials and op-eds supporting current president Santos, even from stark detractors. A recurrent subject appears to be the fact that editors and newspapers feel that freedom of speech is not compromised under Santos’ government (one columnist recounts calling him incompetent in his last 25 columns without any kind of fear or remorse), and that democracy would do better than under Zuluaga.

No matter how cliché this might sound: on the 15th of June Colombia is electing the future of its democracy.