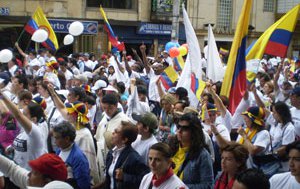 Image credit: Julián Ortega Martínez / equinoXio
As long as FARC continues to demonstrate its interest in pursuing politics beyond the Kalashnikovs, some light could start to appear at the end of the tunnel for Colombia.
The Colombian conflict has been one of the longest civil conflicts in the world: the violence that emerged in the mid-20th century has continued into the 21st, passing the fall of the Iron Curtain and witnessing the advent of remote control warfare.

The origins of the conflict are subject to different histories, interpretations and arguments. The violence of the 1950s and the later emergence of the guerrillas was preceded by waves of conflict that saw members of different political parties killed by some of the regional elites and their armed wings.

Accounts of the Colombian conflict seem not to take into account historical perspectives beyond the logic of the civil war, framing the emergence of multiple armed groups and guerrillas as a byproduct of the cold war and the Cuban revolution. However, their emergence was really a function of Colombia's political and institutional landscape, in which political space was open only to a limited group of actors, and where violence is and has been part of the dynamics of regional politics for years. Scholars like James Robinson have presented accounts of the Colombian political system like this, perhaps crude yet an honest description of the interplay between violence and politics within the country.

Following this argument, the second point of the negotiations on a peace agenda between FARC and the Colombian government – political participation – deals with a series of interesting elements regarding the reform of the political system. It is hoped that an environment can be created in which the rebels will be able to participate in normal politics as part of any final peace deal.

Despite Colombia being framed as one of the older democracies in Latin America, history provides evidence of the difficulties of  such fair political participation, and how this participation has been prevented because of the influence of armed groups. For example, Steven Dudley has highlighted the violence that members of the UP (Patriotic Union), the political wing of the FARC, were victims of in a previous failed peace attempt.

To achieve peace, everyone must have fair access to political competition, not only FARC but all Colombian citizens.
In addition, Colombia is one of the few countries in the world that has seen the murder of three presidential candidates in the midst of a national political campaign. Carlos Pizarro, representing the demobilised M19 guerrilla group, Luis Carlos Galan, of the Liberal Party, and Bernardo Jaramillo of the UP were all killed by paramilitary groups or drug cartels during the 1990 presidential elections. The targeted killing of three political candidates is shocking and extremely worrying.

However, none of this means FARC represents the majority of Colombians. In recent years the second most important political post in the country, the mayoralty of Bogota, has been taken by left wing parties. Most interestingly, the current major of Bogota is a former guerrilla of the M19 group. These changes are the byproduct of the constitution of the early nineties, that opened the political sphere to the participation of other actors. But nor does it deny the fact that politics in the regions is intermingled with violence. To achieve peace, everyone must have fair access to political competition, not only FARC but all Colombian citizens.

Dealing with and strengthening the mechanisms for democratic participation in the country is very important, especially so in the light of recent protests that point to the lack of responsiveness of Colombia's political institutions. Political opposition in the first decade of the new millennium was framed within a nationalistic discourse, where opposition was treated with suspicion for criticising government policy, and in some cases with accusations of colluding with the “terrorists”. The possibility of demobilising FARC will take this argument off the table.

This could also open up space for the increased representation of different actors, especially of disempowered and marginalised communities, including farmers, victims of violence and the displaced population (the biggest in the world according to the UNHCR). They often try to influence national agendas through existing parties, but never manage to do so because of the slow and cumbersome political system. Opening the political landscape will erode the arguments that depict Colombia as an illegitimate democracy, and will undermine those of groups claiming to have a revolutionary agenda.

The current peace negotiations seem to show mutual recognition of FARC and the Colombian government as legitimate political actors, and the need to negotiate a political agreement. This means that, unlike what some of FARC's supporters might argue, the Colombian political system is not so corrupt as not to negotiate with it, and also implies that in spite of the fact that FARC could be involved with drug trafficking and human rights violations, its political agenda is worth being considered. As long as FARC continues to demonstrate its interest in pursuing politics beyond the Kalashnikovs, some light could start to appear at the end of the tunnel for Colombia.

Currently, discussions are moving towards a series of complicated issues, such as the DDR process, the restructuring of the armed forces of Colombia, and the framework for the reintegration of former FARC combatants. This debate will be affected by (and will affect) political campaigning, as Colombia has presidential elections in 2014. This will likely create a lot of tensions and opportunities for opportunists to try to hijack and define their electoral strategies around the peace process itself, as was the case with the failed pre-candidate Francisco Santos.