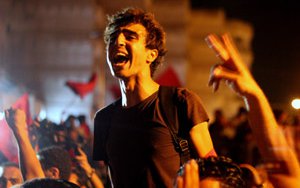 Local infrastructures for peace in Guinea-Bissau: the contribution of the regional spaces for dialogue to peacebuilding

Since 2011, [the dialogue groups] have resolved more than 200 local conflicts by using dialogue as a tool for the peaceful management of conflict related to insecurity, bad governance, religion and violence against women, among other issues.

Local infrastructures for peace in Guinea-Bissau, from Interpeace, looks at the impact of a local peacebuilding programme in Guinea-Bissau. Interpeace, in partnership with a national NGO, Voz di Paz, established 10 "Regional Spaces for Dialogue" which took an active role in resolving local disputes. The paper looks at the impact at a local level and the lessons that it can teach.

People, not pawns: Women’s participation in violent extremism across MENA

To date, the extensive research on radicalization and recruitment has devoted scant attention to understanding women’s participation. As a result, strategies and programs that intend to counter violent extremism have naturally been oriented toward male recruits.

People, not pawns, from USAID, seeks to understand the factors that drive women's participation in extremist groups in the MENA region. The paper finds that women are drawn to violent extremism for similar reasons to men, though with some important differences. The paper argues the lack of a gendered analysis of violent extremism is holding back efforts to counter it.

Emerging practices in design, monitoring, and evaluation of education for peacebuilding programming guide

Education and peacebuilding often interact and overlap unintentionally through operating in the same contexts and working with children and youth. This has led to an increased focus by practitioners, academics, and institutions on the “two faces” of education, or the ways in which both conflict and education interact with and affect one another and the lives of direct and indirect beneficiaries.

Emerging practices in design, monitoring, and evaluation of education for peacebuilding programming guide, from Search for Common Ground, aims to provide a guide for practitioners involved in the implementation of peace education programmes. The guide covers all aspects of the programme cycle, and is based on issues that have emerged from previous on the ground interventions.

Emphasised throughout the Handbook is the importance of sensitivity to the everyday experiences of local communities living through peacebuilding interventions and the core theme of the Handbook is the central role of local and national ownership in securing sustainable peace.

The ACCORD Peacebuilding Handbook seeks to give the reader a broad introduction to all aspects of peacebuilding. The handbook is built on experience of ACCORD's peacebuilding work and provides both theoretical and practical knowledge.

Terrorism continues to rise, with over 32,000 people killed in terrorist attacks in 2014, the highest number recorded. Despite being highly concentrated in five countries, terrorism is spreading, with more countries recording attacks and deaths.

The Global Terrorism Index is an annual analysis of the trends in terrorism across the world from the Institute for Economics and Peace. The index provides a comprehensive look at the levels of terrorism in most of the countries in the world, facilitating the comparison of levels of terrorism between countries and an understanding of the different factors driving terrorism. Thailand’s nonviolent activists and the struggle for democracy By Janjira Sombatpoonsiri: Anti-coup activists in Thailand are employing nonviolent tactics to express their discontent against the junta and military rule. Read more »

Interview with a Muslim peacebuilder in Central African Republic By Tamanna Kalhar: Tamanna Kalhar interviews a female Muslim peacebuilder in Central African Republic about her work and the role of women in building peace in CAR. Read more »

An interview with a leading Colombian intellectual on the peace process By Alana Poole: Alana Poole speaks with Fernán González about the ongoing peace process and hopes for an end to the conflict. Read more »

Insight on Coalition for Peace in Burundi By Katrina Kilkenny: Insight on Conflict takes a look at the work of Coalition for Peace in Africa, who work with people in Burundi to find solutions to conflict. Read more »

Who is my neighbour? The power of inter-religious peacebuilding in Nigeria By Fr. Justine John Dyikuk: The story of how the simple gesture of helping a neighbour sets an example for inter-religious peacebuilding in Nigeria.Read more » Hope for the future after testing times in Tunisia By Kevin McCann: Insight on Conflict has expanded its coverage to north Africa. Read more »

The harshness of being a Syrian refugee in Lebanon Lessons of the Balkan refugee crisis By Mirjana Kosic: Our Local Correspondent Mirjana Kosic assesses the impact of refugee flows across the fragile Balkans. Read more »

Peacebuilders in Ukraine: from zero to heroes By Olga Dolinina: Olga Dolinina reports on how civil society has adapted to support those affected by the conflict in Ukraine. Read more »