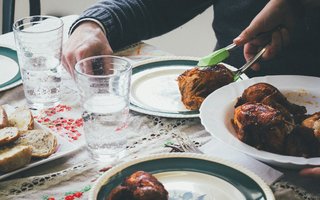 Image by Andrik Langfield via Unsplash

The geopolitics driving the conflict of Jos, Plateau state cannot be really understood except when told first-hand by those that witnessed it. 20 years later, many communities are mono-faith communities; there are Muslim lads that have never been to Christian settlements.

Shattering thirty years of friendship, the 2001 Jos Crisis saw Davou Jacob and Salis Ahmed go their separate ways. However, today they are renewing their old bonds of friendship; they sat together at the wooden picnic tables eating masa (a kind of rice cake, sometimes made into a dough that comes from ground corn, taken with chili) while a Nigerian singer and a highly respected folklorist Mamman Shata’s song played in the background.

Davou’s son, Michael, who was three-years-old in September 2001, sat across the other section of the outdoor museum venue of the Intergenerational Storytelling program of Youth Initiative Against Violence and Human Rights Abuse (YIAVHA).

Until this program, 17-year-old Ifeanyi, a Christian, said he had no Muslim friends, everyone in his school is a Christian, and he had been told that, “Muslims are terrible people.” Words like terrorists, Taliban, and Boko Haram, were normal words used in branding people of other faiths.

He is no different from 16-year Musa Salihu, who is a Muslim, who is still in palpable shock as a result of how close he is to a Christian, and no harm has come to him.

The Intergenerational Storytelling event is held across 10 communities and 10 secondary schools across Jos North Local Government Area, which are considered to be flash-points for politically and religiously motivated violent conflicts across the communities.

People spoke of collective celebration of each other’s religious festivals and solidarity with traditional stools. Conversations were also heard about how best to settle migrants into new communities through introductions to traditional leaders. Non-violent political involvement was a clear priority across the generations as people sought an end to politics of ideology.

With his plate in his hands, Michael ate; like many of the young people there, he had so many questions as he partook of the meal.

Next to him was Ibrahim, popularly called Fidel. He is 31, he has a wooden leg, a replacement for a lost leg, and he is a direct example of the human cost of conflict. Clashes between Muslim and Christian youths rocked the city of Jos in 2008, with more than 600 killed.

After the 2008 riot, he not only lost a leg but suffered displacement for over a year his family and home were burnt down. He has since lived in a neighbourhood that is religiously segregated, referred to as a ‘no-go area’. At the other end, Maimuna and Nkechi, both girls from the all-girls St. Louis Secondary School, were debating on the difference between Coca-Cola and Pepsi – ironic, considering what their city has gone through.

But friendship is being built.

“I can feel the friendship,” a smiling Pastor Philip Zam of the Redeemed Christian Church said, surrounded by huge young Muslim boys from the Jama’atu Nasril Islam (the umbrella for all Islamic organizations in Nigeria). “I believe we have closed several doors on the past, not because we have forgotten but because we have learned our lessons and we have chosen to forgive.”

Both Redeemed Christian Church of God and Jamatau Nasir Islam have very large followings in the state, with more than a million adherents.

“Everybody is so friendly,” Davou Jacob said. “It’s almost mind-boggling how much they accept us, after years of living as divided people in a divided city, I now know there are several kinds of stories in a conflict; their story, my story, and the real story, but what is most important is for us to feast on the same table to learn, understand, appreciate, respect, and tolerate each other.”

Over the past several years, there have been several interventions, projects, and efforts both by state and non-state actors but the Intergenerational Storytelling has brought together former enemies so quickly that several local peacebuilders call it breath-taking. This is because it is not only a peacebuilding effort but also doubles as a trauma-healing project.

Amongst the many highlights of the programme was seeing Christian and Muslim Leaders exchange visits in their places of worship – mosques and churches – after several meetings at the community levels and telling stories of unity, peaceful co-existence to the younger generations, and sharing a symbolic meal.

“For me, I cannot wait to see the future as this is the beginning of a profound interfaith relationship,” Imam Bello Isiaka, the deputy chief missioner of the mosque, said in an interview.

A senior clergy said, “Even when times were good, I had never visited a mosque. There is no going back on the relationship.”

In the years after the Jos Crisis, there is still great mistrust between Christians and Muslims, but programs like these are helping several communities overcome a number of thorny issues.

“What is really strange here, and I have had a hard time putting my finger on it, is that for some reason I see that we are the same, worshiping the same Allah (God), just in different manners,” said Abubakar Nakande, whose elder brother was killed by those he always saw as a former enemy, now friends.

He added, “And when you find out you share the same story it is easier now for us to invite each other for our different festivities like it was in the past. The whole angwa (community) shows up — and our Christian brothers are the guest of honor.”

Some of the older generations who were part of the Intergenerational Storytelling say they would carry on, even after YAIVHA has left. Da David, a Berom leader, pledged an undisclosed sum a month to two paraplegic Muslim brothers. In the future, they all want to build a youth centre together, where young people of different faiths can learn and live new values of respect and mutual tolerance.

“I have not only learned how to forgive, but I am teaching forgiveness,” Da David said. “I’ve learned from the younger ones to keep looking forward.”

In the communities where Intergenerational Storytelling is held, they now have so much in common, according to Pwakim Jacob. He believes they are destined to be strong allies. But when he thinks of the September 2001 Crisis, and the devastation that it brought, he feels disappointment. If the stories these older generations told of when things were good before they fell apart were true, and Christians and Muslims in Jos were such natural allies, why did they have to fight in the first place?

“I have thought about this for a long time,” Pwakim said. “I’m convinced that the crisis and conflict could have been averted had we made the effort to understand each other.”

Peacebuilders and community members describe the event, which comes almost two decades after the 7 September 2001 crisis, as acceptance of the need for each other. The community members and the young adults in the project have a different interpretation, saying it is significant because this is not being done by politicians but the work of an organisation that they have come to accept as part of their own.

Both groups believe that more can be done in building and fostering friendship, but these are great baby steps. Beyond the friendship between the two, propelled by the interaction of this great program, a lot has been proposed. This includes co-education, a boot camp of children from both faiths, and more.

In the end, they have decided to set up not just a network but are committed to replicating the Intergenerational Storytelling model in other communities across not just the state but the entire region and Nigeria at large.

Children and youth Dialogue and mediation
Disclaimer: The views expressed in this article are those of the author and do not represent the views or position of Peace Direct.