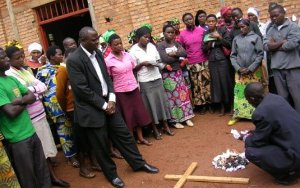 Participants at a HWEC workshop session

The Healing the Wounds of Ethnic Conflict (HWEC) approach began in Rwanda in September 1994, and aimed to deal with the consequences that the genocide had on the Rwandan people, churches and communities. The approach was developed by Dr Rhiannon Lloyd as an alternative way of solving some of the problems in post-genocide Rwanda. The approach has been applied by a number of different organizations such as ZOA International, African Evangelical Enterprise , and Christian Action for Reconciliation and Social Assistance, and is currently being implemented and disseminated by Mercy Ministries International (MMI).

Overview on the approach

HWEC is a biblical based approach which is run in the format of workshops. Its aims are: achieving the revelation of truth that sets people free; creating the opportunity for people to hear each other and express their pain in a safe environment; considering and using the cross as means of healing; enabling people to forgive or ask for forgiveness; discouraging and removing prejudices and judgments, and developing the ability to see the beauty in each other; bringing down dividing walls between ethnic groups and between different denominations; and finally, encouraging church communities to play its role in the healing of the nation.

The people who implement the HWEC approach make efforts to ensure that everyone leaves the workshops with refreshed energy and feeling loved and affirmed. In addition, participants generally leave the workshops with a determination to live out the reconciliation practically in their churches and communities.

Alongside the HWEC workshops, the approach also has a cultural side that takes shape in the form of conferences, drama, and practical displays HWEC’s beneficiaries, songs and artistic displays. A combination of interactive teaching, group sessions, ministry times and participant interaction is used. Each session builds upon previous sessions so full participation is essential.

Celebrating 20 years of the HWEC approach

On 14 November 2014, a celebration of the 20 year anniversary of the HWEC approach was organised by the MMI and took place at Nobleza Hotel, in Kigali City. Joseph Nyamutera, the director of Mercy Ministries International in the Great Lakes region, said this about the HWEC approach while giving a presentation on the impact of the HWEC:

“The baby HWEC grew like a small stream into a big river. It kept growing as it was fed, enriched and contextualized by local leaders in Rwanda and the region. This approach has been very powerful in helping people to experience resurrection. Victims were able to forgive, perpetrators found the grace to ask forgiveness, churches took up the responsibility to be the reconcilers, and families were restored. Other countries experiencing ethnic conflicts have taken HWEC into their own divided communities. So far, 14 countries are using this approach with exciting results.”

A personal story from a beneficiary of the HWEC approach

“I lost my mother during the 1994 Genocide against the Tutsis, and my father and grandmother were killed by the malicious interahamwe while I was hidden in a basket. She was killed by being beaten a big stick with nails called ‘UBUHIRI’. The blood sprayed all over until where I was hidden in the basket full of sorghum. This wounded me so much and I was overwhelmed by exceeding hatred, especially to all Hutus. I have two dairies where I use to write whoever person who could harm me. But during the [HWEC’s] Cross Workshop, by putting my sorrows, pains and anger on the Cross, I was released. I have forgiven all Hutus and including those who killed my relatives, and I have burned my diaries tonight. May the glory be to the living God.” - Jean de Dieu Ntamugabumwe

The continued benefits of the HWEC approach

Looking at the living testimonies from the HWEC beneficiaries from many of the countries mentioned above, and who attended the celebration of 14th November 2014, convincingly suggests that using the substances, resources and infrastructures existing in our communities such as church frameworks can help to heal the wounds of the past and smoothly move societies towards genuine reconciliation and sustainable peace.