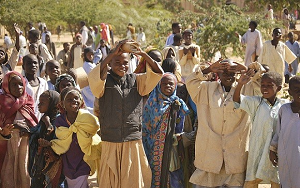 Chad is working to deal with refugees from Sudan, the Central African Republic and Nigeria. Image credit: Reclaiming The Future.

My background: peacebuilding and human rights

My name is Bouyo Séverin. Born and raised in Chad, I studied political philosophy as an undergraduate and have MAs in Human Rights and several certificates from the UN Peace Operations Training Institute. I also studied Human Rights Education at the Catholic University of Central Africa.

My background is in communications, monitoring and evaluation and project management. I've worked with a variety of organisations in Chad, including the Chadian League for Human Rights, Management Systems International, Counterpart International and Care International. I have worked at the UNDP and also spent two years teaching international humanitarian law at the High Francophone Polytechnic Institute of N’Djamena.

Over the course of the last few decades in Chad, political instability has stunted the economic and social development of Chad. It has also had a negative impact on peacebuilding. However, with the country enjoying a period of relative peace after the signing of peace accords with Sudan, hope is being revived.

Nevertheless, despite this relative stability, Chad is still dealing with cross-community conflicts affecting most of the country, particularly in its border regions. The causes of these conflicts are essentially linked to access to and control of natural resources between different groups of people.

The impact on Chad of the crises in Libya, the Central African Republic and Sudan has affected the already vulnerable situation of many communities, worsening the conflicts between them.

Indeed, in Chad’s fragile security context, reintegrating Chadian citizens returning from Libya and the Central African Republic will be a key challenge. Other marginalised groups, including young unemployed people and ex-combatants, will also need to be accounted for.

There are many other issues of concern - and hope - in Chad. These include:

I am extremely pleased to begin my work with Insight on Conflict. As the new Chad Local Correspondent, I am looking forward to conducting research on peacebuilding groups working to resolve these and other conflict issues around the country.

In addition, I will be seeking to explore a range of topics and publish articles on the impact of Boko Haram, the contribution made by civil society to conflict prevention in Chad – in particular, religious, traditional and customary authorities – and the refugee issues mentioned above. The challenges of building peace in Chad are many and varied, but so are the people working to address them.

Chad
Disclaimer: The views expressed in this article are those of the author and do not represent the views or position of Peace Direct.