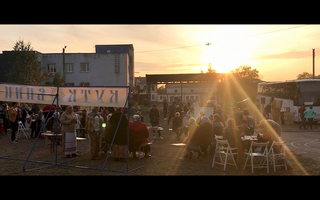 Most of the staff from Izolyatsia are Internally Displaced Persons (IDPs) who moved to Kyiv in 2014 following the Ukrainian revolution. They started to support other IDPs in Kyiv by providing humanitarian aid and basic supplies. In 2020, Izolyatsia extended their projects and opened a space in Soledar, Donetsk, to support conflict-affected communities in the east of Ukraine. Now, they are working to build peace and reconciliation through various art projects.

In 2020, Izolyatsia extended their projects and opened a space in Soledar, Donetsk, to support conflict-affected communities in the east of Ukraine

A call for dignity

The Ukrainian Revolution of end of 2013 – beginning of 2014 (also known as the Revolution of Dignity) saw peaceful protestors in Kyiv clash with riot police and armed gunmen, culminating in the ousting of elected President Viktor Yanukovych and his administration in Ukraine. These protests were more than a demand for closer relations with the European Union; they were a rejection of systematic injustice, the post-Soviet ‘way of life’, everyday corruption and nepotism. In April 2014, armed groups started seizing cities in the east of Ukraine. This escalated into an armed conflict that killed thousands of people, and left millions displaced and affected by conflict.

The ongoing armed conflict that pitted the Ukrainian government against armed groups in the self-declared Donetsk and Luhansk People’s Republics has had devastating consequences on local communities. According to the Humanitarian Response Plan, communities across Donetsk and Luhansk oblasts (administrative divisions) affected by the armed conflict, especially the elderly, women and children, were hit hard in 2020. The continuing hostilities, severe wildfires, and the impacts of COVID-19 had widespread consequences, with almost two-thirds of the population in the affected region in need of humanitarian assistance and protection. Over half a million people still live in areas directly affected by the armed conflict, continuing to experience regular exchanges of fire across the ‘contact line’.

The continuing hostilities, severe wildfires, and the impacts of COVID-19 had widespread consequences

When the conflict in the east of Ukraine started, many local NGOs initiated activities to promote understanding and dialogue, as well as to provide humanitarian support in the communities that had been shattered by the conflict. But when the conflict escalated, most had to close down their projects and escape, or operate secretly due to the high risks of being sent to prison, or of being killed.

Despite a restrictive environment, NGOs across the country are still supporting those affected by conflict by providing much-needed humanitarian assistance, mental health support, rehabilitation, and food programmes. One local organisation that remains active in Ukraine is

‘Izolyatsia: Platform of cultural initiatives’. Izolyatsia was established in 2010 in an industrial city in Donetsk, a region famous for its mining industry. The organisation’s aim is to inspire social change in Ukraine using culture as a tool, and to develop cultural and creative industries through art installations, exhibitions, libraries, and concerts. Ten years ago, an abandoned plant for insulation materials was turned into an enormous art-space, and “Izolyatsia” (meaning insulation in English) was born. Ironically, the word can also be translated as isolation or exclusion – something that this organisation is focused on overcoming.

Izolyatsia was one of the civic organisations that supported peace dialogues at the beginning of 2014 in Donetsk, and later in Kyiv. At the time, the initiative brought together people from different parts of Ukraine with different views on the conflict to help them find common ground. The team organised a series of events to start a peaceful dialogue, and created a safe space for open communication and to exchange opinions about the conflict, its root causes, possible consequences, and opportunities for peace. When I spoke to Mikhail Hlubokyi, the Director of Development at Izolyatsia, he shared his perspective:

“During the Revolution of dignity in Kyiv in 2014, just before the conflict in the east of Ukraine started, we were organizing events in Donetsk. For one of our events, we invited people from Kyiv to share their first-hand accounts of what was happening in Kyiv at that time of the Revolution. When the situation started escalating in the east of Ukraine, we organized a big literature festival, dedicated to the language of non-violence. People from all around Ukraine, occupied Crimea, Russia, and the EU were invited to Donetsk to see the situation there. People could meet each other, and exchange their opinions. The event was very popular, a lot of local people attended it. People really needed it.” During that time, Donetsk was already occupied by armed forces in the city, and the art space served as a safe space where people could avoid tension due to the conflict.

Hear more from Mikhail in our new video.

Cultural events were very limited in 2014, which is why the place was extremely popular among locals. “The mission of the platform was to provide the community with tools, knowledge and experience to empower them to create new projects, ideas and also strengthen community links in Donetsk. We also wanted to develop the economic potential of the city through creating opportunities for people living in Donetsk and the Donetska oblast”, Mikhail said.

In June 2014, the armed groups of the so-called Donetsk People’ Republic occupied the art space and turned it into a prison. “Most of the pieces of art were destroyed. It became the place where the armed groups torture people, where political prisoners are kept, where they store their weapons”, Mikhail told me.

The Izolyatsia founders were forced to leave Donetsk and recreate their art space in Kyiv to strengthen social cohesion in the conflict-affected areas and bring peace in the east of Ukraine. The new Izolyatsia in Kyiv is now located in a four-story industrial building of a shipyard plant. Lectures, conferences, workshops on art, cultural and social themes as well as concerts have continued, and the team have started renting a co-working space to fund social projects. They provided humanitarian, legal, and psychosocial assistance, and are supporting the employability and reintegration of Internally Displaced People (IDPs) in Kyiv, and those affected by conflict.

In 2020, Izolyatsia also established a cultural hub in the city of Soledar, in the Donetska oblast, to support cultural and educational projects for conflict-affected communities in the east of Ukraine. Through this work they support non-violent communication and dialogue sessions to build peace. In Soledar, Izolyatsia promote an idea of culture as a means to transform and revitalisation of the region. One of the projects is “Zazemlennya”, which explores the impact of humans on the environment and ways to overcome it.

According to Mikhail: “We started our activities in the Donetska oblast, and organized education activities for conflict-affected people in the east of Ukraine to help them to start working in the creative field”. It was important to build a dialogue inside the communities where IDPs lived in the host communities to ensure social cohesion. “People felt disconnected and divided, as they lived inside their own bubble that created a lot of fears and illusions around each other. That is why we initiated dialogue and reconciliation for these people”, Mikhail said.

Hear more from Mikhail in our new video.

Izolyatsia now has various projects focussed on promoting human rights and solving community problems. One of them is the Community Cultural Bus, a full-sized Volvo bus that has been turned into a travelling culture centre. It unites people from rural and isolated parts of Ukraine, including in the East, and brings them together for cultural and educational activities to develop local communities, and promote social cohesion. These include a street photography exhibition and workshop, a masterclass in silk printing, art workshops for children and teenagers, and an open-air cinema. People gather around art, books or a movie to encourage dialogue on complex and relevant issues within the community. Olena, the Culture Bus Coordinator shared with me how the Culture Bus interacts with communities: “We were thinking: what is more important to create a culture in the community or a community around a culture? We want a culture to be an instrument of social cohesion. We provide a physically safe space for people who come to us each time it is different community. Internally Displaced People who started NGOs, local authorities or communities invite the Culture Bus to come to their community. We plan and co-create the activities together. The communities often do masterclasses while we bring the artist”.

Some of the books that are travelling with the bus are part of “Donbass Studies”, a project created to respond to the conflict in the East by exploring community attitudes towards the geopolitical situation in Ukraine. It includes a public programme, research on the history of cities in the east of Ukraine and a library. It also has a Summer School for young researchers to promote stories of Donbass, its people, as well as the cultural potential of cities in the east of Ukraine. The project is aimed at revitalising post-Soviet spaces, building new communities, and contributing to reconciliation and social cohesion in and among communities.

Seven years on from the start of the conflict, many IDPs have already settled into their new host communities. The type of support they need now is different, and more long-term than in 2014. It is a time to plan recovery and development to accelerate economic and social development of eastern Ukraine. The local NGOs and activists should continue looking for common ground for all people with different political views to help them cooperate and build dialogue. The conflict-affected communities need informal education and cultural events to gather around and to promote dialogue, economic recovery and to redevelop the cultural landscape in conflict-affected areas. Communities should also be supported not only with financial assistance from the Government and private investors, but also with the tools and knowledge on how to develop the area and facilitate social cohesion within the communities. However, one of the most critical steps is for communities to actively look for opportunities for financial support. If locally-led initiatives and projects are supported, then more can be done to strengthen social cohesion and facilitate economic, social and cultural development in the future.

Izolytsia shows how peacebuilding can happen through cultural and creative activities. These types of projects need more support.

To find out more about Izolytsia and the various projects, watch our new video.