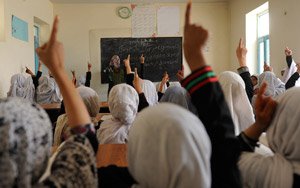 Effective early warning and peacebuilding rely on people and institutions with the capacity and willingness to engage in prevention or response to conflict at multiple levels. Local civil society organisations and groups and individuals at community level play a key role in addressing conflict and violence through their own initiatives and in contributing to the effectiveness of the early warning and peacebuilding efforts of others.

Effective local action, from Conciliation Resources and Saferworld, looks at their Capacities for Peace project, which supported local communities in early warning and response. The paper draws on the experience of the project to identify key insights for international support to local peacebuilding and early warning projects.

Their presence should not only be a burden for host countries; if given opportunities refugees can contribute to the development of local economies through their skills and knowledge. But, if they spend several years in camps without opportunities to contribute to improving their living conditions, they may resort to violence, cross-border crimes and/or join rebel or terrorist groups. This can undermine the consolidation of peace in the region.

When refugees cannot return home, from ACCORD, examines the impact of refugee flows on conflict and peace in the Great Lakes region. The paper argues that the large numbers of refugees are negatively impacting security in the region, and that many refugees are reluctant to return home even when prospects for peace improve.

Proscribing peace: The impact of terrorist listing on peacebuilding organisations

The lack of clarity in terms of what is and is not permissible in relation to contacts with listed groups creates confusion and uncertainty for peacebuilding organisations interpreting legislation. This is compounded by the multiplicity and complexity of CT regimes and broadly depends where an organisation is registered and the nationalities of its staff.

Proscribing peace, from Conciliation Resources, looks how international legislation which lists armed groups as terrorist organisations impacts the work of peacebuilders. The paper finds significant direct and indirect impact on the type of work that peacebuilders are able to do. The paper offers some recommendations for how to minimise the negative impacts of such counter-terrorism legislation on peacebuilding efforts.

A new war on terror or a new search for peace? Learning the lessons of Afghanistan, Somalia and Yemen

Support for the public and civil society is needed to break cycles of violence, redress injustice and fix corrupt, weak institutions. Engaging with society to achieve constructive change is a long-term, challenging endeavour upon which external actors desperately need to improve their record.

A new war on terror or a new search for peace, from Saferworld, looks back at 15 years of Western-led counter-terror, stabilisation, and statebuilding efforts in Afghanistan, Somalia, and Yemen. The paper argues that the lessons of these interventions show that a new approach is needed, which among other things, involves working more closely with local communities.

Peace Exchange, from USAID and DME for Peace, is an open, online community of practice where anyone with experience in or a passion for conflict sensitivity can share their experiences and resources on conflict sensitive practices, tools, and literature. The objective is to help practitioners and organizations improve integration of conflict sensitive and peacebuilding approaches into development and humanitarian assistance training and programmes.

Jordanian champion to people’s champion: how one woman is using sport to build hope in the Syrian war By Brian Canever: The Center for Sport, Peace and Society speaks to Dima Alardah, a former Jordanian badminton champion using sport to give hope to those in refugee camps. Read more »

Drugs and the law in Tunisia: counter-narcotics or counter-productive? By Kirthi Jayakumar: Kirthi Jayakumar shares her experience teaching English with Pax Populi, an initiative that pairs tutors from across the world with students in Afghanistan. Read more »

Building peace through development in Puntland: progress and chalenges