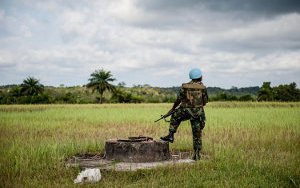 In effect, what we see from this evaluation is a microcosm of peacebuilding processes – from violent conflict to prevention, and from early recovery to development, as communities contain violence and reduce conflict – through which they are able to mobilise themselves to lead their own development.

Baraza justice, from Peace Direct, evaluates the work of local peace courts in DR Congo. The evaluation presents evidence for the wide-ranging positive impact of the courts in areas such as overcoming the culture of violence, promoting local leadership, and mobilising resources for development.

International and local actors in peacebuilding: why don’t they cooperate?

The different perceptions of legitimacy which exist amongst international and local peacebuilding actors mean that local actors are faced with a balancing act between ensuring their legitimacy on the ground and increasingly trying to also have more direct access to donor money.

International and local actors in peacebuiding, from Swisspeace, examines the lack of cooperation between local and international peacebuilders. Drawing on research in Ituri, DR Congo, it argues that the lack of cooperation is not due to differences in power and resources, as is often thought. Rather, fundamental differences in how locals and international assess and perceive the conflict create barriers to effective collaboration.

Where ADR works well, it tends to be either because it is deeply rooted in local cultural traditions and community mores and derives legitimacy and enforcement from those traditions or because of the strong personality and reputation of the local actors involved (if not a combination of both).

Dispute resolution and justice provision in Yemen's transition, from USIP, looks at alternative dispute resolution in Yemen. The report finds that since the transition period that followed the Arab Spring protests in 2011, these ways of resolving disputes and providing justice have become ever more important. However, as political instability makes the need greater, instability has also undermined the traditional, customary mechanisms, which are being replaced by those backed by armed groups.

We no longer share the land: agricultural change, land, and violence in Darfur

The shift to individual control of land and the ensuing disputes and violence have challenged traditional authority structures and significantly constrained their capacity to resolve land conflicts peacefully.

We no longer share the land, from Oxfam, looks at the local dimensions of conflict in Darfur. The paper makes the case that locally grounded issues such as land rights, land use, and agricultural change, are key factors driving the wider conflict. For a sustainable end to the conflict, these issues need to be address.

Legitimacy and peace processes: from coercion to consent

Including civilian-led grassroots structures in the proposed transition process is a strategic necessity – to give negotiations credibility and legitimacy inside Syria and to convey an accurate representation of the Syrian “street”.

Legitimacy and peace processes is the latest edition of Accord, Conciliation Resources regular publication on peace and conflict issues. The report examines the idea of legitimacy in peace processes - to what extent all stages of the process have broad public support. It includes case studies from 15 countries and a wide range of peacebuilding activities.

The latest edition of Conflict Trends, from ACCORD, includes articles on traditional and constitutional approaches to conflict prevention in Somalia, integrating local perceptions into UN peacekeeping, and Rwanda's Gacaca courts.

Peacemaking, peacekeeping, peacebuilding and peace enforcement in the 21st century

By Jean de Dieu Basabose: A look at the importance of peace education in preventing future conflicts in the context of the 1994 Rwanda genocide Read more »

By Yeshim Harris: Why a satisfactory and sustainable peace settlement for Cyprus needs to be based a collaboration between leaders, civil society and the wider public. Read more »

Kachin State (Myanmar) and its long road to peace

By Sandra Ivanov: An overview and background to the conflict in Kachin state, Myanmar, and what local organisations are doing to improve the situation. Read more »

Bringing a local dimension to peacekeeping

The challenges of community advocacy

By Shamsa Birik: Shamsa Birik, an NGO gender officer based in Somalia and Kenya, writes candidly about the challenges she has experienced implementing development projects. Read more »

By Halima Nuhu: Halima Nuhu outlines some of the organisations working at different political levels to mediate conflicts in West Africa. Read more »

Sudan Somalia Democratic Republic of the Congo Rwanda
Disclaimer: The views expressed in this article are those of the author and do not represent the views or position of Peace Direct.

Latest from Sudan · Somalia · Democratic Republic of the Congo · Rwanda →