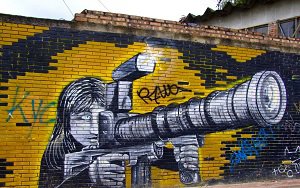 "At times, stories are tools of war: tales of nationalism can be twisted into rallying cries against an enemy across our borders—or in cases like Rwanda, the family next door. And yet, if stories can be used to call a society to arms, then stories can also be used to build cohesion and peace."

The latest edition of Build Peace explores the power of storytelling in peacebuilding. Through articles looking at issues such as countering violent extremism, advocacy and advertising, and film-making, the publication demonstrates the many ways in which telling stories can help build peace.

Missed Out: The role of local actors in the humanitarian response in the South Sudan conflict

"The international humanitarian community must redouble its efforts to develop supportive, long-term partnerships and to build local capacity and resilience before, during and after an emergency, and ensure that the humanitarian coordination system is accessible to national actors."

Missed Out, from CAFOD and Trócaire in Partnership, Christian Aid, Oxfam GB and Tearfund, studies how international and local organisations are working together to address the humanitarian needs of South Sudan. The study attempts to understand the strengths and challenges of such co-operation and offers recommendations on how the situation can be improved.

"The humanitarian sector must regain legitimacy, for itself and in the eyes of people in crisis. It must let go of the structures and behaviours that have prevented it from evolving, innovating and meeting the demands of the modern day."

Time to let go, from the Overseas Development Institute, argues for a fundamental reshaping of the international humanitarian aid system in a way that, among other changes, gives greater support and precedence to local capacity. The paper puts forward the case that the current system does not adequately address the challenges facing humanitarian aid.

Building back better or restoring inequalities? Gender and conflict sensitivity in the response to Nepal’s 2015 earthquakes

"When natural disasters strike, the global response often looks similar, yet the contexts – with their own particular gender norms, expectations and socio-economic conditions – are often very different. ... Places affected by conflicts have additional complications as conflicts damage institutions and the social fabric, and lead to psycho-social trauma. Often, humanitarian programming does not take this into account, which leads to negative outcomes."

"In many contexts, the fact that religious institutions are deeply embedded within communities makes them more legitimate mediators than traditional or political actors, an example being the Catholic Church in Colombia."

Tradition- & Faith-Oriented Insider Mediators in Conflict Transformation, from the Network for Religious and Traditional Peacemakers, looks at the role of faith-based peacebuilding in conflict contexts. The research explores the strengths and challenges of such peacebuilding work, and highlights the unique and important role it plays in securing peace.

Bujumbura calling: preventing and responding to conflict in Burundi By Kevin McCann: 12 months on from the beginning of a violent political crisis in Burundi, a group of local activists have expanded their project to monitor and respond to conflict. Read more »

The complex history of violence in South Sudan The challenges of South Sudan: how to document the war and its crimes? Retelling violence: the assassination of civil society and political actors in Colombia El Niño survivors in the Philippines: rice not bullets By Rey Ty: North Cotabato in Mindanao, southern Philippines, has been experiencing a devastating drought for six months now due to the effects of El Niño.  Read more » By Lina María Jaramillo: While the Colombian Government has announced peace talks with the ELN, the presence of other armed groups threatens to derail the peace process.  Read more »