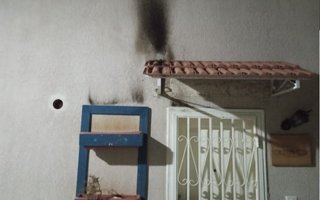 MARCH building in Lebanon after being hit by a Molotov, supplied by Lea Baroudi.

I have been thinking a lot lately about the various meanings of security, and how they relate to peacebuilding, all while witnessing the multiple layers of insecurity governing our daily lives in Lebanon.

Being insecure has become our twisted “new normal”. I hold my bag tight when out of the house, trying not to carry too much money or even ID, in case I get robbed – as has happened to my cousin and friends.

I avoid being a lone pedestrian at night in a dark Beirut, once considered the Mediterranean’s ‘City of Lights’. I schedule my work around the availability of expensive, yet unreliable, privately generated electricity and weak internet to spare myself the stress (and embarrassment) of losing connection during a Zoom call. And I stopped being apologetic about it.

This, I can live with. But not the normalisation of violence: finding excuses for aggressions and justifying them, whether against women, migrant workers or Syrian refugees. I believe there is no violence ‘for a cause’. I see this as an indicator of failed citizenship, now that no-one doubts the state has indeed failed.

I am alarmed that increased numbers of people, once self-described pacifists, are turning to violence instead of peacebuilding. Some were on the frontlines of the October 17th Revolution and had denounced state violence against unarmed demonstrators.

While their changing attitudes may be a manifestation of anger and continued insecurity, I cannot identify with them. I don’t know how I would have acted if a relative was in desperate need of medical intervention and I could not access my own money to cover it. But I don’t think I would storm my bank – I don’t possess a firearm to begin with – and hold hostages. Yet those who do so are nowadays hailed as national heroes.

This is an additional layer of violence, more dangerous than the notorious habit of firing stray bullets at almost every occasion. Those newcomers to the practice of violence are the most worrisome. They have nothing to lose and no longer believe in peace.

Targeting the most vulnerable

Refugees are entrapped in multi-layered violence practiced by both civilians and state actors.

Law enforcement is failing – inmates are escaping prisons all over the country, and more people are acquiring arms under the pretext of protecting their loved ones. Self-protection measures practiced by some municipalities could easily get out of control, turning into targeted violence against vulnerable groups, such as refugees and LGBTQ+ communities.

Although security agencies are losing personnel who are deserting their duties amid the unprecedented financial crisis, and the government has been in a caretaker status for months, they are joining hands to chase Syrian refugees and intimidate locals because of their sexual orientation.

Many refugees are at risk of forced disappearances, detention and death if deported to Syria against their will. Unfortunately, this does not mean they are safe in Lebanon either. They could die under torture in a detention facility, or be severely beaten by angry youth frustrated by Lebanon’s economic meltdown. Refugees are entrapped in multi-layered violence practiced by both civilians and state actors. They have no sense of security whatsoever. And there is nothing much Lebanese peacebuilders can do to break that vicious circle. They too are lacking security.

“Has peacebuilding failed in Lebanon?” I wondered in worry, after learning about a Molotov cocktail attack on MARCH’s headquarters in Tripoli, the biggest city in Northern Lebanon and among the poorest in the Middle East. In solidarity and support, I contacted Lea Baroudi, a certified mediator and MARCH’s Co-Founder and Director. 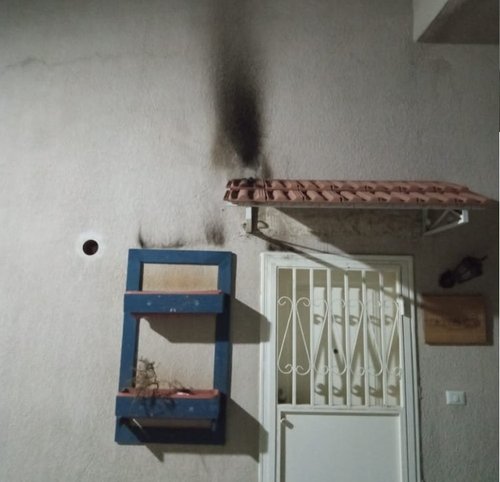 MARCH's building in Lebanon after being hit by a Molotov. Supplied by Lea Baroudi.

Why would a peacebuilding NGO – which focuses on women’s rights and conflict resolution with youth through art, dialogue and sustainable grassroots economic empowerment – be targeted? Baroudi revealed that several sectarian and political forces – agents of division – have opposed the organisation’s mission from the beginning. They tried to sabotage it several times, becoming bolder with time.

Luckily, by a divine intervention or simply karma, the Molotov hit a wall and didn’t explode. Baroudi thought it was a sign “that when you are doing things right, there is always a higher power protecting you.”

She confirmed that while the youth working with MARCH were initially shaken by the attack on their space, they eventually showed “resolve and determination, refusing to let anyone destroy the project, despite the growing mood of despair and the amplified drivers of conflict all around.”

In fact, the day after the assault, the semi-annual civil-military football tournament, which brings together former non-state fighters and Lebanese soldiers in mixed teams, took place as planned. “It was the best decision ever”, Baroudi said, as the event was very successful in addressing prejudices.

Furthermore, she thought the perpetrators of the attack “were victims of manipulation and negative rhetoric, just like the former combatants [MARCH works with] and those who cross the borders to fight in Syria.” She was referring to hundreds of men, many younger than 18, mobilised for ideological reasons or financial merits, to fight with the Assad regime. Many were returned to Lebanon in caskets, and no-one was held accountable for that. I know a Shiite Lebanese family who lost two sons in Syria. I have been to one funeral, and I saw women forbidden from crying!

Baroudi shared my fears of the normalisation of violence because of accumulated frustration, resentment, and anger, which would “strip people of their humanity”. But she still believed peacebuilding is the only antidote. And it surely is effective.

They were brought up to associate violence with manhood. Now, they fiercely resent it.

She spoke of an incident when MARCH’s youth stood as a buffer between angry men involved in a sectarian fight. They remained composed despite verbal and physical provocations; there is no turning back to the days they participated in similar disputes. They were brought up to associate violence with manhood. Now, they fiercely resent it. What an impressive journey!

Therefore, Baroudi values her mission more than ever. I have known her for years and have never seen her as determined. She reassured me that peacebuilding was not failing in Lebanon; on the contrary, “it is most needed but not practiced enough on ground, with people who are both victims and perpetrators”.

She added that peacebuilding “is so easy yet extremely difficult”; and compared it to “crossing a landmines’ field”. And since it “normally comes with challenges”, it could be draining because it consumes most of one’s empathy and energy.

This rang a bell, as I have previously witnessed Lebanese peacebuilders open up about mental burnout, as well as physical and psychological insecurities, which has led a few to quit this demanding and challenging career. I wonder how many will still hang on, and for how long. But I know Lea Baroudi will.

Disarmament, demobilisation and reintegration (DDR) Refugees and IDPs Preventing violent extremism
Disclaimer: The views expressed in this article are those of the author and do not represent the views or position of Peace Direct.