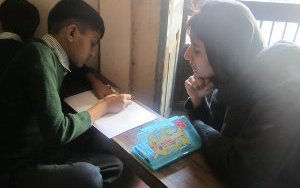 In the last week of January 2013, I visited some members of the youth organisation Laajverd, to gain an insight into their peacebuilding activities in Pakistan. Laajverd is a group of young artists who run awareness raising projects and promote peace using art and culture.

The war on terror has significantly changed the lives of the people in the area Laajverd works, but cultural activities can help heal their wounds, according to the organanisation.

Their initiatives bring people together and help them make sense of the society they live in. Terrorist attacks are frequent in this area and children talk often about war, drone attacks, blasts and killings.

Laajverd is trying to develop an alternative, creative discourse around this context and it is making children reflect on their own environment and society.

I first met a team of three passionate artists - Zahra, Fatima and Abdullah -, who were holding a four-day workshop at the Vanguard School in Lohari Gate, a private school in Old Lahore. They were working with a group of nine children aged between eight and ten years old.

During the workshop, the pupils shared their experiences about the conflict affecting their neighbourhood, reporting stories of crime, terrorism, drone attacks, collapsing buildings, and more. They learned how to communicate these stories through drawing and acting. By the end of January, over 100 children had participated in the Laajverd workshops in Lahore.

I also visited Sanjan Nagar School, where Laajverd’s artists conducted a ten-day workshop as part of the school’s summer programme. The participants were 20 students, from grade four to six. The workshop had an interesting focus on photojournalism and the children were given digital cameras to capture their surroundings.

Laajverd also runs the Bacha Bulletin project, funded by the Commonwealth Foundation under its Culture and Conflict programme. The aim of this innovative project is to bridge the communication gap between the younger and older generations, by promoting a culture of storytelling. Young people are invited to share their stories through the Bacha Bulletin, which is published in a local newspaper, the Express Tribune.

In the video below, Zahra and Fatima talk in depth about Laajverd and highlight one of the successful stories of their organisation.

The first project Laajverd launched with children involved creating a series of comics. Children were shown photos of their local area and they were invited to imagine stories, characters and scenarios. Laajverd artists then drew the comic strips and posted copies in the area where the children lived.

Laajverd also organises Chai tea sessions with children, inviting them to gather and share stories. Storytelling is an important aspect of South Asian culture but it is usually the elders who tell children stories from their past. For this reason the young participants were really keen to share their stories too and they were curious about the project.

Laajvers also worked in a school in Saidpur Village, a tourist area in Islamadad. Here they addressed some local issues, such as the impact of tourism on the traditional culture. During the workshops, run over ten Sundays, children turned into tourist guides. In this way, the pupils learned about the history and culture of their village, while tourists had the opportunity to listen to local stories.

A major challenge was designing workshops where children were asked to use their imagination through theatre. In some schools the Laajverd team had to do only two exercises, while in others, where children were used to a more traditional and authoritarian way of teaching, the team did nine theatre exercises to achieve the same outcome.

Another challenge was the time allowed for the project, as in most of the schools Laajverd could only run only two-hour workshops. The team felt that the time was not enough to fully engage with the children, to build a relationship with them, and teach them drawing techniques.

Finally, another improvement could be the inclusion of the teachers in the project and the organisation of some training for them too. In one of the six schools, the teachers were interested in replicating the workshop and implementing the Laajverd model. Although the team is not sure about the future of this project, they are considering spending some time with the teachers in each school.

In conclusion, this case study of Laajverd highlights the importance of using culture and art as a tool to build sustainable peace. Projects like these should be encouraged and promoted.