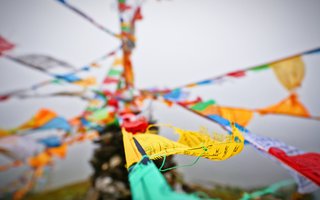 *On February 8th, 2021, the Chief Election Commissioner Wangdu Tsering announced the results of the preliminary round of parliamentary elections. According to him, a record 77% of voters turned out, with Tibetans from 26 countries going to the polls at 57 local Election Commissions around the world.

Tibetan refugees, including monks, elders, women and young people from around the world flocked to voting booths to exercise their right to vote. In the Himalayan town of Mcleodganj, nestled in the lap of the Dhauladhar ranges in North India, a steady flow of eager voters turned out, in spite of rain and icy cold winds.

The voting booth had its own significance; located next to the Tsuglagkhang Complex - the official home of the 14th Dalai Lama, Tenzin Gyatso.

Tibetan refugees, including monks, elders, women and young people from around the world flocked to voting booths to exercise their right to vote

A tall, bespectacled man with a cream coloured ‘Free Tibet’ tote bag hung on his shoulders, pushed a folded slip in the ballot. He turned, showed his inked thumb and introduced himself, “I am Sonam Tsering, General Secretary of the Tibetan Youth Congress (TYC), the largest NGO in exile”. Proud to be volunteering during the election, he remarks that for every Tibetan this is a moment of pride. Pulling up a red plastic chair to sit in a corner under a canopy of fluttering prayer flags lit up by a feeble sun, Sonam said, “It is a blessing in disguise for each Tibetan. Even in exile we are practicing democracy and reforms within the democratic institutions like any other democracy in the world. It’s a gift from His Holiness to the People of Tibet to practice and make it good”.

We continued our conversation later in Sonam’s office. Pointing to a board with photos of executive members, Sonam tells me about the organisation’s history; its 89 regional chapters and over 35,000 members, some of whom have gone on to become parliamentarians, including the current President Lobsang Sangay. “We have contributed to laying the foundation for democracy and for its idea to grow”.

In 2003 when he was just 10 years old, Sonam walked through the mountain passes, crossing icebergs, glaciers and ravines with his cousin and some men from Tibet to India via Nepal. “For us democracy is a portal for entering the world of expressions. We nurture this ‘gift’ on behalf of the Tibetans inside Tibet as ‘their voice’ as well as a ‘political expression’ of our struggle against oppression by China for a free Tibet”, says Sonam solemnly. Clearly for any Tibetan to vote, volunteer, campaign and contest elections in exile is an ‘act of resistance’ as well as a stand on pursuing their political goals through non-violent action, an ideology which is now being passed on to the next generation through a democratic process. Sonam describes himself as a son of the snow land. “I will go back to my free land one day”, he declares.

Clearly for any Tibetan to vote, volunteer, campaign and contest elections in exile is an ‘act of resistance’ as well as a stand on pursuing their political goals through non-violent action 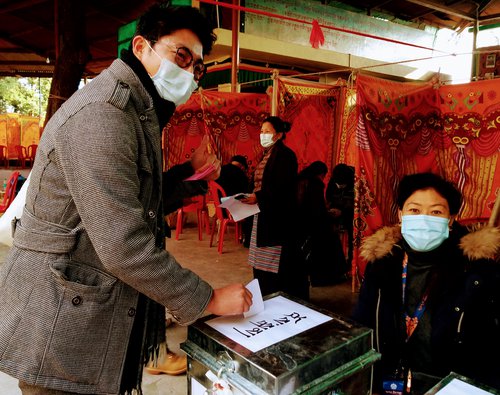 In my conversations with activists over the course of the election period, examples of Tibetan inter-generational learning and leadership were not in short supply. “I know about Tibet only through the lens of my father and grandmother. Their stories of fear, oppression and escape from Tibet is how I understand my relationship with Tibet. I am the third generation of Tibetans living in exile”, shares 29-year-old Rinzin Choehan, Director of the India Chapter of Students for Free Tibet, a grassroots organisation with 650 chapters in universities and colleges across 100 different countries.

“I know about Tibet only through the lens of my father and grandmother. Their stories of fear, oppression and escape from Tibet is how I understand my relationship with Tibet."

“It is challenging to keep our movement alive, negotiate inter-generational perspectives, preserve and protect our culture, as well as balance and ensure unity amongst all factions of opinions that struggle to keep community cohesion. Even though there are opposing opinions, young people both standing for election and voting derive their inspiration from the ‘seed of democracy’ sown in the 1960s by the Dalai Lama, followed by a charter in 1991 and then reforms in 2001 and 2011”, she adds. Laying the democratic foundations has been instrumental in shaping the psyche of Tibetans which now forms the core action and vision of the Tibetan movement.

Choehan passionately narrated her father’s escape with his parents from Tibet to India, noting that on several occasions they had no food to eat and ‘had to boil their shoes to drink soup made of it’. As she recounted the demise of her grandparents on the way from Tibet to India, being born in exile and growing up in India, I was struck by the resilience of the community. Every Tibetan has a story of struggle, frustration and separation from their families, and with it, a deep resolve to share it with the world. Choehan’s coffee is getting cold, she hasn’t touched it; her expression is fiery as she describes the dynamics of Tibetan democratic processes and the role of youth in ‘carrying forward the baton’. “Youths have ideas. We use creative ways to include and connect with all. Our approach to building peace is inclusive”, she says.

Choehan’s coffee is getting cold, she hasn’t touched it; her expression is fiery as she describes the dynamics of Tibetan democratic processes and the role of youth in ‘carrying forward the baton’.

As she describes their strategies, Choehan spreads her hands wide in a sweeping manner, a gesture of the diversity and inclusivity that remains their mantra for advancing peace, non-violent communication and dialogue. "The democratisation of our movement and ensuring inclusivity is important to keep the unity,” emphasised Choehan. She described how they have used songs and arts to provoke a response and build solidarity with Tibetan and non-Tibetan youths. Citing several episodes, events and examples she adds, “We have organised band expressions, live music, poetry reading to blend traditional cultural values with contemporary forms to make it relevant for our generation”– certainly a tool for promoting their political struggle. 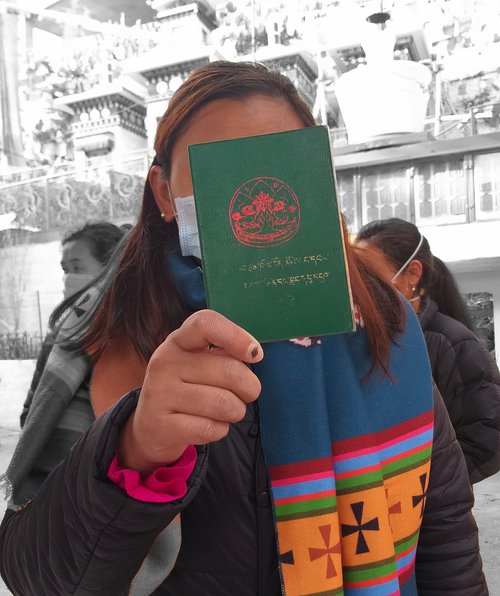 A platform for peace

Various political and social dynamics underpinned the recent elections. Tibetans took to the polls against the backdrop of an India-China standoff in the Galwan Valley, located in the southeastern border of the Union Territory of Ladakh and Tibet. A generation of Tibetans aged between 30 and 50 arrived with a razor-sharp acumen for global geo-politics, and a clear sense of their collective vision for peace. Their perspectives interweave community peacebuilding with Tibet’s global projection as Asia’s hope for harmony.

From electoral processes to strengthening democratic institutions, cultural resistance to lobbying and networking with governments, the next generation are leading efforts to take on political roles, contest elections and take their struggle for peace and democracy to the next level. In a world ravaged by violence and hostility, their methods present a unique model to respond to conflict in their own lives. I also spoke to Tensing Kalsang, one of the candidates who has made it to the final round to become an MP, currently in 17th place in her region, Utsang. She was born and brought up in India and currently a Tibetan and gender activist. In 2018 she co-founded Drokmo, an organisation working on gender issues. As Kalsang says, “Our elders did not have a ground beneath them. They struggled to survive and make ends meet but we have a solid ground beneath us”. As the next generation brings their wisdom, experience and energy to their struggle, it also recognises its longevity and the ongoing momentum in His Holiness the Dalai Lama’s courageous leadership. “The election process and electing our government (though not recognised by India) gives legitimacy to the representation of the Tibetan people inside Tibet. By asserting and ensuring this legitimacy, we sustain our separate identity, an identity which is not Chinese but Tibetan. This is important for us”. In the bigger context, this is crucial for young Tibetans. Tenzin Jigdal, currently in third place among candidates shortlisted to become MPs, is contesting from the Dotoe region in Tibet. Raised in India and the UK, he has been very active in the Students for Free Tibet (SFT), and was President of the network in the UK. He is currently International Coordinator for the International Tibet Network. When I spoke to him, he pointed out, “It is important to remind ourselves that this idea has to pass on to the next generation”.

The perceptive, compassionate and visionary leadership shown by youth-led grassroots political organisations like TYC and SFT, as well as His Holiness the Dalai Lama, provide a platform for youth activism and expression. It stems from a democratic ethos and inclusive strategies that ensure unity of the people of Tibet. In the words of Sonam, “Different groups and organisations might have different opinions and political positions but we all communicate with each other to arrive at best solutions for better peace”.

Among the young Tibetans I spoke with, all of them emphasised that community cohesion and unity is a priority for the next generation. While young people in exile may not have their feet on the physical land of Tibet, they are the first generation with the fursat (time) to strategise for peace and reconciliation. By focusing on inclusivity, democracy, and bridging intergenerational and ideological divides, they are keeping the flames of peace alive from a distance. A new narrative is theirs to craft.

Peace education Transitional justice and reconciliation Children and youth Refugees and IDPs
Disclaimer: The views expressed in this article are those of the author and do not represent the views or position of Peace Direct.