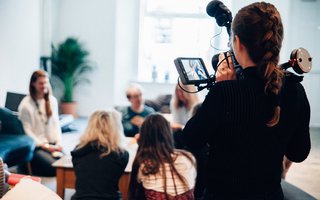 When journalists around the globe were hailing the Nobel Committee’s recognition of independent journalism as a fundamental tool of peacebuilding and democratic transformation, we in Lebanon were facing an ugly truth. Journalists are sometimes spreaders of the abusive and threatening language which they are supposed to counter.

My friend Lokman Slim, a writer, publisher, filmmaker, archivist and human rights defender, was shot dead in February 2021. A recent 34 page report by the Samir Kassir Foundation, named after a prominent journalist and historian assassinated in 2005, examined the defamation that targeted Lokman. It stated that "the hate network focused mainly on accusing Lokman Slim of collaboration with Israel” which is a high treason crime in Lebanon, as if to justify his murder. It is horrifying and sickening that “the greater damage was done by prominent public figures”.

Worse yet, these public figures were journalists and prominent media personalities with significant visibility on social media platforms, dedicated to hate speech instead of peace journalism. I cannot call them "colleagues". This is not how I see journalism. We musn't forget that there are many people around the world dedicated to the pursuit of honest, non-violent and ethical news reporting.

Although I have had a love for journalism since the age of fifteen, I am well aware that this profession is a business. I recall in some editorial meetings at a newspaper where I used to work, considered the best in Lebanon, how we were encouraged to find sensationalist stories, regardless of their content. I defied this approach as much as I could. At an enlightening symposium entitled "War Stories, Peace Stories” that I attended in New York in 2018, I was relieved to hear prominent journalists share examples of similar pressures. Most of them became independent to focus on good journalism.

If you ask me what I mean when I say “good journalism”, I would say “peace journalism”, because I think the term includes critical investigation, human rights monitoring and socially responsible reporting. Although I have a degree in journalism from a prominent Lebanese University that followed an American curriculum, the concept of peace journalism was never even mentioned. Peace journalism is not limited to the academic and theoretical definition explained by the likes of John Galtung. For me, what’s more important than the definitions and academic training is the practice itself. You need a critical mind and intuitions for peace journalism; you need a heart.

If you ask me what I mean when I say “good journalism”, I would say “peace journalism”, because I think the term includes critical investigation, human rights monitoring and socially responsible reporting

Ironically, the way to truly understand what peace journalism means is through reporting in a war or post-conflict context. In September 2005, at a relatively young age, I went to Afghanistan to cover the first general elections there in thirty years. I will never forget that the managing editor was opposed to sending me there, saying that the newspaper would not be able to help me if I were raped. He pretended to worry about my safety, but implied I was inferior to my male colleagues. His crass remarks triggered my defiance. I was determined to challenge myself physically and professionally and prove him wrong.

The trip was exhausting, moving around in the North before reaching Kabul. As a group of journalists from Arab countries, we visited the Fatima Zahra girl’s school in Pulikhumree (meaning the birds' bridge) in Baghlan province. Many of the male journalists skipped that stop. To me, it was the best thing I saw in Afghanistan, way better than my high-profile interview with the then President Hamid Karzai, in which he ironically told me that the Taliban would never control his country again. Unlike that interview, my feature on that girls’ school never made the front page. My superiors thought it was more "juicy" to highlight the words of a puppet president in a well guarded palace than to focus on the aspirations of young females, aged 12 to 16 years old. They may well have been among the women who recently resisted the resurgence of the Taliban, whereas Karzai’s successor, Ashraf Ghani, fled during the takeover in August 2021.

These young women are peacebuilders; they were then, even when I first met them. Despite the threats surrounding educating women and girls, they were tutored at home during the first Taliban reign. Their dreams, such as riding a bicycle and wearing tight jeans, were acts of resilience and defiance. Their "school”, with the use of tents for classrooms and ground holes for toilets, was financed by the French government and regarded among the best in the country.

I hope Andishi one of the girls I met on that trip, is safe and sound. She was 14 at the time and had learned English with the help of a private Afghani instructor. She wanted to study medicine to save women from dying at an early age. Mariam, then 16, a former refugee in Pakistan where she was taught English, had plans to run for the next elections to "make life better for women".

She was more ambitious than some of the actual candidates I met. Shafika from Mazar-i-Sharif evoked the traditional roles attributed to females when she answered my questions. "Women run families and they could run ministries", she said. Perhaps she couldn't rebel against these stereotyped roles, and didn't have a better argument about the legitimacy of women's involvement in politics.

In 2016, in a fascinating book entitled "The Lovers", Rod Nordland, the Kabul bureau chief for the New York Times, revealed that nearly all female politicians and public servants were beaten at their homes.  Massouda Jalal, Afghanistan's first Women's Affairs Minister, was one of them. When I met her in 2005 and 2009, she told me that Afghan women held the worst ranking worldwide when it comes to domestic violence, as well as the poorest access to legal assistance in a "female-hating environment".

The book, which I highly recommend, was meant to document the socially impossible romance between Zakia, a Tajik, and Ali, a Hazara - two young neighbors in rural Bamiyan.  However, what it does instead is serve as a practical example of peace journalism. It shares reliable insights on the status of women in Afghanistan and the human rights abuses committed against them with social and legal impunity, including child marriage and honor killings. All this goes against the picture presented by the West since the fall of Taliban in 2001, in which Afghanistan was saved, and its women were safe.

Nordland first published an article on the obstacles facing Zakia and Ali, in which he described how the couple had received death threats from Zakia's family. Some readers tried to help the couple leave the county by sending them money. The journalist, Nordland, and his colleague and translator felt they had a moral responsibility to try and keep the couple safe, which was more important than any ‘scoop’. As the lovers were on the run, the journalist offered them a ride to escape the police. Nordland even gave them money from his savings. He decided to put his humanity first, knowing that he had broken ‘all the rules’ of journalism.

With time, the newspaper lost interest in the story. The journalist wrote, "The couple would have had to get killed to make our news pages". After all, mainstream media is owned and controlled by an elite. Zakia and Ali are not elite figures themselves, just like the young women I interviewed on my first visit to Afghanistan.

After all, mainstream media is owned and controlled by an elite. Zakia and Ali are not elite figures themselves, just like the young women I interviewed on my first visit to Afghanistan

Rodland also covered the mujahedeen fighting the Soviet occupation. He spent a week with a militia and tried to save the life of a young prisoner of war. That was peacebuilding. I think his book proves that one can be a peace journalist even when labelled as a "war correspondent". Peace journalism fits any kind of reporting because it brings sensitivity and balance along with facts. The renowned journalist Robert Fisk, when speaking at my alma mater in Beirut, said that "journalists have a responsibility to be on the side of those who suffer". The poignancy and simplicity of these words have stuck with me, especially since fulfilling this responsibility might lead to persecution, imprisonment, and hardship.

I think his book proves that one can be a peace journalist even when labelled as a "war correspondent". Peace journalism fits any kind of reporting because it brings sensitivity and balance along with facts

I define peace journalism as reporting that advocates social and gender equality and human rights, including that of refugees. It is critical and ethical journalism, free of hate speech and political propaganda. It should be financially independent, and journalists should be well paid to resist bribery from politicians.

I think his book proves that one can be a peace journalist even when labelled as a "war correspondent". Peace journalism fits any kind of reporting because it brings sensitivity and balance along with facts

I think peace journalism is revolutionary, because it requires reporters to modify their language and mindsets as well. They have to break their own taboos and accept the diversity around them, from LGBTQ+ communities and refugees, and other minority groups. A peace journalist would support a colleague living as a refugee in a temporary camp.

Given the overwhelming and constant updates of crises and concern that reach us on a daily basis from Afghanistan, Lebanon and elsewhere, and the threats still posed by COVID-19, journalism should serve as an asset for accountability, hope and peacebuilding. Given the growing crackdown on the freedom of expression, this is as important as ever. Peacebuilding is needed in our media spheres to detoxify the hate speech and glorification of assassinations we too often see. It won't be achieved overnight.

It is always hard to address the demons within, but it is worth it. I know it is. The Nobel Committee’s recent recognition of independent journalism as a fundamental tool of peacebuilding and democratic transformation sent us, Lebanese journalists, a much-needed message of hope. Those spreaders of abusive and threatening language who targeted my friend  and continue to make the rest of us feel threatened, represent the dark side of our profession. Yet still, they are not the norm. Peace journalism is the norm. It is the journalism of hope.

Latest from Lebanon and Afghanistan →