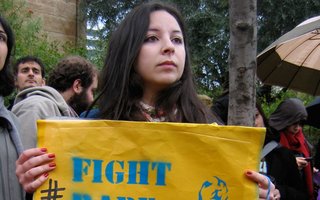 I am short of words when explaining to foreign friends and colleagues the complicated Lebanese crisis. Then I attribute everything to the impunity ruling my homeland since 1989, when the perpetrators of the civil war turned into politicians with self-granted amnesty without transitional justice and reconciliation.

Lebanon is both a conflict and post-conflict country. Many citizens remain internally displaced and the fate of thousands is unknown. Although an internationally brokered agreement ended the large-scale fighting, mini-wars still occur: in Northern Tripoli between 2007 and 2014, Beirut in 2008, Southern Abra in 2013 (I have disturbing memories of both), and back in Beirut in 2021.

I am evoking the past because an unprecedented 80-page report has just detailed the nature and scope of gendered crimes during the “Lebanese Civil Wars,” a term adopted by the document for “different massacres/clashes between 1975 and 1990.”

We – journalists, peacebuilders, human rights defenders, and feminist activists – learned about the report from an article in the Guardian, and not many read the whole document. It took me some days to prepare myself for its “graphic descriptions of sexual violence.”

When I finally read it, a young woman came out about being raped two years ago at a cultural hub I know in Beirut. This isn’t a coincidence. Had the old perpetrators of sexual crimes been brought to justice, perhaps harassment, rape, and shaming of women would be less frequent nowadays. 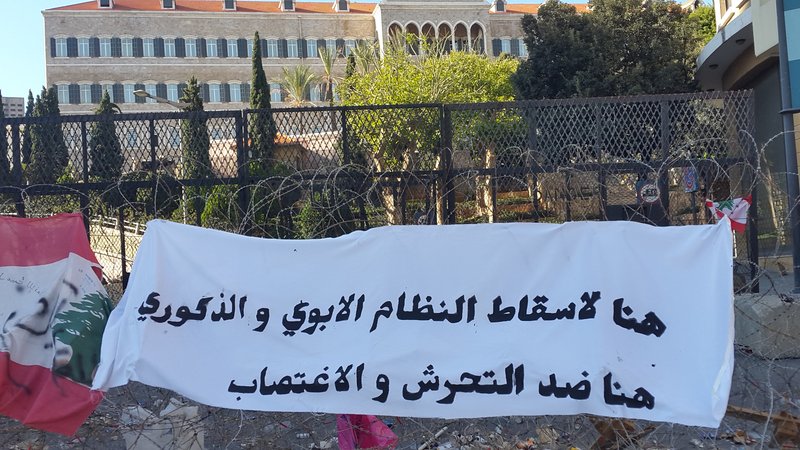 Photo provided by Sawssan Abou-Zahr, taken during the 2019 revolution, close to the Lebanese parliament and government. The banner reads: ' We are here to put down the patriarchal and masculine system. We are here against harassment and rape.'

Rape “in every possible way”

For the report, UN Women commissioned Legal Action Worldwide (LAW), an independent organisation of human rights lawyers and jurists working on conflict areas in the Middle East, Africa, and South Asia, with a particular focus on transformative justice.

It found that state actors, along with state and non-state aligned militias, “systematically” practiced sexual violence on a “significant scale,” including rape (sometimes with bottles), gang rape, mass rape, genital mutilation, sexualised torture (breasts’ electrocution, beating when menstruating, and forced prostitution), and killing of women (even pregnant) and young girls after rape.

It also explored women’s role in militias: being combatants, nurses, cooks, intelligence and logistics officers. I was shocked as one interviewee “trained by non-state aligned militias” spoke about “women who are weak and get raped, and women who were fighters and strong.” What a horrifying statement downgrading those who resisted sexual violence and died because of it; let alone inaccurate, as another woman combatant admitted that “female fighters were subjected to harassment within their militias”.

One of the report’s primary recommendations was the necessity to empower the National Commission of the Missing and Forcibly Disappeared by providing it with information and supporting it in the collection of further evidence. This is especially important as relatives of the disappeared still face extortion by persons and organisations claiming to possess information about their loved ones.

Amid “the patriarchal practices, customs and traditions which were prevalent in Lebanese society at the time and continue today,” the father of a missing husband could take his children away from their mother. And “women were not recognised to speak up in public or carry out legal and administrative procedures on behalf of their family,” such as selling properties. They have to present a death certificate of the abducted relatives, which they refuse because it undermines their right to truth and accountability.

I discussed the report with Anis Fadl Mohsen, board member of the Palestinian Human Rights Organization and a Palestinian-Lebanese researcher who had documented several rape incidents of Palestinian refugees during the war.

LAW’s team collected data from unspecified “eight geographical locations” and spoke about “a massacre” or “the massacre” without further information. Mohsen believed that anonymity should have been used only for survivors, whereas other details must be explicit for credibility and accuracy.

The recommendations didn’t address the Lebanese authorities but called for increasing women’s roles in truth-seeking, reconciliation and peacebuilding. Mohsen wondered if that was meant not to disturb “the system” established by the same warlords who ordered the crimes in question. The report admits that “the political elite do not have an interest in both truth and accountability, and Lebanese civil society has remained too weak to demand this in a meaningful way.”

Asked if Palestinians and Lebanese survivors could join hands for justice, he answered: “Why not? Both have victims (and perpetrators).”

He argued that “restorative justice offering restitution is not enough, nor putting scapegoats on trial sparing their warlords,” adding that “accountability is an ascending process hindered by the infamous Amnesty Law.”

I think a female survivor summarised “the damaging implications of the reluctance to address the past” by saying, “The war is still going on, our practices and our speeches are still similar to that of the war.”

Mohsen thought it changed nature: “The warlords nowadays practice economic crimes impoverishing the Lebanese people because they were never held accountable for their human rights violation.”

Therefore, he wasn’t surprised that 50% of participants in an online survey by LAW still have feelings of revenge, stating, “this is the result of legalised impunity”. However, we both wished the researchers specified the sample’s age range, and the percentage of Lebanese and Palestinians, Muslims and Christians.

Mohsen believed that the obstruction of justice in the deadly Beirut blast of 2020 is another result of longstanding impunity in the country, which also made the wars in Syria and Yemen more brutal. Perpetrators there know they can escape justice similarly to warlords in Lebanon.

Despite being sceptical of the performance of some UN bodies (UN Women commissioned LAW) preparing reports without sustainable follow-ups, Mohsen acknowledged the importance of the report in calling for an international committee to pursue justice in all crimes against humanity committed in Lebanon.

I say they definitely include Beirut’s explosion; and believe local peacebuilding, feminist, and human rights communities should use the report in their work to break the chain of impunity.