Right to Information Movement in Jammu & Kashmir from Insight on Conflict on Vimeo.

“In the last 20 years both, the state government of Jammu and Kashmir and India have given priority only to the political and security aspect of this region, whereas governance, social issues and accountability have take a back seat”, Dr. Raja Muzaffar said with an upset tone. A dentist by profession, Dr. Muzaffar is spearheading the Right to Information Movement in Jammu and Kashmir which he thinks is a potential tool for peace building in the region. “It is because of this weapon that we can bring real democracy, justice for all and ensure that rights of the people are protected”, he reiterates.

Dr. Muzaffar’s fellow activists, almost 20 of them from different villages, sitting with him in a circle in Citizen Council’s room in Chadoora, District Badgam almost an hour’s drive from the capital city Srinagar, agree with him. “When the oppressed and poor will get their rights, militancy will automatically go away”, they opine, which may not be accepted by all but clearly for the people who have joined the movement, they are convinced that RTI is the answer for social justice , good governance, accountability and transparency which in turn will bring peace. “Yahi hatiyar yahan aman layega (this weapon alone will bring peace here)”, they raise their hands and shout in unison.

The journey of these brave hearts started when Dr. Sheikh Gulam Rasool, a mobile medical officer working in far flung border villages under Border Development Program run by the state government, met the local villagers. “I noticed that in the far flung areas, a common person had to struggle even for a ration card [a government subsidy card]. There was diktat of local politicians, contractor mafia and oppression by landowners”, he shares. His friend, Dr. Muzaffar, who used to visit him often, started interacting with the villagers Dr. Rasool attended to his patients. Dr. Muzaffar inquired from people about their problems. “Today this has taken the shape of a RTI movement as common people are joining us”, says Dr. Muzaffar. However the crusade for justice and peace is not without its challenges and dangers. In Branwar, a border village when the local Awami Insanf Committee ( People’s Justice Committee), which is now the local RTI watchdog, exposed irregularities in a government scheme, the local politicians and timber contractors influenced the police to arrest the activists on baseless charges of theft and even sent their goons with axes to attack them. “We had to hide in the jungles and some of our activists were put behind bars with criminals” says Dr. Muzaffar.

Visibly charged and agitated Mushtaq Ahmed Mir, Nazeer Ahmed, Mohd Iqbal Nadem and many other members of the Awami Insaaf Committee sitting in the room however seemed undeterred in their pursuit. “This has given an entry point to the oppressed to seek justice and we are not going to give up” says Dr. Muzaffar. Letters to Chief Minster of the state and other RTI activists across India as also ensuring editorials in local newspapers highlighted the need and urgency to reach justice to the common people in Jammu and Kashmir, a region laden with conflict and violence. For it the common people whose aspirations are exploited by the separatists to help form their constituencies for extremist and divisive politics. An effort towards weaning the common people away from separatist constituencies through participatory governance may build secular structures and politics. The success stories wherein villagers have been able to get drinking water to their villages or shelter sheds for Below Poverty Line people have emboldened the spirit of the villagers. “ I am seeking answer as to how many illegal rice mills are operating in our residential area as one of the mills adjacent to my house has made it impossible for us to live there”, says Hilal Ahmed Bhat. With a bundle of documents under his arm, indicating the long battle he has been engaging with the different authorities, Hilal is confident to get justice. So is Shakeela, headmistress of Government Girls High School, Raipora, District Badgam is planning to file an RTI on behalf of her school. “The entire building is almost collapsing and it is unsafe for 130 children and 13 staff members to be here”, she said pointing to cracked walls, flooring and caved in roof. “We have no option but to fight for our children’s safety and schools infrastructure through RTI”.

The RTI team is slowly spreading awareness about the Act to the public through workshops and seminars through out the state and its heartening to see when people from Jammu region call up RTI Movement activists for advise on how to seek justice, clearly an issue which is connecting people divided otherwise through politics, identity, ethnicity and religion. 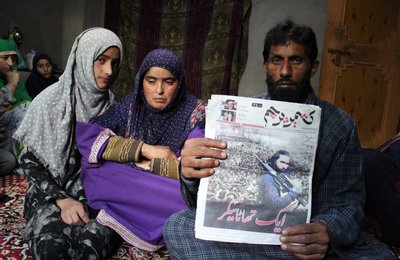