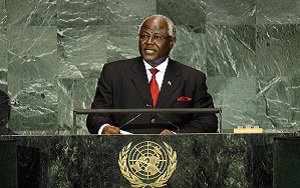 The Supreme Court has supported president Ernest Bai Koroma's decision to sack his vice president. Image credit: United Nations Photo
Many have perceived the sacking as unconstitutional
On 9 September, the Supreme Court of Sierra Leone ruled in support of President Ernest Bai Koroma's decision to sack his former vice president. This verdict stems from previous events which took place on 17 March 2015, when Vice President Alhaji Samuel Sam-Samuna was sacked from his duties by the President, following an alleged request for asylum at the US Embassy. This decision evoked some public outrage, with many perceiving the sacking as a breach of Sierra’s Leone’s constitution and legal process. Samuel Sam-Samuna had previously been expelled from the ruling All People’s Congress (APC) under the claim that the supposed asylum bid ‘demonstrated willingness to abandon his duties and office and Vice President’. The sacked Vice President sought redress from the country’s Supreme Court, and the court ruling was eventually announced this month, a little later than expected.

Five Supreme Court judges, who had the herculean task of making this crucial decision, finally gave an overwhelming ‘yes, yes, yes, yes and yes’ in support of president Koroma’s decision to sack Sam Sumana. The judges ruled that the president had the constitutional right to relieve the former VP of his duties without recourse to a parliamentary impeachment procedure set out in section 50 and 51 of the country’s 1991 Constitution. Because Sam Sumana had been expelled the ruling APC party, Justice Vivian Solomon stressed in her ruling that ‘ceasing to belong to a political party expressly created a vacancy in the VP’s position and therefore, the president had right to replace the former VP.’ Failure to do this, she added, ‘would mean failure to discharge his duties as president.’

The judges ruled that the sacking was constitutional because Sam Sumana had ceased to be a member of a political party
A court injunction was tendered earlier this year by lawyers of the sacked Vice President, asking the Supreme Court to restrain Sierra Leone’s newly appointed Vice President – Victor Bockarie Foh, from performing his duties until a court decision is reached on ‘whether the country’s constitution gives the President power to sack his vice’.

The legal team of Sam Sumuna challenged the president’s actions on two grounds. First, they were demanding  an answer from the Supreme Court  on whether the ‘constitution of Sierra Leone empowers the president to remove the vice president’ from office in a manner other than ‘the procedure set out in section 50 and 51 of the 1991 Constitution.’ Secondly, they also wanted to know whether the ‘Supreme Executive Authority’ mentioned in section 41 of the Constitution includes the power to relieve the former VP of his responsibilities. While the plaintiff’s legal term was arguing that no provision of the country’s constitution gives the president right to sack his former VP, the defendants were however arguing that the constitution did make such provision.

Chairman of the panel of judges, Valesius Thomas,argued that ‘indeed section 50 and 51 of the constitution did not give the president right to sack his former VP, though it does state the circumstances under which people in both offices (president and vice president) can be relieved of their responsibilities.’ He stated that section 41 (1) of the same constitution, which states the qualifications to be a president or vice, said that no president or vice president can run for any of these positions as independent candidates: ‘Party affiliations are prerequisites for these positions during and after elections’. When ‘a sitting president loses one of these qualifications, the president has power to appoint another vice.’ Another of the five judges, Justice Vivian Soloman, added that the president had the executive authority to remove his former  VP from office since Sam Samuna had earlier ceased to be a member of a political party.

The public reaction: what the verdict means for peace

The former VP has called the sacking a disgrace in the judiciary
The dismissal of the former VP in March sparked some outrage in the nation, particularly amongst civil society organisations. The West African Civil Society Forum (WACSOF), which works to create an avenue through which civil society organisations can engage with the national authorities, viewed the situation as unfortunate in light of the country’s recent history. They had perceived the country’s ability to review the crisis as a serious test, and therefore had urged that pressure be brought to bear on all parties to the constitutional matter.

Similarly, the West African Network for Peace Building had raised concern about the growing tension over the sacking and had proposed the establishment of a 9 man committee that could serve as a mediator and negotiator for a peaceful resolution to the crisis. All these efforts fell on deaf ears.

After the ruling on 9 September, the former VP gave his reaction on BBC’s Focus on Africa radio program: ‘It’s a disgrace in the judiciary. With a pedigree, I would for once think that they would stand up to the movement and be independent and dispense justice as one of the three arms of government. I’m very much disappointed in the judiciary that they did not stand up to the moment.’ The former vice president acknowledged that if his supporters were angry, they should be ‘because of what they had been ripped of. It’s not for them today, it’s for generations yet unborn’. The lawyers of the sacked VP have threatened to take this matter to the regional ECOWAS court.

The public awaits with abated breath for the next move of the former VP
Although the ruling party supporters celebrated the verdict, the general public reaction has been unsurprisingly quiet. Even before this decision was handed down, many had predicted that the former VP’s court action was an already beaten attempt. From the perspective of the general public, this matter was a litmus test for the country’s judicial system. From a conflict perspective, the public had earlier made anxious references to experiences from South Sudan, where a controversial dismissal of a similar nature led to political instability. For now, the public waits with abated breath what the next move of the former VP will be in the next weeks or months.
Abdul Brima is Peace Insight's Local Peacebuilding Expert in Sierra Leone. A radio producer and presenter on BBC Media Action Sierra Leone, he has worked with rural communities on conflict and development issues in Sierra Leone and Liberia.
Read more from Abdul Brima