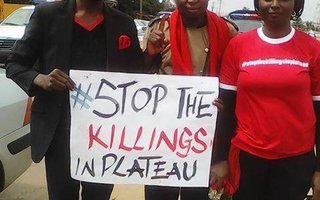 I am a Muslim, I am 40 years old, and I am the second child in a family of ten kids. All ten of us went to different missionary schools where we met different and diverse people from different ethnic and religious backgrounds, where no-one cared what your tribe or religion was. The most important thing was our shared and common humanity. Some years down the line, the story started to change:  we now live in a segregated community and also attend segregated schools.

The once peaceful society turned out to be a society of violence and conflict, where each religion perceives the other as a threat, and each tribe feels unsafe because of the other. There is deep-rooted mutual mistrust, resentment, and even animosity among the people.

Some people are labelled terrorists just because of their religion, and on the other hand, some are also wanted dead simply because they are not from the same faith.

As a peacebuilder, handling peace when my religion is involved in a conflict is to hold onto the ideals of peacebuilding. That means seeking to resolve the conflict by not allowing my emotions to get the better of me and by using virtually all the peace development mechanisms I have available. The most powerful aspect involves dialogue and peace talks. I believe that we cannot talk enough, so let us keep talking to learn from, understand, and respect each other.

As Africans, most of us believe in one religion or another, and to build peace when my religion is involved, I wear all the attire of peace as enshrined by my holy book, the Koran. I once said to a group that we all have the same God, but understand differently, and we have the same devil, who divides us equally.

For me, I think there is something fundamentally wrong with religion; either the structure, how humans have chosen to go about it, or people that do not understand religion.

In my community, I see people who want to monopolise God, and ultimately it leads to violence. This happens because many do not understand the teachings of their faith, which clearly spells out how to develop peace between and within us as a community.

So, what do I do when religion is at stake? I involve some principal members as well as the stakeholders of the other religion as well as mine, so that there can be a meeting point where we smooth all the rough edges and merge all our religious teachings on peace and peacebuilding, through which we are able to reach an agreement while looking for areas to work together.

We cannot be sharing the same bank, mechanic workshop, electrician, transport systems, market, office space, or even the same economic hardship and claim to be divided. We are united but have almost intentionally refused to see things the same because we interpret reality from sentimental lenses.

I remembered vividly in the late 80s and early 90s we could not differentiate when Sallah, Christmas, or Easter was because we celebrate all. It’s still fresh in my memory when we would visit my mother's homeland to celebrate Christmas and New Year, but today I am seen as a threat and I also see them as an enemy; what a world.

It’s funny how things change. I have seen several crises from that in Kaduna, Plateau, Bauchi, etc. Water has no colour, and nor does religion or ethnicity. I want people to see me as that beautiful African woman, but I am seen as a threat to people of different religions and different ethnic groups. If wishes were horses, I would wish to go back to the time when we were living together side by side as neighbours and brothers. And that’s what I work to see as a peacebuilder.

My name is Sumayya Abubakar, born into a Fulani family. Telling this story makes my heart drown in a sea of nostalgia for so many things which are engendered by a lifelong relationship between me and my reliable master ‘the cow’.

Remembering my experience at the ‘Ruga’ [human settlement policy], the atmosphere filled with the sweet scent of grasses and shrubs, the unique smell of the cow’s body and its milk, the fresh air and clean stream water; the hospitality of the surrounding landscape of planes, rivers, hills, and mountains.

After all these peaceful life experiences, I am now seen as an endangered species and have become a subject of controversy, resentment, and distrust in the worsening security narrative of present-day Nigeria; the herdsman versus the farmer.

In reality, we are both farmers, whether rightly or wrongly. While the Fulani race is being perceived negatively, there are several contradictory narratives that have become the dominant narrative. We love our cattle, and that is true, but so do we love our neighbours irrespective of faith and creed. We are who we are, it is humanity first, and understanding the narratives we have fixated on an ethnic group and religion, and a life skill and economic livelihood. At the expense, we forget the Fulani Christians, the Fulani medics, Fulani artists and creatives, and replace them with the Fulani herdsman, and Fulani Muslims.

The people have forgotten that the present United Nations Deputy Secretary-General, Hajiya Amina Jane Muhammad, is a Fulani. We have some of the best medical doctors like Professor Jibril Aminu, very good writers like Dr. Aliyu Tilde, and very well-educated Fulanis that went through conventional education and not nomadic education, doing great in all aspects of life.

Being a Fulani mother, I have to make sure that my kids are not stereotyped for just being Fulani and also not being accused of what they are innocent of, to also have them believe in the good culture and heritage of their people and tribe.

My voice as a Fulani wife has long been lost in the sands of time.

So where do we go from here?

The Fulanis who are mainly herders are known to have peacefully coexisted and shared inter-communal and mutually beneficial relationships with other groups based on trust, understanding, exchange, and respect for each other in the past. This kind of harmonious coexistence gave rise to a wide range of cultural ties including inter-marriages in some cases and other forms of cultural exchange and mutual solidarity.

However, events in the recent past have clearly shown a deterioration in norms and values among the Fulanis on one hand and their neighbours on the other, and this ugly turn of events has further undermined relationships between the Fulanis and other groups across the country.

Growing tensions have significantly shattered this long-established social relation and in its place are entrenched deep-seated mutual suspicions and resentments between the Fulanis and other groups who now perceive them negatively; as associated or synonymous with crimes and criminality. As a daughter, I bear the consequences.

As a girl, I feel neglected and abandoned by everyone including the government. Are there really programmes to give us an education? We do not ask to be treated specially, but there is a direct correlation between the collapse of education and crimes that the nomads commit, of course leaving an allowance for other socio-economic factors that have been listed time and again. As a girl, all I want is for the forests to roar with the sound of knowledge instead of the sounds of only cows and guns.

We cannot stay put on the narrative and story of Fulanis only being capable of herding as their major occupation which forced them to roam about to different locations in search of pasture for their animals – which is now highly competitive, in this struggle over grazing fields. 21st century technology can be used in terms of scope, intensity, and legality, to solve this problem while exploring all forms of dialogue as the peacebuilders that we are.

Women, Peace and Security Transitional justice and reconciliation Technology and peacebuilding Sustainability
Disclaimer: The views expressed in this article are those of the author and do not represent the views or position of Peace Direct.