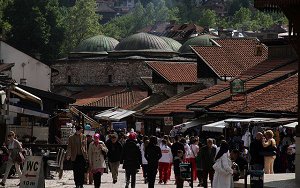 As Sarajevo recovers from the horros of war, it is playing host to a number of vibrant initiatives supporting peace and reconciliation. Image credit: Andreas Lehner.

The First World War was infelicitously called the 'war to end all wars,' a phrase coined by HG Wells in his coverage of the conflict. History proved otherwise: the hard-fought peace proved fleeting and some 20 years later, the Western world was plunged once again into global conflict. As the world order has evolved in the decades since, so too has the structure and nature of conflict. Nonetheless, as any reader of world news knows, conflict itself remains widespread.

War correspondent Rémy Ourdan has made a career out of documenting such conflict. His résumé as a reporter for Le Monde includes stints in Afghanistan, Egypt, Rwanda, the Congo and Pakistan, among others. It is a career he describes as living alongside people who are experiencing the most important and dramatic time of their lives. His passion for war reporting is decisive: “[Le Monde] gives me money to travel and space to write,” Rémy muses. But even if it were not his job, he would still go to war zones to listen to people. “And if I have an opportunity to send out a message, the story, I will do it.”

Sarajevo - a city of war, peace and nonchalance

It is also the city in which he decided to establish the central branch of the WARM Foundation (War Art Reporting and Memory), an organisation dedicating to bringing together artists, reporters, academics and activists around the topic of contemporary conflict. “Sarajevo survived,” Rémy explains. “It is also a symbol of resistance.”

In an era of fleeting public attention, where audiences are increasingly impervious to the images of human suffering that permeate their television screens, Rémy doesn't report with the goal of shaping policy or generating a particular response from Western governments. Rather, he sees himself as a messenger for those people who are living through war: “I wouldn't betray those people I meet in Libya or in the Central African Republic,” he emphasises. Whether Western readers react to his reporting, well, that's up to them.

WARM has gotten its start supporting several projects including Abounaddara, a group of anonymous filmmakers involved in emergency cinema in Syria and the theatrical production of The Secret of Raspberry Jam in Sarajevo.

Everyone should have the right to tell their unique stories
WARM's most ambitious project to date was launched in June 2014 with the week-long “World WARM I Festival”. Run in collaboration with the Post-Conflict Research Center in Bosnia-Herzegovina, the festival began on the centennial anniversary of the assassination of Austro-Hungarian Archduke Franz Ferdinand and his wife Sofia.

Guests from the Middle East, Africa, Europe and the Americas attended the festival, which featured exhibitions, film screenings, conferences and workshops highlighting the work of individuals who are dedicated to telling the harrowing stories of modern-day conflict. Some of the festival's featured projects were the interactive web documentary “Grozny Nine Cities”, which explores the aftermath of the Chechen wars, and the photography exhibition "Testament", which displayed a collection of photographs taken by the late photojournalist Chris Hondros during his more than decade-long coverage of the world's conflicts, including Kosovo, Afghanistan, the West Bank, Iraq, Liberia, Egypt, and Libya.

From strength to strength: the second annual WARM Festival

Moreover, #Dysturb, a network of journalists dedicated to making photojournalism more accessible to a wider audience, got involved in last year's events. #Dysturb plastered hard-hitting images in public spaces throughout Sarajevo that depicted what's happening in places like Egypt, Afghanistan, and Georgia. Additionally, on the final day of the festival, more than 120 former Libyan rebels gathered in Sarajevo for the emotional world premiere of director Florent Marcie's “Tomorrow Tripoli: Revolution of the Rats”, a documentary dedicated to their 2011 fight against Muammar Gaddafi's regime.

Every war is different, and in the same war every day is different
Following the success of last year's inaugural festival, the WARM Foundation is now planning its second festival, which will again take place in Sarajevo from 28 June to 4 July 2015. This year's event has attracted proposals from around the world, with many geared toward WARM's dichotomous approach to conflict, which it believes is shared as both a collective voice while simultaneously presenting conflict through the unique perspective of each individual who experiences it.

A theme that emerges throughout the conversation with Rémy: “In a war, it is about chaos and violence. Every war is different, and in the same war every day is different. Everyone should have the right to tell their unique stories.”

And this is the essence of WARM's mission: “to tell the story with excellence and integrity”. Its past and future projects aim to present those stories often lost in the context of violent conflict to a wider international audience, and to preserve such memories so that they can be passed on to future generations.

This is an edited version of an article by Jessica Kuntz and Leslie Woodward that originally appeared on Balkan Diskurs. A non-profit, multimedia platform dedicated to challenging stereotypes and providing viewpoints on society, culture, and politics in the Western Balkans.