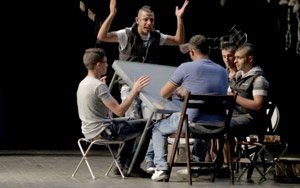 UPDATE June 2017: Big change takes small consecutive steps, and yes, dreams do come true. That café Baroudi spoke about is out there, providing economic empowerment and open space for dialogue and common ground.

A documentary was produced about the play, and the venture of building peace on stage continues.

It was on a very significant date that MARCH chose to display its second play. On April 13 2017, on the 42nd anniversary of the Lebanese civil war, young men and women representing various neighbouring areas of Beirut starred on stage, along with two refugees, a Syrian and a Palestinian.

The story is about auditions for a talent show hosted by a café named Houna Beirut (Here is Beirut). All the inherited stereotypes and prejudices a young Sunni has about a Shiite and vice versa, a Christian about a Muslim and vice versa, are there. The language is blunt and bold, and we, in the audience, laugh to tears for the sight of ugly sectarianism smartly mocked in front of us.

Suddenly there is a breaking news bulletin. An on-the-run suicide bomber is thought to be hiding not far from the café. Everyone is a suspect in the eyes of others, and everyone is on the offensive. A drugged guy stands out saying the bomber must be someone like him escaping the bitter reality with illusions and hallucinations. It was him... In a glimpse, the laughter turns into heavy silence. However, that shocking twist in the plot was much needed to bring us back to reality, it was April 13 after all. Even after death, the characters, except for two, were still arguing about the Sunni-Shiite differences.

Are those disputes bigger than life and death? Only one Sunni and one Shiite realised there were no differences between them. But was that too late? The characters were all killed on stage, Sunni, Shiite, Muslim, Christian, but in real life, they just made this amazing discovery, they were similar, they share poverty, unemployment and big dreams of a better life. And those dreams have no religious or political identity and can defy sectarian prejudices.

The Syrian war is being fought by proxy in Tripoli
Imagine that ‘Montague’ and ‘Capulet’ were two neighbourhoods, not the names of two feuding Veronan families. Two underprivileged neighbourhoods nestled in a city where love is forbidden and killing is almost a daily practice.

In modern day Lebanon, Montague and Capulet would be Bab al Tebbeneh and Jabal Mohsen in Tripoli, the country's largest city. These neighbourhoods are similarly impoverished and troubled: the only difference is that the first is Sunni and the latter Alawite.

According to a study by the Economic and Social Commission for Western Asia (ESCWA) published earlier this year, 87% of the households in Bab al Tebbeneh are considered deprived, 52% of these live in extreme deprivation. The situation in Jabal Mohsen is strikingly similar.

The socio-economic problems in Bab el Tebbeneh and Jabal Mohsen have become more acute during the ongoing crisis in Syria. The Syrian war is being fought by proxy in Tripoli. The Sunnis of Bab el Tebenneh are against the Assad dynasty. In fact, in 1985, Tripoli's Sunni Islamists were brutally crushed by Syrian troops. Feelings of hatred towards the Syrian regime grew after the assassination of late Lebanese Prime Minister Rafic Hariri. On the other hand, the main political power in Jabal Mohsen is an old ally to the Assad regime. Coincidentally, the street separating the two neighbourhoods is named Syria Street.

Since the beginning of the Syrian crisis in 2011, there have been more than 20 instances of violent conflict between the Sunnis of Bab el Tebbeneh and the Alawites of Jabal Mohsen - leaving at least 200 dead. Islamic militias, both Lebanese and Syrian, have found the neighbourhoods fertile ground for recruitment: successfully targeting the young, frustrated, and unemployed.

Face to face on stage

Shortly after the guns were silenced in Tripoli by a political decision that could have been made much earlier, a Lebanese group went there seeking a different kind of recruitment: one of hope and peace. The play's title, ‘Love and War on the Rooftop’, reflects the prominence of the rooftops of Bab al Tebbeneh and Jabal Mohsen as the informal social hubs of the neighbourhoods. Regular power cuts and a lack of open public space channel the populations of both neighbourhoods upwards. Card games and secret dates are played out here, shaded in secrecy, while snipers seek strategically advantageous positions to shoot their foes.

The 16 participants, among them four females, took acting classes, and workshops on conflict resolution and communication skills. Some received death threats from political parties who didn't want them to break the mould of hatred and mistrust. It was harder for the girls, coming from the socially conservative neighbourhoods. One tells me she was beaten up by her father when they came back late after a performance in Beirut.

I watched the play twice. Frankly, I was not expecting much from the newly turned actors. However, to my surprise, there was abundant talent on stage. In fact, the director Lucien Bourjeily decided to help those interested pursue a career in acting.

As a journalist, I was originally looking for the political and social message. I didn't assume the approach would be comic as I did watch on another occasion a performance by women refugees from Syria, and it was understandably heavy, just like their suffering back home and in Lebanon. Many in the theatre choked with tears. But with those amazing 16, the same theatre was laughing loudly. The harsh life on the rooftops of Bab el Tebbeneh and Jabel Mohsen was smartly transformed into funny scenes, reflecting an Arabic proverb: "the worst misfortune is the one that brings laughter".

The show is a play within a play, a series of scenes in which a ’director’ keeps intervening.

Even the smallest details tell a lot about the socio-economic status of the neighbourhoods. For instance a girl complains about having to eat the same simple meal every day while informing her sister about the misfortunate end of a friend who fell in love with an Alawite. The guys lie about their origins to get hired. But once clashes erupt, they can't leave the area, so they are jobless again. Our Juliet is Aisha from Bab el Tebbeneh, her Romeo is Ali from Jabal Mohsen, a friend of her brother Omar.

In one scene, Ali tells Omar he highly appreciates their friendship that started in prison. The director objects. So Ali replies, "How do you suggest we say we met, in a public park? We don't have parks".

In another, the two friends are on the rooftop when shelling starts. Omar leaves after being informed a cousin was hit. His second cousin, a masked armed man appears. He is suspicious of Ali who tries to protect himself by changing his name so it won't reveal he comes from the "other side".

The team is filled with big dreams and positive energy
While pretending to help the sniper, Ali tries to distract him. He tells him not to aim at a 70 year-old, the shooter replies that his father was killed at the same age by someone from Jabal Mohsen. Ali says applying the 'eye for an eye’ principle would make everyone blind. Someone from his neighborhood hits the sniper. It is a vicious circle of mutual killing.

The most important scene occurs at the end, entitled Aicha's death. She meets Ali on the rooftop, and agrees to run away with him as both know her parents won't accept their union. Suddenly Omar enters accusing Ali of betraying him and causing the death of his cousin.

The furious brother is armed with a rifle. He touches his sister with it, so she says, "ah, so I am dead now". The director explains that both Omar and Ali mourn the passing of Aicha.

A song calling youth not to fight sends a message for unity among all Lebanese. Our Romeo and Juliet can defy the well-known end. Hope exists as the death scene is incomplete. Maybe she won't be killed after all, and love and friendship can prevail.

When saluting the audience, Khodor, who plays the director, says this project gave him the chance to be in a play when previously he thought he would never have the chance to watch one. He is now friends with Ali (who takes the role of Ali), he calls him brother.

I spent a couple of hours with the team backstage. They fill the place with big dreams and positive energy. This was a life changing opportunity for them.

Samir is from Beb el Tebbeneh and he portrays Omar. He tells me the play helped him see things differently. He is determined to use this experience to raise awareness; "if I could, if they don't kill me, as I got threats". He adds he is aware things might not change that easily, as "some people are forced to fight to support their families" and they are paid to kill.

Fatima, who played Aicha, from Beb el Tebbeneh, says, "We can influence people who haven't lost someone in those absurd clashes. We do our best, but politicians can still ruin everything". Ali from Jabal Mohsen blames those politicians as well. Asked what he would do if clashes erupt again, he tells me: "I will not fight, and will try to prevent others from doing so. I got rid of all those prejudices. We are alike, poor and unemployed".

Hafiza is the youngest of the team. She is only 16, but inspiring, strong and mature. She dreams of becoming an actress, despite family pressure and the fact that she might not be cast because she is veiled.

Khodor shares the acting dream. But most importantly, he wants peace at home. Now he goes regularly to Jabal Mohsen, and managed to convince some of his friends, who lost relatives in the clashes, to join him.

He says he wants to convey this experience to others. He might find the chance to do so in a cultural café MARCH intends to open on the old frontlines between the neighbourhoods. He already has plans for the place.

This will be a project "for them and run by them", says Lea Baroudi, a founding member of MARCH. She explains that they will be trained in hospitality, organising events and stand up comedy. It will offer a common space for families and friends and provide work opportunities. She believes development and art are key tools in fighting violence and extremism.

Yet this amazing project will not end there. Baroudi, who describes it as "a rich human experience", plans to produce more plays. New young people will hopefully break down inherited stereotypes and discover the meanings of citizenship. New stories will be told from other areas experiencing sectarian clashes, unfortunately commonplace in Lebanon.