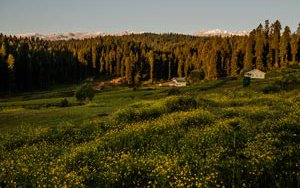 Jeshn-e-Tossamaidan ( Celebrating Tossamaidan ) Rural Voice, ‘Save the Tossamaidan Front’ Movement, the Panchayt Association Budgam and Tossamaidan Development Forum organized a two-day Festival at Tossamaidan Meadow to celebrate the people's victory of reclaiming this beautiful site for peaceful use.

All those who were part of the struggle, directly and indirectly, and who supported and inspired the reclamation efforts were invited to attend the celebration. “My request to all is to ensure your participation and grace the occasion,” commented Dr. Shaikh Gulaam Rasool, chairperson of the event. “We have reclaimed Tossamaidan peacefully through a movement supported by the people,” said a joyous Dr. Shaikh.

Tossamaidain is a picturesque meadow in the Kashmir Himalayas. Up until March this year it was used by the army as a firing range. The lease between the Himalayan government and the army was to be renewed in April 2014. “We did not even know that there was a lease which was required to be renewed every 10 years. When we filed the Right to Information (RTI), we learned about the lease. After that, our focus was to prevent the government from renewing the lease,” shared Nazir Ahmed Lone, a businessman and RTI activist in Shanglipora, one of the worst affected villages from the firing and shelling in Tossamaidan.

King of Meadows, located in central district Budgam around 51 kilometers from Srinagar in the Kashmir Valley, was a simmering conflict between the local villagers, the army and the government. Tossamaidan was leased out to the army in 1964, with the stipulation for lease renewal every 10 years. In 1974, a sheep herder tending to his flock in the meadow died from a shell that accidently exploded when he picked it up. Since then, 64 people have died from related accidents in the area. The worst statistics of death and loss of limbs comes from Shanglipora, Drang, Bhatpora, Zogu, Chhil, Khailpora, Suhailpather, Sitaharan, Lassipora and Habaer. There are 43 recorded cases of disability and approximately 16 villages have been directly affected by the noise, shelling and firing.

Forty five year old Gulshan Begum, who lost her husband Abdul Lateef Lone in 2008, survives on zakat (charity) offered by villagers. She has six children. Even though she approached the District Social Welfare Office three times, her case was not registered. On the other hand, Zaiba who lost her husband Abdul Kokkar in 2009 merely gets Rs. 200 per month. She too has six children. “Most of the cases have not been registered and no first information reports have been charged,” says Mohammad Akram Sheikh, Sarpanch from Haber, Lassipora. Claiming that 43 people have died from his village he added, “After I became Sarpanch in 2011, I took up the case with the local administration and demanded that firing be stopped in Tossamaidan. We also urged for compensation for the victims. But no one has listened to our pleas.” Akram, as vice chairperson of Save the Tossamaidan Front (which included 49 villages and 45 Sarpanches), made it very clear that their struggle was not against the army but against the actual firing and the government’s decision to lease the land to the army. “We raised our voice at different forums and took memorandums to the district collector and police,” noted Akram. Hence, when their communications and peaceful protests were not addressed, the entire group of villages boycotted the recent Parliamentary election. We were aware and awakened, and through a poll boycott we wanted to send a strong message to the politicians and the government that we were not going to accept their silence.”

Strategically, a deliberate movement was started by a group of RTI activists, who have remained the backbone of the movement ever since. Narrating the history of the movement and how it all started, Nazir Ahmed Lone said that a team of RTI activists arrived in 2010. “We became active members of that group. Later in 2013, a meeting was organized in Silgram, Arizaal in Khansahib constituency. That is where the idea of ‘Tossamaidan Bachao (Save) Front’ took birth,” shared Lone.

For peace and conflict resolution practitioners, Tossamaidan is an exemplary case of how people’s movements have the potential and possibility to resolve conflicts peacefully. Using a unique leadership and methodology to keep the movement apolitical, several tiers were built for effective management of the various groups involved.

“We elected Sarpanch Mohammad Maqbool Magrey as the chairman of the Front and the vice chairman was elected under him. Covering the entire population of 7,000 people into Shanglipora A and B, a total 60 members (30 from each segment) were included. Thus the Tossamaidan Deh Committee was formed. All 28 Panchayat bodies became members of the Front. It included organizers and coordinators, along with a secretary,” said Lone, who was appointed the overall Front coordinator. “It wass then, in a coordinated manner, that we organized our first protest program in Shanglipora. Almost 500 members participated in the protest.”

Dr. Shaikh, actively involved and mentoring the movement, advocated and educated various stakeholders, including the government and army, about the fragile ecosystem, the environment and wildlife dependent on the region. This perhaps remains the biggest strength of the movement – its ability to engage in dialogue with stakeholders and peaceful means to protest. “This place has huge economic benefits for the local people,” said Dr. Shaikh. Therefore the people have faith toward the movement and are firmly attached to the fact that once Tossamaidan is free from firing exercises it will be developed as a tourist spot, which will potentially provide employment opportunities to local individuals, as well as their children. “If tourism comes, our children will have a livelihood option,” said Zooni. She lost her son at Tossamaidan, while her husband, Abdul Salam Tantray, later died of grief. “We all know how this movement started and we are indebted to it,” commented Zooni. “I acknowledge that this movement has helped stop the firing, but it can never bring back my son. I pray that my tragedy should not befall any other mother or father.”

The Indian Army has several firing ranges; however, they are short on space for the required number of ranges. They are facing the people’s resistance as the population increases and the ranges have become a security issue for the locals.  In addition, modern guns, tanks or artillery have longer ranges, which mean existing ranges like Babina in Uttar Pradesh are already short on space. The Mahajan range in Rajasthan and Deolali in Maharashtra in Western India, Gamrala in Arunachal Pradesh in the East and Hema and Bircha in Madhya Pradesh in Central India are other problem ranges. “The bigger guns made it unlivable for the people,” says Dr. Shaikh. “Even Kargil in Kashmir does not have adequate space for appropriate weapons firing.”

However, the situation in Kashmir Valley cannot be compared with the rest of the country. In Kashmir, there is always a danger of issues being politicized and polarized either along communal, sectarian, or separatist and nationalist lines. In fact, the ruling National Conference and Hurriyat leaders did attempt to gain political mileage out of the conflict. People were alert and did not fall into the trap. The conflict could also have snowballed into another confrontation between the people and the state or state government and army; but the Tossamaidan movement remained primarily a humanitarian issue. The  people who were leading the movement or those at the grassroots level involved in it did not allow it to be hijacked by any of the typical external forces. Strategically because the movement’s approach was pro-humanitarian, environmental and ecological, rather than anti-army or governmental, it allowed the stakeholders to negotiate the conflict peacefully.  The constructive and positive contours of the people’s movement, with no political agenda attached, enabled it to rise above the myopic benefits and therefore achieve its objectives peacefully.

April 16, 2014 was the deadline for the lease to be renewed. It was not. However, the people were still not satisfied. They wanted a written and public declaration that the government would not renew the lease and the land would never be used as a firing range again. Finally, the chief minister announced that Tossamaidan would not be further used as a firing range – and the people decided to celebrate their victory.

Truly a peoples’ victory, Tossamaidan will remain a classic example of how conflicts can be resolved peacefully. “Our priority is to get the area cleared of unexploded shells and get compensation for the victims,” said  Dr. Shaikh   “Even as the army has started the clearing operation demonstrating their commitment for the safety of the locals, people are trekking up to the meadow to enjoy the beauty of the landscape.” Tossamaidan can now be returned to its natural habitat, to be enjoyed by many generations for years to come . . . and that’s something to celebrate!