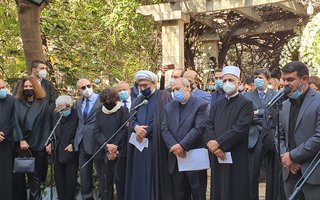 It is painful to use the past tense when writing about an admired colleague and a dear friend. Lokman Slim was/is a rebel who had a vision and dreamed big.

If you look him up on Google, you would read he was a political activist and a vocal critic of Hezbullah and their dominant grip over Lebanon. It is unjust to reduce his identity to this alone. He was a man of letters, a linguist, a publisher, a human rights defender, a filmmaker and an archivist advocating for peacebuilding, transitional justice and oral history.

"I am one thousand years old", he once told a Swedish journalist who interviewed him in my presence on October 15th, 2020. His answer didn't surprise me. "A man bigger than life itself" is an expression that best suits him. I always felt he had lived for ages because of the number of books he read, the unlimited ideas he had, the numerous projects he wanted to achieve and how well he related history to the present, especially in the complicated contexts of Lebanon, Syria, Iraq, Iran and the Middle East in general.

He was the one I would go to for insight and analysis when troubled about local and regional politics. He always answered my questions as though writing a well-structured article. Sharing evidence and dates, as if he had UMAM's archives in his head. UMAM was Lokman's lifetime mission, an ambitious project that he started with his partner and wife, German journalist and director Monika Borgmann. UMAM works on memory, arts, research and documentation, digging deep into Lebanon's troubled history and insecure present, collecting the untold stories of victims as well as perpetrators, and working to achieve justice, truth-telling and reconciliation, and building a culture of human rights for all, including refugees.

This is not an obituary, but rather a tribute to that noble man who lived on the edge of danger with grace and bravery. His legacy is ours to pursue and will live on, and most importantly we shall seek accountability and halt impunity no matter how long it takes. It has now become a lifelong cause for Lokman's family and friends, after he advocated years for it.

This is not an obituary, but rather a tribute to that noble man who lived on the edge of danger with grace and bravery

He was on the frontline supporting the families of the forcibly disappeared of the civil war. A war that ended with impunity when the warlords turned into politicians, granting themselves amnesty. He also worked on the enforced disappearances of the Lebanese in Syria. His acclaimed movie Tadmor exposed the world of horror and torture at that notorious prison.

Accountability is our only salvation. For those of us who survived the devastating Beirut blast, the families of the victims denied justice; for Lokman and everyone on the verge of despair struggling for the mere daily survival in the collapsing Lebanon .

Sadly, he was shot dead six months after the explosion. It might not be a coincidence. He was the first to fearlessly point at the role of the Syrian regime in storing deadly explosives in Beirut's port, in the city center, among thousands of civilians. In his last televised appearance, he outlined the timeline of events since the arrival of the shipment to the use of ammonium nitrate barrels in bombing Syrian towns.

I watched him that night. I had not texted him like I sometimes do when seeing him on television. I had a heavy heart.

On December 13th 2019, Lokman talked publicly about receiving death threats. When I called him in solidarity, he told me he decided to speak up only because the intimidations and harassments targeted his family as well. He was subject to character assassination long before his actual killing. He said he was accustomed to threats, but that he was neither afraid, nor going to be silenced. I was short of words and he ended up comforting me, not the opposite. To cheer me up, he suggested I set a date to meet over coffee at our usual spot at the iconic Hamra Street in Beirut.

He always showed up with a book or a newspaper, and had a small red notebook to write down ideas. We would talk about work a little and spend most of the time "gossiping", as he used to put it. He would ask me to tell him stories about the daily lives of everyone I knew, and inform him about workshops or conferences that I attended and freelance projects I undertook, especially those related to women's causes. Lokman himself had launched a nationwide program for women’s empowerment by teaching them English. He knew I worked with female human rights defenders so he sometimes had questions for me. He was very interested in understanding the dynamics of contemporary feminism in Lebanon. He wanted me to describe the International Women's Day marches in which I took part almost yearly. I would speak about the slogans, the age range of the participants, and share some observations such as elderly veiled women walking alongside nonbinary young people, and the growing presence of men and migrant workers.

He knew I worked with female human rights defenders so he sometimes had questions for me. He was very interested in understanding the dynamics of contemporary feminism in Lebanon

By "gossiping" and listening to others, I had the impression he was mentally archiving while enjoying his cigarettes and large coffee. Therefore, I occasionally brought him copies of brochures and leaflets distributed at demonstrations I took part in. I knew it was a gift he would appreciate. He always did.

Lokman loved rare books. Sometimes when we left the café and walked a little in the vibrant street, he would visit a newspaper kiosk to check if they had some old publications to buy. He considered purchasing the private book collection of a veteran journalist that we both respected, as a way of helping him financially without causing offence. A friend in common was about to start a short term project with him when they had a health emergency. I informed him and he replied: "consider it done". He immediately understood I was about to request that he pays them in advance. He had a generous soul. He always stood by his friends, especially when under pressure, whether related to health, finance, family issues, or security concerns. He was everyone's rock.

Lokman thought his work was his own revolution. When the October 17th 2019 Revolution erupted, he embraced it with joy. He was happy with the activism of young people and the leadership shown by women. We had some walks over the squares where the Revolution took place, and the euphoria was overwhelming. I was exultant too and he tried to tame my expectations. He once noticed I was wearing a shirt I got from a street vendor, praising the Revolution. I confessed to him I had a love-hate relationship with the country since 2015, and the Revolution restored my faith in change. He looked at me with a silent smile. Perhaps he thought I would be disappointed soon.

On another occasion, he advised me to resume my work and life, because change was not imminent. He was convinced that the Revolution must not only be a revolt on the economic failure. It should be more outspoken in targeting Hezbollah and their arsenal, as a starting point to a state of law. Being well aware of the local and regional dynamics, he knew it would be a complicated and long process of civil resistance. That it would require patience, planning and a lot of work beyond massive demonstrations and cheerful gatherings.

Like most non-governmental organizations, UMAM has set up camp at Martyrs' Square. Lokman had equipped it with electricity and prepared it to withstand rain. It was a hub for political and intellectual discussions, friends gathering and brainstorming. After several incidents of intimidation from thugs, Lokman moved it to another spot but the harassments persisted.

When the iconic fist of the Revolution was set alight, he came up with this motto in Arabic: "Zero Fear, 100 percent Revolution".

Now more than ever, I hear Lokman insisting on "Zero Fear". This is his will; I am sure, along with "100 percent Revolution".

With people taking back the streets in mess and riots, I wonder what he would have written or said. Some of his Facebook posts and tweets seem more valid than ever. He was a visionary whose rich life was brutally ended when it was needed most.

In my tears after his assassination, I recalled the night of the blast. Shocked and angry, I couldn't sleep despite being exhausted. Around 4am, I was nervously zapping at the TV, and saw Lokman on a satellite channel. I texted him that I was watching. I don't know why I also wrote "take care of yourself, be careful". Hours later, he sent me a voice message checking on me after he saw pictures of the shattered glass in my house and told me to try to search for the brighter side no matter what.

Back then, I couldn't. Now I feel I must, although I am not sure how.

Lokman knew I love notebooks. He got me some a couple of times and said: "fill them, write!" I promise to keep writing about causes we both believed in and worked for such as refugees' rights, peacebuilding and defying hate speech.

On a personal level, his constant advice was to learn for myself the virtue of patience. I promise Lokman's soul to be patient as long as it takes till justice prevails and his visions are fulfilled.

You are missed. Rest in power my friend.

Women, Peace and Security Transitional justice and reconciliation Human rights
Disclaimer: The views expressed in this article are those of the author and do not represent the views or position of Peace Direct.