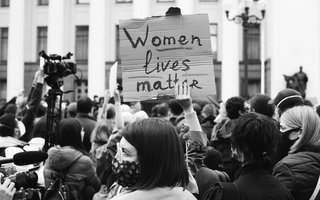 In Ukraine, there are many civil society organisations that implement peacebuilding initiatives. But there is no data on how many CSOs are led by women or have initiatives for women. For example, the Ukrainian organization “Women for peace” is led by women. They support conflict-affected communities in the east of Ukraine through providing humanitarian aid, leading peaceful protests, and organising an annual conference – the Kyiv Global Summit called “Women. Peace. Security”. Despite some movements, a lack of funding and economic opportunities, as well as some traditional social norms, remain the main barriers to women’s participation in peacebuilding.

In my latest assignment for Peace Insight, I spoke to five women about their views on peace, the role of women in peacebuilding, the skills needed for peacebuilding, and the challenges they face. They shared the need to empower women economically, as well as to develop women’s leadership and participation in community decision-making. Ultimately, these efforts lead to reconciliation, peaceful cohesion between Internally Displaced People (IDPs) and host communities, and the resilience of conflict-affected communities.

In my latest assignment for Peace Insight, I spoke to five women about their views on peace, the role of women in peacebuilding, the skills needed for peacebuilding, and the challenges they face
Ignoring women’s voices is a warning sign for conflict

Watch the interview with Kateryna here.

I wish more projects would be created for IDP women and local communities to connect, integrate, share experiences and support each other

One thing I took from my conversations was that peacebuilding donors and funders should support initiatives that ensure gender equality in conflict and post conflict recovery. Political space should be created for the greater participation of women in peacekeeping and peacebuilding. Globally, billions of dollars are invested in projects where only men are involved. Most women-led organisations operate with limited funding. According to the ex-Executive Director of UN Women, Phumzile Mlambo-Ngcuka: “Investment in supporting women’s leadership is the best investment in peacebuilding”. On this, I couldn’t agree more.

Culture, media and advocacy Women, Peace and Security
Disclaimer: The views expressed in this article are those of the author and do not represent the views or position of Peace Direct.