ABOUT WAYA: War Affected Youth Association (WAYA) is a  registered Youth trans-formative Organization  with REG. No. CDR/114 working in the Archdiocese of Gulu to support victims of war, orphans and vulnerable children (OVC) in the community affected by war, disease, or disaster to recover from the past experience through peaceful and an inclusive approach. WAYA  works to protect, educate, advocate for and promote the realization of their rights in  conflict and post conflict communities. 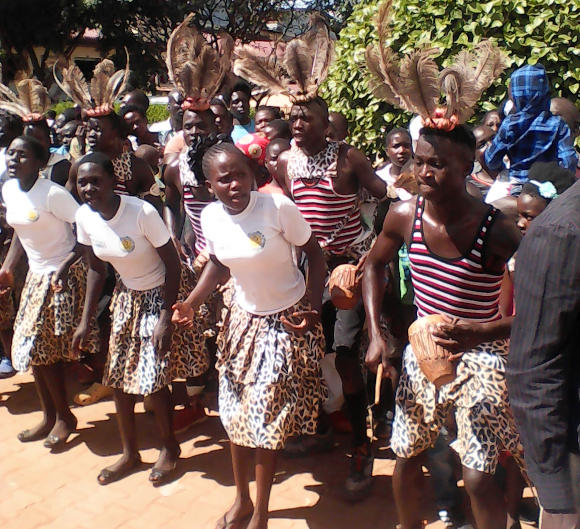 WAYA was founded by a group of young people directly affected by the Lord Resistance Army (LRA) atrocities in 2005 spear headed by an abducted student/Seminarian to provide Life Skills and psycho-social support and trauma healing mechanism to children and youth so as to support and help them develop and grow to a responsible and God fearing adults.

WAYA Mission: to restore hope and transform lives of vulnerable young people and their families through transfer of skills and knowledge, technology and opportunities to young people for self-reliance and creative capacity buildings as an effective mechanism for positive social transformations in Northern Uganda.

WAYA Goal: Improve the living condition of young people in the community by rebuilding their livelihoods and promotion of their rights in the post war context.

WAYA theory of change: WAYA believes that lasting solution to the plight of the affected person requires his/her direct participation, empowerment and involvement of the local populations in the community affected by the conflict/crisis or disaster.

Former abductees of the Lord’s Resistance Army face stigmatization and discrimination in the community they live. They are often rejected in the villages/home they return  to. War Affected Youth Association (WAYA) was founded by formerly abducted youths to support these formerly abducted children, youth, children born in captivities and their mothers, former child soldiers . It campaigns against child abuse and the stigmatization of returning LRA child soldiers and those born in captivity. WAYA was established in 2005 to support children of war and orphans Its activities encourage active participation of children and adults in addressing issues affecting the lives of children and adult in the communities. It focuses on child protection, psycho social support, conflict prevention,  stopping child recruitment in to army forces, child abuse, stigma and discrimination of returning LRA child soldiers within Gulu District and northern Uganda at large. WAYA has reached out to over 10,000 people both directly and indirectly in the region. This has been done through Peace Clubs and peace-building activities in six “Night Commuter Centers" and communities around the district.

WAYA works in both schools and community has managed to resolve parent to child and teachers to pupils/students conflicts, separated children re-united with their families, enhanced child leadership, improved children's negotiation skills.

“Because of my active participation in the activities of WAYA, I was able to study freely in any school I went to. I never paid tuition fees and uniforms except scholastic materials because; I grow up in WAYA and WAYA trained me all this long and became Child delegate in many conferences. I was disciplined enough to learn all the skills I needed that is why I am a good trainer. The knowledge I acquired from WAYA gave me a job that is paying for my education. So I encourage you to be disciplined. Particpation is a right"

WAYA supported 105 former child soldiers in school and trained 155 youth (120 returnee young mothers in tailoring and 35 vulnerable youth in hair cutting and dressing) to earn income and followed up with formerly abducted children in their homes to provide psycho-social support.

Many WAYA activities conducted bridge the gap between the children and the adults in the community. Both children and adult were made to play their parts in peace building starting form the individual to the community and the nation at large.

“My mum did not tell me why she was giving me most of the domestic work to do; she was always in the market and could come home late when it is already late. She does not talk to me and I thought she hate me, above all work was a punishment to me. I feel home was not my place, I left home started living on the street but now I am aware of my roles and my parents roles” a 15 year old girl narrated her story.

A widow who refused her name to be disclosed said: “I lost my husband in 2000 and since then I have been managing my family alone. Some of children are not even saying thank you for supporting us mum, instead they demand for everything they desire on earth without minding the status of the family they come from. Most of them are influenced by their peers whose families have money. So because they want to be at the same level they create situation that make them stay away from home. Some of you are like that....”

This activities drew many children and other vulnerable group closer to the community. They form groups that participated the training, dialogues, games and sports of the WAYA Peace building activities. Some children returned to school while others got reunited with the family and many reported to the community for acceptance and reunification.

WAYA has trained peace clubs in peace building and conflict resolution to promote  truth, justice, forgiveness and reconciliation in the community.

in 2015, WAYA Implemented "Strengthening Community Peace Education" (SCOPE). SCOPE is a follow up project of Tomorrow’s Peace Builder implemented in 2014 with Peace Prize Award. The 2015 fund was used to follow up and supported Peace Clubs WAYA worked with them and this report covered the activities implemented with the fund provided by Peace Direct in November, 2015. The activities carried out included; follow up and monitoring, 1 Cultural Gala and 1 Family Peace Camp. During this time WAYA reached over 2000 people both young and old, men and women through our creative approach of art (Music Dance and Drama), recitation of poem and peace messages. This was not a new project but a continuation of Tomorrow Peace Builders Project. It supported follow up activity for the project implemented in 2015.

Today WAYA is implementing  “Peace Drum” is an art based activity that brings together young people with different talents and skills that are exploited to earn a better living. The activity aims at educating target groups on a variety of social issues- enhance and strengthen Peaceful coexistence in the community with funding locally raised through Art.