Afghanistan has long been used as a battleground for strategic wars by larger external powers. This is in part due to its geographic position between the Middle East, Central Asia and South Asia. In addition, the fragmented and polarised nature of Afghan society, which is made up of many different ethnic groups, has led to its multiple internal struggles which have gained support from the different external powers. The almost continuous devastation caused to the country for over three decades is testament to the strength and endurance of its people and the groups who work towards rebuilding their country.

In 1978 the Saur Revolution overthrew the existing government and implemented a Socialist agenda. Led by Hafizullah Amin and the military of the Khalq party, the agenda included a move to state atheism, introduced land reforms, and declared the equality of the sexes. Reigning President Mohammad Daoud Khan, along with 17 other members of his family, was overthrown and killed just hours after the start of the coup, while many members of the traditional elite, the religious establishment and the intelligentsia were also imprisoned, tortured or killed. The revolutionaries went on to free prominent figures of the Khalq party, and Noor Mohammad Taraki was chosen as leader and President. Following this, the Mujahedeen, loosely-aligned opposition forces made up of groups of mostly Pashtun tribesmen, began attacks aimed at overthrowing the Marxist-Leninist government, which was also under attack from other left-wing groups who opposed President Taraki. The ruling party in turn requested the support of the Soviet Union in fighting the Mujahedeen resistance, removing the other left-wing opposition, and supporting the failing Afghan army. There was a massive initial deployment of 100,000 Red Army troops into Afghanistan. The US saw this as a prime opportunity to weaken the Soviet Union as part of its Cold War strategy, and they began to provide training and arms to the Mujahedeen resistance groups, along with extra support from other countries such as Saudi Arabia and the UK.

Estimates of the financial and military assistance from these external powers ranged from $10 to $40 billion over the nine-year conflict. It officially ended in 1989 with the withdrawal of the Soviet forces. The devastation caused by the conflict left an estimated 2 million people dead and 1.5 million people disabled, in part due to the massive urban carpet-bombing campaigns and the large areas of land mines that still exist today. Two million people were internally displaced, and one third of the country's pre-war population fled into neighbouring Pakistan, Iran and further afield. image by US Army, published under the Creative Commons License

By 1992, the Communist government had collapsed and the Peshawar Accord declared Afghanistan to be the Islamic State of Afghanistan. However, many groups refused to acknowledge the new government and the country soon fell into a civil war that lasted throughout the 1990s. Working government departments, the police, justice systems and education systems did not have time to reform after the Soviet War and much of the country descended into lawlessness. This led to areas being controlled by different armed factions, who in turn were supported by governments and groups in Saudi Arabia, Iran, Pakistan and the US.

In the early 1990s in Kandahar, a militia group called the Taliban began to emerge as a political and religious force, which supposedly opposed the tyrannical rule of the local governor, and began to instil greater order in the area. Led by Mohammed Omar, it had the support of many Afghan refugees from Pakistan. The group gained increasing recognition, power, and support as it began to take control of much of southern and central Afghanistan.

Implementation of an Islamic state

The Taliban was able to oust the weakened incumbent government and take over Kabul in September 1996, establishing the Islamic Emirate of Afghanistan. Many of the Taliban’s leaders followed a fundamentalist version of Deobandi and Wahhabi Islam and a strict interpretation of Afghan social and cultural norms. They enforced the most extreme version of Sharia law ever encountered in the modern Islamic world. The Taliban became notorious internationally for its policies for women, which included requiring women to wear a burqa (a full face and body covering) and banning them from leaving the home without an accompanying male relative. Women were not permitted to work, or to be schooled, after the age of eight. In some areas of Afghanistan, many forms of entertainment, including dance and music, were banned. Those who disobeyed the laws enforced by the police, or those seen as political dissidents, were subjected to public beatings and executions. Many Pakistani nationals joined the Taliban to fight against the United Front’s forces while Osama bin Laden channeled more money in support, citing it as the only true Islamic state. Bin Laden had been involved in the Soviet War, providing money to different militia groups to fight the Soviet forces. He returned to Afghanistan in 1996 after having to flee Sudan and Saudi Arabia, and allegedly used the country as a base to plan and finance attacks internationally. image by Dfid, published under the Creative Commons License

At the same time the United Front, also known as the Northern Alliance, led by Ahmad Massoud, fought back against the Taliban. Western support and financial assistance in the 1990s had dramatically decreased after the end of the Cold War; however, with the increase in the number of attacks on US embassies internationally from Islamist terrorist groups, attention began to increase once again with the US attacking suspected bases belonging to bin Laden in Afghanistan in 1998, and the UN ordering increasing sanctions on the Taliban. In early 2001, Massoud appealed to the European Parliament for help and warned that there was information about a large-scale attack on US soil. However, he was killed by a suicide bomb attack on 9 September 2001, two days before the attacks on the Twin Towers that shook the world.

September 11th and the US War on Terror

In the aftermath of the World Trade Center attacks, the US government quickly identified Osama bin Laden as responsible and claimed that the Taliban was harbouring him and refusing to hand him over. They launched a series of aerial attacks on alleged al-Qaida bases under Taliban control and began militarily and financially supporting the Northern Alliance to bring down the Taliban. The Taliban government in Kabul collapsed in December 2001, with many of the Taliban forces moving to the south and along the contested border with Pakistan.

Hamid Karzai was installed as President of the interim government in 2001, whilst other coalition forces joined the US and UK to fight against insurgency attacks in Afghanistan; with namely France, Germany and Italy supplying the most troops. In 2004, the first Presidential elections were held, with Karzai winning 53 per cent of the vote, albeit with an extremely low turnout amid fears of electoral violence. However, since 2006, there has been an increase in the levels of insurgency led by the Taliban who used mainly improvised explosives and suicide bomb attacks leading a UN report to suggest that most of the civilian casualties in Afghanistan are the result of Taliban attacks. With approximately 154,000 troops currently stationed there, the coalition military occupation is now in its tenth year. In 2010 alone, an estimated 10,000 people were killed. image by US Army, published under the Creative Commons License

At the end of 2010, the Obama administration pushed towards a final troop surge with an extra 30,000 US troops. The US has given a date of July 2011 for when they want to start withdrawing troops from Afghanistan, with the aim of shifting control to Afghan security forces by 2014. However, training of the forces and police has proved extremely difficult due to a large number of suicide bomb attacks at recruitment centres, a drop-out rate of 25 per cent and a high level of drug addiction amongst troops.

Afghanistan is struggling to rebuild itself amidst the ongoing war despite the billions of dollars of aid that have been pumped into the country. Life expectancy is 44 years, compared to an average of 53 years for other low-income countries worldwide. The government is failing to extend its control or enter into negotiations with the Taliban, while the Taliban in turn refuse to enter into any negotiations until all foreign troops leave the country. Many of the Taliban and their leaders are based across the border in Pakistan where British and US troops cannot be seen to be overtly attacking nor occupying, although they have made frequent use of 'drone' attacks which are carried out by unmanned aerial vehicles (UAVs). The opium trade has increased massively since 2001 and the occupying forces are unable to prevent it, with some of the proceeds allegedly going to members of the Karzai government. Other forms of corruption remain rife in all sectors of society and some areas remain outside of government control. image by Defense Images, published under the Creative Commons License.

In July 2010, Wikileaks released a huge cache of 90,000 secret military files related to Afghanistan. Revealing how the coalition forces had killed hundreds of civilians in unreported incidents, it also recorded the surge in Taliban attacks and the fear of support to the Taliban from neighbouring Iran and Pakistan.

Throughout spring 2011, the Taliban launched a major offense, targeting government officials and buildings. The attacks took place in Kandahar with the Taliban claiming control over the city.

There is no immediate end in sight to the Afghanistan conflict, and its complex issues and lack of stable governance mean that new conflicts will continue to rise. However, there is a small but steady increase in the number of groups working towards building civil society on a local level and mediating conflicts. The stance on development in Afghanistan is shifting slightly, with more awareness being given to locally-led projects as opposed to donor-led projects. After more than three decades of conflict, the fatigue of war felt by its people is strong, along with a yearning for a chance of a more tolerable situation in a country where several generations have only known war. 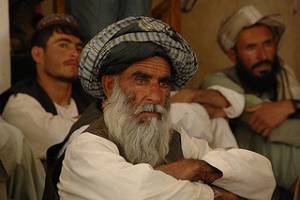