Since its period of colonial rule (1908-1960), DR Congo has repeatedly suffered conflict. Post-independence, under President Mobutu, entrenched corruption through the 1970s and 80s caused  the country to splinter into ‘city’ states, some with no formal justice system. Mobutu’s ‘divide-and-rule’ strategy provoked ethnic violence, especially in Kivu provinces in 1993.

In 1996, Rwanda’s post-genocide government invaded DR Congo in pursuit of Hutu génocidaires and potential revolutionaries, who enjoyed Mobutu’s sympathy and entered the country alongside Rwandan refugees. Uganda and Rwanda formed the AFDL, which ousted Mobutu and installed Laurent-Désiré Kabila as President in 1997. Despite their former alliance, Rwanda (supporting the RCD) later attempted to oust him too, kick-starting the Second Congolese War in 1998. Involving 11 African states, the conflict split the country into 4 zones of control. The government’s proxy militias made conflict deadliest in the east.

A peace accord was signed in 2002 and the first democratic elections brought Joseph Kabila to power in 2006. However, despite international efforts, violence and human rights abuses have increased post-transition, perpetrated by the government, neighbouring countries, and self-proclaimed community militia.

In 2015, President Kabila extended his constitutionally-sanctioned term in office prompting severe unrest. An agreement signed in December 2016, required elections be held in 2017. However earlier, in August 2016, the leader of the eponymous Kamwina Nsapu militia was killed by the police.  The following erruption of violence in Kasai province left 3,000 dead and 1.4 million displaced.  Citing continuing violence and abuse in Kasai, the UN has warned of the potential for ethnic cleansing. The insurgency now demands Kabila’s removal in line with the 2016 agreement. However, recent back-tracking leaves little hope for peace. 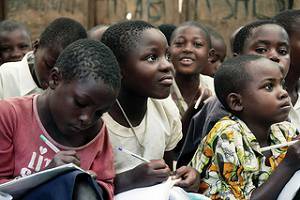