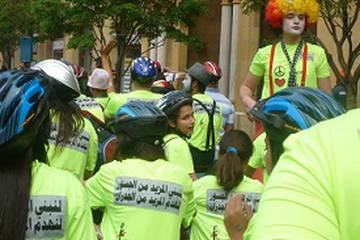 Fighters for Peace (FFP) is the only organisation in Lebanon uniting former combatants of the civil war from different political, religious and social backgrounds. It was formally established in 2014 to promote peacebuilding and dialogue among Lebanese communities. Unlike others who are still willing to fight in the many small scale conflicts erupting in Lebanon, these former combatants work to 'recruit' others from parties not represented in the group, helping young Lebanese avoid the path of taking up arms. All of these former combatants have undergone a deep process of inner struggle, followed by reflected and transformation, leading to the conclusion that violence, and ultimately war, results only in personal loss and destruction. They underwent a long path of reflected, re-elaboration of life and re-gaining a new identity, from fighters in war to fighters for peace.

Every now and again, these ex-combatants, men and women, share their personal experiences with each other. They are always astonished to re-discover that even though they belonged to rival parties, each and every one of them experienced fear, indoctrination, hatred, dehumanization of others, then trauma and introspection that led to change. Some take a long time to change, but for others it happened all of a sudden. Some became active in NGOs, others  pursued their PhDs in Philosophy and Peace Studies or are involved in political activities.

FFP have two psychotherapists in their team. The former combatants take part in workshops in the framework of 'biography work'. This is a method mainly practiced in Germany, Austria and Switzerland. It is not psychotherapy, yet it allows individuals and groups to explore their biographies. It is intended to support people who have suffered ruptures in their lives.

Fighters for Peace took part in the Lebanese uprising of October 17th, 2019, warning of the dangers of a new war, holding discussions with youth angry with the sectarian system  and looking into the past for a better future. The former combatants involved in FFP became agents of change and peacebuilding, reaching out to other stakeholders of society such as filmmakers, activists, educators and journalists. Fighters for Peace involves ex-combatants from all major Lebanese political parties and religious groups and becomes a 'new family' to those who left their militias. Everyone dreams of expanding this family by winning over the hearts and minds of fellow ex-combatants to engage them in reconciliation and transitional justice efforts. more reaching out to youth and students