X
The Sierra Leone section has been archived. This organisation profile is no longer actively maintained and may not be accurate. 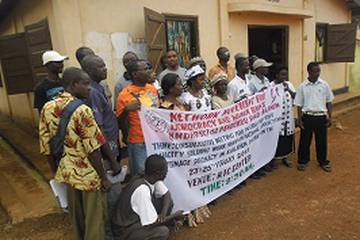 Network Movement for Democracy and Human Rights (NMDHR) is a non-governmental organisation working for human rights in Sierra Leone. Its vision is to promote human rights and democratic values. It was established in 2002, working initially in Freetown and Kailahun in the Eastern provinces. It has slowly extended its operation into the neighbouring chiefdoms and then to a number of other districts in the same provinces as a result of indiscriminate violations and bad governance.

The purpose of the organisation is to alleviate the indiscriminate violation of human rights so as to assist in promoting the government's recovery process and enhancement of peaceful co-existence among its people. In the last decade, NMDHR has cooperated with both national and international NGOs, political parties and the Ministry of Social Gender and Children's Affairs (MSWGCA) as well as supporting communities and traditional authorities addressing thematic issues in governance and human rights. Network Movement for Democracy and Human Rights seeks to promote human rights and good governance through advocacy, lobbying and campaigns to change the mindset of the people and increase participation in governance so that development and peace can take place.

The development and maintenance of a dedicated and participatory workspace can accomplish the NMDHR's mission. The involvement of network and donor partners at all levels in matters that relate to their needs is essential. The promotion of cooperation and teamwork among network partners is crucial, and it is important to recognize and respect the dignity of the individual in accordance with Article 1 of the Universal Declaration of Human Rights. The organisation demonstrates the following core values: respect for gender, accountability and transparency, inclusiveness, tolerance, professionalism, commitment, collaboration and truthfulness.