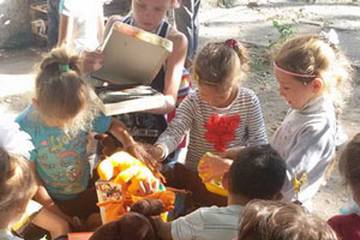 Country of Free People is a public organization working to facilitate the engagement and integration of people’s initiatives at different levels to improve Ukrainian society and build a peaceful environment. It was founded on 26 September 2014 in Kramatorsk (Donetsk region). The main activities of the organization take place in two Ukrainian cities: Kramatorsk and Lviv.

In Lviv, the main goal is to provide peacebuilding events aiming to integrate the Ukrainian society and rehabilitate the people affected by the conflict. The main target groups are children and families of IDPs and ATO fighters. Distribution of food in the buffer zone. Image credit: CFP