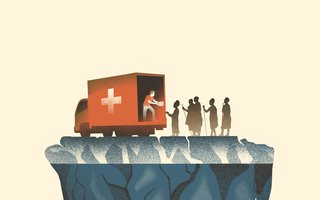 The offices enable INGOs to extend their reach and impact globally, while providing accountability to donors and an audit trail of financial flows and effort from the “global north” to the “global south”.

But country offices are also often one of the most visible and entrenched manifestations of structural racism in the humanitarian, development and peacebuilding system.

These offices enable INGOs to extend and maintain control of much of the “value chain”. This starts with donor funds being awarded to the INGO HQs located in wealthy countries and ends with the (typically white, western) humanitarian worker “in the field” directing activities. Such control is often framed as being a necessary part of the accountability of large complex organisations to their donors.

However, the maintenance of country offices also reinforces power imbalances between INGOs and local partner organisations. INGOs are entrenching western notions of “low capacity” in the host country, while cementing existing relationships between western donors and western-educated mostly white senior staff. This model has proven remarkably resistant to change.

Country offices have been known to open and close at short notice as a result of changes in INGO strategies or shortfalls in INGO funding. Some INGO country offices operate like a neo-colonialist outpost, staffed by white western expatriates, dominating the funding for development, humanitarian and peacebuilding work. Some implement programmes directly, with little local input, thereby competing with – and displacing – local organisations.

Even the most well-intentioned country offices, for example, those that only fund and support local organisations, unwittingly reinforce structurally racist norms. This includes participating in INGO-dominated (and sometimes INGO-exclusive) coordination mechanisms, and becoming part of a close knit and exclusive expatriate network, where who you know can be the key to securing the next grant. This is often more important than the integrity and local rootedness of the work. Peace Direct is also looking at how we have benefitted from such a system.

Even the most well-intentioned country offices, for example, those that only fund and support local organisations, unwittingly reinforce structurally racist norms

How do we decolonise development?

Since the Grand Bargain, there have been signs that some INGOs are starting to shift their model/s so that they fund more local entities and even transition out of their role as overseas offices. But there is also a risk that “localisation” could be spun to mean simply hiring more local staff or having more local staff in senior positions, including on the board of country offices.

In a recent interview in The New Humanitarian, Janez Lenarčič, head of the EU Humanitarian Office (ECHO), said confidently that “a large number of our humanitarian partners – especially the NGOs, international NGOs – do have local branches, so there is no issue with localisation”. This waters down localisation to whether an organisation is registered in-country. If this is how donors are thinking of localisation, perhaps we should abandon the word altogether.

We need to talk about INGO country offices. We need to dispel the myth that they are simply a neutral part of the bureaucracy of aid, or – worse – that they are a demonstration of a commitment to “localisation”. Until we talk about power, who holds it and how it can be claimed by those we purport to serve, the sector is not going to change. Country offices must be part of that change agenda.

We need to talk about INGO country offices

Our new report, ‘Time to Decolonise Aid’, shares our recommendations on how to decolonise development and tackle structural racism in the aid system. The report is the product of a consultation with 158 activists, decision-makers, academics, journalists and practitioners from across the globe.

Development Research Governance Sustainability
Disclaimer: The views expressed in this article are those of the author and do not represent the views or position of Peace Direct.