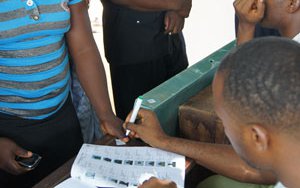 A woman votes in the 2011 Nigerian elections. Image credit: The Commonwealth
Insecurity, unlimited to ethno-religious factors, is mounting and concerns will persist about government’s inability to deliver a peaceful environment and ensure human security.
With Nigeria’s vast ethnic and religious diversity, creating “national unity” in Nigeria is a challenge, especially between its “Muslim north” and “Christian south”. The country‘s major political issues have strong regional implications, especially the activities of Boko Haram. With the 2015 national elections, political activities are in full swing, and grassroots pressures are growing in the far north, including from extremist groups like Boko Haram and Ansaru and also different agitations from the different parts of the country. As the debate on the eligibility of President Goodluck Jonathan to contest the 2015 presidential election continues to heat up the polity, two northern leaders (Aliyu Babaginda and Buhari) have warned that crisis might emerge of huge proportions capable of breaking up the country if President Jonathan continues on his campaign to be re - elected in 2015.

The 2015 Presidential election is approaching, but Nigeria is at war with itself. Insecurity, unlimited to ethno-religious factors, is mounting and concerns will persist about government’s inability to deliver a peaceful environment and ensure human security. The fact is that the prevailing violence presents an operational hurdle for peacebuilding which also could undermine Nigeria’s growth and development. As the deteriorating security situation continues, concerns will persist about the government’s ability to deliver a climate that would make some regions less dangerous before the 2015 Presidential election gathers steam. The rising tide of domestic extremism, kidnapping and militancy are a threat to the nation. The factual assertion is that the prevailing violence will hinder large public rallies during campaign due to security concerns. The country’s leaders need to take stock of the conflict resolution mechanisms in place to deal with the political divide between north and south, Muslim and Christian, and to prevent electoral violence in 2015. Additionally, perceptions of fair play, regional balance and power share will all determine future national stability.

Identity politics have been utilised in differentiating ethno-religious groups. In Nigeria, religion provides a basis for identity and commitment; conflicts exist between communities in a bid to promote their religious or cultural values. A person can only be voted for, if he is a Muslim or Christian, Igbo, Hausa or Yoruba. It is no longer a quest of who is the best candidate but which tribe or religion one is attached to. There have been multiple reasons attributed to these clashes but predominantly religious and ethnic intolerance.

Religious identity is another commonly defined form of recognition. In Nigeria it is grouped under Islam, Christian and Traditional. These religious groups often clash mostly between the Christians and Muslims. The resultant effect of these sectarian clashes, is the emergence of ethnic militant and religious groups notably, Boko Haram. According to Reynal (2002), "there are two basic reasons why religious differences can generate more violence than other social cleavages. Exclusively of religion, you can speak multiple languages but you can have only one religion". It is an identity marker that forms the major differences in social relationship and people's concept of the world. Religion transcends national boundaries, hence Al-Qaeda's link with Boko Haram of Nigeria. In religion there is usually the concept of an "us versus them" which most religious fundamentalist tend to use.

The recent exploits of Boko Haram and the kidnapping of over 200 school girls has drawn the attention of United States and other international communities to Nigeria. Human security is called into question with these entire crises because the citizens are left vulnerable. Conflicts has led to mutual distrust, that threatens the security of the country, the people, property, environment and has led to the high rate of emigration within and outside the country. The state has the responsibility to safeguard its citizen's lives, property, human rights etc. and should employ policies that will clamp down on any form of perceived threat against its citizens. Nigeria being a focal point in West Africa should not downplay the consequences of these conflicts, hence the need to face the challenges squarely by implementing policies geared towards conflict management.

The country‘s political dynamics also affects sustainable development and growth. Political instability and civil unrest tend to take their toll on economic growth and cause severe human rights abuse. At present, the political system still struggles with state coherence, improving government institutional efficiency, internal security, democratic representation and attitudes, enforcement of the rule of law and economic reforms. The country’s rather uncertain overall political situation underscores the assessment that Nigeria’s transformation is far from over. Nigeria is a society intensely divided due to the institutional efficiency of the government system, the country’s pattern of democratic representation and attitudes toward the rule of law are still weak leaving.

Structural constraints should not be neglected in any analysis of Nigeria; the way forward is to develop a special model for conflict resolution solely for Nigeria. Policies should be geared towards strengthening democracy, human rights development, the market economy, infrastructure development, provision of employment, conflict management and prevention on the local level, particularly in the country’s hotspot areas, to ensure long lasting calm and to further stabilize the still fragile, three-tier federal system.

Conflict prevention and early warning Transitional justice and reconciliation
Disclaimer: The views expressed in this article are those of the author and do not represent the views or position of Peace Direct. 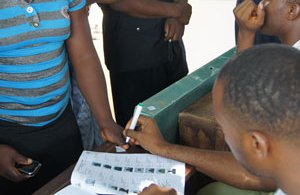