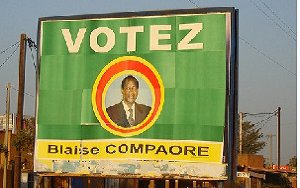 [more_info_box] Today, we launch a new section on Insight on Conflict: Burkina Faso. The country has seen serious political upheaval this year, and we are pleased to be able to respond so quickly to events there. Burkina Faso has suffered from many violent changes in government over the years, and its people have suffered as a result. However, as in other parts of West Africa, civil society has gone from strength to strength. As our new Local Correspondent Boris Somé discusses below, Burkina Faso has a vibrant and active civil society, with many organisations doing superb work to bring people together around the country. Boris has literally published the book on peacebuilding in Burkina Faso, and we are delighted to add his knowledge and experience to our team.

As Boris notes in his article below, it is not just people but organisations that must work together to put an end to Burkina's history of coups and unrest. The current situation is a rare opportunity for meaningful change - taking advantage of it might mean securing the fair and just future often hoped for but never delivered in Burkina Faso. Blaise Campaoré rule for 27 years in Burkina Faso, before being forced to resign in 2014. Image credit: Jonathan Dueck

The trouble in Burkina Faso, at heart, relates to one thing : Article 37 of the Constitution. Repeatedly amended by Blaise Compaoré – the president of Burkina Faso during the last 27 years – his last attempt to modify the constitution would have allowed him to stay in power for a fifth five-year term, despite the fact that Article 37 says the President can be re-elected only once. The current Burkinabe crisis is therefore artificial, in a sense. He created the problem, by remaining in power for so long. And he could also have solved it, simply by saying that he would not be a candidate in the 2015 elections.

In the event, by refusing to leave through the front door, Campaoré couldn’t even find a window, and fled through the bush. His departure was hastened both by the mass public demonstrations in Burkina Faso, but also by the huge display of solidarity from civil society actors. Opposition political parties, women’s groups, religious and traditional leaders, young people – all of these people are hungry for change, and they came together as one to force Campoaré to leave.

The determination of Burkinabe civil society helped the people of Burkina Faso to demonstrate that they are capable of dealing with their own problems.
In this situation, Burkinabe civil society played a decisive role. It showed its determination and its maturity in giving a voice to the voiceless, representing the under-represented and marginalised in the country. Obviously, some organisations were more visible than others. M21, the Anti-Referendum Collective (CAR), Citizen’s Broom, the That’s Enough Movement, the Citizen’s Resistance Front – all these groups made themselves heard. As for WANEP-Burkina – my organisation – we launched ourselves into a programme of direct advocacy, most recently holding talks with Mogho Naba, the Supreme Chief of the Mossi people, on the 29 October. This, the eve of what will from now on be an unforgettable day in Burkinabe history, saw the beginning of protests which saw hundreds of thousands of people take to the streets, ultimately leading to Campaoré’s resignation on the 31st of that month.

Invigorated by their own strength, they took responsibility for removing the man from power who has ruled over them for 30 years, and who many thought it would be impossible to remove without severe violence. Burkina’s collective consciousness is no longer prepared to allow dictatorship to continue – hardly compatible with the notion of a republic – but the predicted chaos has not taken place. And this is a strong signal to the world: any potential dictator, and those who would abuse their power, must know that the people of Burkina Faso will protect their republic. A café in Ougadougou. Hundreds of thousands of Burkinabe took to the streets to protest against Campaoré’s rule in October 2014. Image credit: Phillippe Streicher

In fact, this is nothing new. The history of Burkina Faso shows that when civil society comes together, it has the power to make change. They have brought down regimes (such as that of Maurice Yaméogo, in 1966), extracted concessions, such as in the wake of the murder of the journalist Norbert Zongo in 1998, and forced the resignations of presidents, as was the case this year. Burkina’s lively, loud and committed civil society knows how to pick its moments, but will always fight for the people. The uprising this year was therefore the result of a certain maturity among these organisations.

There is nonetheless a certain disorder appearing in the aftermath, which has long simmered in Burkinabe society. Violence must be rejected. The appointment of the National Transitional Council has been a fraught process and not without controversy. This transitional period must therefore be a period of serious reflection for Burkinabe civil society. It must examine events critically but without prejudice, remaining cohesive and vigilant if it is to ensure its continued credibility as a representative and negotiator. It is a delicate balancing act.

The transition could be a historic moment for Burkina Faso to develop a fair settlement for all. Civil society must make it so
The constitution needs to be addressed, and not tailored as a straitjacket for society, like in 1991. Civil society must be vigilant in order not to allow the transitional government to become merely a vehicle for personal gain.  It must push for the creation of a durable, peaceful and equitable future.

In order to do this, it needs to lobby in particular for ECOWAS and the AU to help inaugurate mandatory term limits in Burkina Faso. Prohibiting coups d’état is one thing, but doing so protects presidents, while term limits would protect the people over whom they rule. This would be far better than seeing presidents protected by amnesty laws which do nothing but reward bad governance.

Such a result will only come about in Burkina Faso if civil society makes its voice heard above the noise. It is in this context that I join Peace Direct as Insight on Conflict’s Burkina Faso correspondent. I am delighted to do so at a time of such optimism, and am already seeking out information on the work of local peacebuilding groups around the country. I am looking forward to help publicise them, and to providing an insight not just on conflict in Burkina, but on the peaceful solutions we are trying to create on the ground.