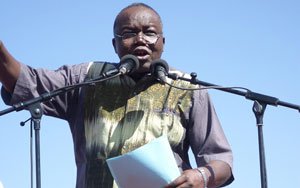 The RSP: a hangover from Compaoré, and a power struggle at the heart of government

The RSP is lurking in the shadows of Burkina's transitional government
There is still a smell of former President Blaise Compaoré in Burkina Faso. And it comes from the Régiment de Sécurité Présidentielle (RSP, Compaoré's personal guard). Even mentioning the RSP brings to mind the crimes committed in Burkina Faso under Compaoré's regime, such as the murders of David Ouedraogo and Norbert Zongo.

The influence of Campaoré continues, with the RSP lurking in the shadows of Burkina’s transitional government. Indeed, it appears that the transitional government is actually under surveillance by the RSP, which remains a significant source of power. Disturbing signs abound: a weekly ministerial meeting was prevented from taking place in early February by some former members of the RSP. This came after a previous meeting was interrupted in December by similar elements, demanding that Prime Minister Yacouba Zida not dissolve the RSP altogether.

The Burkinabé political landscape has become more and more troubled in recent times, and the transition will not succeed if it has to develop within an RSP empire. Is Campaoré preparing his revenge, and does he want to do it by proxy?

A bad start in need of a good ending: the future of the transitional government

The establishment of the transitional government took place in an exceedingly strange manner. The RSP actually took centre stage in managing it. In the immediate aftermath of events last year, Zida – a Colonel and previously second in command at the RSP – suprised everyone and took the side of the people, becoming prime minister of the interm government charged with organising elections in 2015.

Perhaps Zida is a wolf in sheep’s clothing. But the current discontent at the heart of the RSP shows that Zida has decided to rule in accordance with the transitional charter. He gives the impression of wanting to remove the influence of the RSP and be a true leader of the people. This gives him some credibility among Burkinabé, who must now mobilise to save a republic in dire straits. The actions of the RSP resemble preparations for a coup, and the people must stop this from happening. The transition is potentially in the hands of the army. But Burkinabé society has its own soldiers, who will work tirelessly to prevent a return to the past: the men and women of civil society. And let there be no doubt about the necessity of their work. The transition will not bear fruit if it has to develop within the RSP empire. The RSP is powerful and well-equipped, and the events of last year will amount to nothing if Burkina’s people do not keep their guard up. They intend to do so. Days after the events of the 4 February – and 100 days after the departure of Compaoré – a mass demonstration took place in Ouagadougou, protesting against the continuing influence of the RSP. The message was clear: Compaoré has left, and so must his supporters.

The people no longer want to smell Compaoré's legacy. And for last October’s revolution not merely to be an interruption of business as usual, all Burkinabé – young, old, men, women, political parties and civil society groups – have to continue their mobilisation. Martine Yabre
We sent Blaise Compaoré to the rubbish heap. But the RSP still stinks
Many are involved, and they are taking the opportunity with both hands. As women’s representative Martine Yabre said at the demonstration: “It is out of the question for women to be at home when men are mobilising for change. Women must be involved in building and safeguarding the future of our country.”

Young Burkinabé will be crucial to progress. Herve Ouattara, of the Collectif Anti-Referendum (CAR, the Anti-Referendum Collective), urged Burkina's youth to “sleep with one eye open. The battles of yesterday and today will be nothing compared with those of tomorrow, if the RSP is not dismantled.”

Dr Ra-Sablga Seydou Ouedraogo, from the FREE Afrik Institute, added that “We sent Blaise Compaoré to the rubbish heap. But the RSP still stinks.”

For Dr Ouedraogo, prosecutors should open a file on Compaoré. The difficulties in demilitarising power in Burkina will be great, he said, and society must be vigilant. "The RSP is a threat to and puts the Republic in danger. Dissolution without RSP conditions."

Professor Luis Marius Ibriga – a founding member of the Front de Résistance Citoyenne (FRC, Citizen’s Resistance Front) invoked the transitional charter in reminding people of the popular legitimacy of events last year. He said it was the people who chased out Compaoré, and not the RSP, and that power belonged to them. The RSP must not dictate the law, he added.

Let us hope that there is a dictatorship of good sense
One representative of the Citizen’s Broom movement – a well-known civil society group in Burkina – said that the will of the people cannot be fought. “Better one committed battalion than an army of sheep.” Nonetheless, others are worried. "What scares me most are politicians,” said Samskey Lejah at the protest. “They must not turn young people against one another. They have to avoid all talk of violence, before, during and after the elections.”

For their part, several political parties also attended the protest, signalling their support for the dissolution of the RSP. A spokesperson for the Front Progressiste Sankariste (FPS, the Progressive Sankarist Front), said that doing so would be in line with promises made as far back as 1999. Sixteen years later, it continues to prosper. Should the RSP be dissolved, as civil society wants, or reconstituted into a more useful organisation? The future of the RSP

Burkinabé should not expect miracles from the transition. But they are entitled to expect progress after the transition. The revolution is not a football match which begins and then ends. It is a long process. But due care should be taken. The threat of violence remains real. And there must be a way to rebuild the RSP into a more useful organisation. It would be a mistake if, drunk on the revolution, Burkinabé confused well-trained and well-intentioned elite members of society with Compaoré’s RSP. A cool analysis and clear vision will allow for a peaceful Burkina, and to take some good from the RSP, despite its dark past. There is a risk of a dictatorship of opinion in Burkina Faso; let us hope that there is instead a dictatorship of good sense. We demand the pure and simple dissolution of the RSP as from this day."