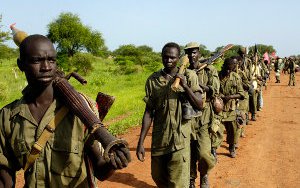 Image credit: United Nations Photo
The situation is about so much more than simply ‘ethnic violence’ ... [it is] the product of a particular form of politics, history, ideology and most importantly leadership.
News reports and Twitter feeds are as we speak providing the global audience an ongoing feed of the devastating violence that has been playing out in South Sudan in the last week. At the time of writing, the BBC and Al Jazeerah have reported that at least 500 people have been killed in violent clashes between factions of the army and civilian supporters of the President Salva Kiir, and former Vice President Riek Machar.

Kiir has claimed that Machar was attempting a coup in order to capture power, though Machar is presently in hiding and so it impossible to confirm or deny such allegations. The UN and other groups are voicing fears that the fighting could escalate into another civil war. However, as is characteristic of such news outlets, we are told little of the historical context, the motives and the actors themselves that shape such events, whilst news articles are almost universally littered with the commonly recycled adjectives of ‘chaos’ and ‘ethnic violence’. Twitter users, confined to 140 characters per post, give us even less.

In April of this year I travelled to South Sudan to carry out field research for my Master’s dissertation. I arrived in the capital Juba having limited background knowledge or attachment to the country, but rapidly developed an intense intellectual fascination and personal compulsion towards the plight of Africa’s youngest country and its people. The account that follows intends not to be a comprehensive nor authoritative overview of the events in South Sudan of the past week, but simply the thoughts and observations of myself and a few of the people whom I met in Juba, in an attempt to provide some colour and context to the body counts and simplistic labels.

The formation of the SPLA/M

The SPLA required two things to ensure continued unity and popular support: a hero and an enemy. The hero was Garang himself and the enemy was the North.
In September 1983, President Nimieri of Sudan introduced legislation to extend the jurisdiction of Islamic sharia law throughout the country. John Garang, a young Dinka officer, reacted by forming the Sudan People’s Liberation Army (SPLA/M) that same year, fighting for secular reform and to preserve the unity of Sudan, initiating what became Africa’s longest running civil war.

According to the historian John Young, Garang’s rule had a ‘bloody character’, as he killed or imprisoned fellow Southerners who did not share his precise goals, whilst failing to articulate a clear political vision for the future of the movement. In the absence of a consistent political ideology, the SPLA required two things to ensure continued unity and popular support: a hero and an enemy. The hero was Garang himself and the enemy was the North.

Things began to unravel critically in 1991, when three SPLA commanders, Riek Machar, Lam Akol and Gordon Kong – the self-proclaimed ‘Nasir-faction’ – produced a pamphlet criticising Garang for his abusive leadership, introducing the rhetoric of human rights and advocating self-determination, ergo separatism, for Southern Sudan. Machar was a Nuer tribesman, and in September of 1991 led a revolt against Garang and his Bor Dinka community, with the assistance of Lam Akol and an army of Nuer civilians. The revolt escalated into a bloody massacre in which an estimated 2,000 people were killed, which has since become known as the Bor Massacre. Machar and his allies were militarily defeated by Garang and forced to defect from the SPLA, though the cleavage between the Dinka and the Nuer lived on.

From 1994 onwards we see the development of the SPLA’s political wing, the SPLM, and the increasing use of the rhetoric of democracy and human rights. However, evidence suggests that this ideological commitment was merely an attempt to invite international patronage as opposed to an authentic shared vision. John Young and other historians have argued that ‘a military ethos always dominated’, as Garang resisted institutionalisation and continued to neglect the development of a unifying vision for the future of the movement, beyond the securing of power itself. During these years, Garang’s popularity within the movement waned. Riek Machar, having reportedly spent several years working for the Sudan government in Khartoum, returned to the SPLA/M in 2002, working below Garang’s deputy and fellow Dinka, Salva Kiir.

In 2005 the Comprehensive Peace Agreement (CPA) was signed by the Sudanese government in Khartoum and the SPLA/M, outlining a six interim period, in which Southern Sudan would develop its own governmental infrastructure. This remarkable act signalled the end of the 22 year-long civil war between the North and the South. In 2011, a referendum was to be held, allowing the Southern population to vote on whether to remain part of Sudan, or to secede.

Just months after the CPA was signed though, Garang was killed in a helicopter crash. Despite becoming increasingly unpopular within the ranks of the SPLA/M, for Southern Sudanese he remains a hero to this day. The SPLA/M deputy Salva Kiir automatically became the president of the interim government and Riek Machar the vice president. Six years later, the referendum was indeed held and an overwhelming majority voted to secede. South Sudan became a sovereign state on the 9th of July 2011.

From this brief genealogy of the SPLM, several key strategies of power become visible from the time of war: Machiavellian self interest among its leaders; a notable lack of unifying ideology, matched with a willingness to parrot the rhetoric of foreign powers; intense factionalism; ethnic instrumentalism; and highly personalised leadership. Most notably, almost complete impunity for the abuse of human rights and a disregard for the security of civilians.

We cannot talk of the SPLM and the run-up to the events of the past week in Juba without discussing the two key actors, President Salva Kiir and Vice President Riek Machar. Writing in 2008, John Young depicted Salva Kiir as being ‘a modest, soft-spoken man’, who ‘is not autocratic, decisive or – at least to date – a power monger’. Echoing this sentiment, during my own research a journalist in Juba told me: ‘I always think of Salva as being a rather weak individual who is largely manipulated by his entourage’. A policy adviser to the government suggested that ‘maybe he didn’t expect to be in that role…he sort of found himself in it and possibly feels uncomfortable’.

By contrast, Riek Machar was described almost invariably using the same handful of epithets by my interviewees and the wider media: ‘charismatic’, ‘ambitious’, ‘engaging’, ‘divisive’, ‘controversial’ and a ‘political genius’. Deborah Scroggins, a journalist and biographer of Machar’s career once surmised that ‘he feels your pain even as he plots your end’.

The major international news outlets have frequently cited an incident in July, in which Kiir dramatically fired Machar and the rest of the cabinet from their positions in government as marking the beginning of the chain of events that have culminated in the violence ongoing in the country today. However, I would point to another event, a few months earlier, as being an equally noteworthy catalyst.

One of the key focuses of my dissertation research in April was the Truth and Reconciliation Commission (TRC) for South Sudan that Riek Machar had recently decided to champion. In January 2013 Machar made a public speech at a conference in Delhi, in which he apologised for the 1991 Bor Massacre and stressed the need for national reconciliation in South Sudan, particularly between the Nuer and the Dinka. He said: ‘I led a faction, Doctor John [Garang] led a faction and the conflict was so intense that innocent people died in the process…I offer my apology to people who were affected’. Shortly afterwards he took charge of developing a TRC, purportedly modelled on the practices and values of the famous South African TRC. At the beginning of my research visit to Juba, the TRC was still in its embryonic stages and the final structure of the Commission was as yet unknown.

The need for reconciliation in some form is indeed felt keenly by many in South Sudan. However, from the outset Machar’s close involvement with the TRC produced whispers of underlying political motives, linked to rumours that he was hoping to run for chairmanship of the SPLM in 2015. Somebody suggested to me that, as with his public apology, ‘he wants to clear the image of that people have of him, that will give him a better chance to run’. Another said to me that he believed Machar’s involvement in the TRC ‘appeared a sham again, to strengthen his position politically’.

It seems that they were not the only ones to think this, as on April the 15th, I arrived outside Machar’s office in the government ministry complex for a meeting that I had scheduled with him, only to be barred entry from the building and told to leave immediately. It transpired that that very morning, Salva Kiir had abruptly issued a public presidential decree that stripped Machar of several of his vice-presidential powers and barred him from further participation in the Commission.

Responses to this turn of events reflected a common sentiment, which was that the president felt threatened by Machar’s potential bid for presidency and his use of the Commission as a tool to facilitate this. Many people feared that this event would immediately precipitate fighting between the President and his ex-Vice, spreading to each camp’s supporters, but it did not. Relations between the two men over the intervening weeks and months have been conducted cordially within the public eye, though many have been certain that a simmering conflict would eventually surface.

Three months later, when Kiir sacked Machar and several others from their government positions, the same theories that Kiir feared that Machar would attempt to steal his power were heard once more, though publicly Kiir stated that the shock move was simply a ‘reshuffle’ and a natural part of the democratic process.

From this brief window into the historical chain of events that preceded South Sudan’s most recent period of violent conflict it becomes highly evident that the situation is about so much more than simply ‘ethnic violence’. I would argue that it is equally, if not more, the product of a particular form of politics, history, ideology and most importantly leadership.

Sudan South Sudan
Disclaimer: The views expressed in this article are those of the author and do not represent the views or position of Peace Direct.