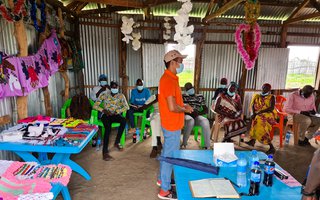 “I would like to go back to people asking me questions. They missed asking me if I am happy because I think that is what matters most. I am happy with what I am doing. I am waking up every day not only to make my dream a reality but to also contribute to making peace a reality”

These are the words of Nohman Khalil, a young Maranao, one of the 13 Islamised tribes of the island of Mindanao in the Philippines. Nohman has devoted most of his adult life to peace. He is an inspiration to his local community, and to other peacebuilders in Mindanao and around the world who have crossed his path.

His peacebuilding journey began in January 2012, when Nohman was selected to be part of a volunteering programme run by local Filipino organisation Kapamagogopa Incorporated (KI). The main purpose of KI’s volunteer program is to give young Muslims from Mindanao the opportunity to become peacebuilders and development workers by joining non-Muslim organisations. As one of our 145 alumni, Nohman seized the chance with both hands and joined the 7th Batch of Peacebuilding Volunteers.

At that time, the current peace agreement in the Philippines was more of a dream, and sporadic violent conflicts remained part of daily life in Mindanao. After his training, he was the first KI volunteer to be placed with an International NGO working in Mindanao; Forum ZFD (Civil Peace Service), a German NGO developing methods and tools for dealing with violent conflict. When I spoke to Nohman, he reflected on his experience as a volunteer:

“When I applied as a volunteer, there was only one thing in my mind, to serve the people without expecting anything in return but fulfilment, because that's how I understand the word “volunteerism”, doing something without expecting anything in return. But with KI, it feels different, being a KI volunteer is a lot more different. It's not just about serving the people, it’s not just about working voluntarily, but it's being a model, it's showing who you are, what you are and your culture in general. It's promoting your own culture and changing the expectations of other towards your culture, and even your religion.

I was placed in an International Non-Government Organization based in Davao City. I was the only Maranao and Muslim in the office. It was also my first time to stay in a big city and a Christian dominated area. When KI brought me to Davao in my placement, I felt a bit of pressure carrying not only KI’s name but my culture and belief in general. On the other hand, KI equipped me properly before sending me to my placement organisation which gave me courage not to give up.

My volunteering experience allowed me to grow personally and professionally. I was able to use my profession as a teacher to its fullest, especially that my project was about “integrating peace education in teacher’s education in Davao region” and I'm so proud to have contributed to the Peace Education Teacher Manual that was published in 2013 and is now being utilised in all Teacher Education Institutions in Davao region.”

After his successful year of volunteering, he was asked to remain as a staff member at Forum ZFD. During this time, Nohman had his first involvement with the Mindanao Peacebuilding Institute (MPI). Over time, Nohman participated in some of its courses, and would later work as a classroom assistant. MPI has had a major influence on him and to mark MPI’s 20th Anniversary in 2020, Nohman shared the following:

“I would like to recognize its contribution to my entire journey in peacebuilding work from 2012 until today. The knowledge and skills I have on conflict transformation, conflict resolution, bottom-up transformation, culture and identity, nonviolence, trauma healing, and even facilitation, which I am doing in my work now, and applying them with a civilian protection lens, are all from MPI. They have been strengthened through application and experience.

"The knowledge and skills I have on conflict transformation, conflict resolution, bottom-up transformation, culture and identity, nonviolence, trauma healing, and even facilitation, which I am doing in my work now, and applying them with a civilian protection lens, are all from MPI."

Through the knowledge I gained from different courses in MPI, I have designed trainings on community participatory conflict analysis, conflict prevention and conflict transformation, mediation and dialogue, social cohesion, and other related topics. I am now sharing these with grassroots community leaders in South Sudan”

In 2014, Nohman became the Peace Community Coordinator at the Institute of Peace and Development in Mindanao (IPDM) at Mindanao State University in Iligan City. He had the role as the Local Peace Adviser working alongside an International Peace Adviser from GIZ Civil Peace Service. He worked mainly on the activities related to the Peace Process, ensuring that different stakeholders including Government entities in Lanao del sur, Lanao del Norte, and Iligan City understood the process.

One of the most important activities which Nohman was instrumental in delivering was in reaching different communities, especially in Lanao del Norte. He conducted listening sessions which became vital contributions to the recommendations for The Transitional Justice and Reconciliation Commission (TJRC) in the Philippines. These communities had borne the brunt of attacks from rebel groups fighting for independence. Nohman recalls his experience;

“I think in the beginning, especially in Iligan and some areas in Lanao del Norte, it was a huge challenge being a Maranao myself. I remember one time when we conducted listening session on TJRC in Kauswagan, due to the emotion and anger, I was glad my name didn’t sound Maranao and I didn’t introduce myself as Muslim.”

After three successful years at IPDM, Nohman moved on to Nonviolent Peaceforce (NP) working as a national civilian peacekeeper in the Lanao areas. He mainly focused on an Early Warning and Early Response (EWER) program there. He supported and strengthened community-based structures by providing them with different capacity building trainings. However, after a few months, in May 2017, the relatively peaceful situation in Lanao was shaken badly with the siege of Marawi by an ISIS-influenced local terrorist group. This event affected his family, friends and his whole community, as he told me:

“My role didn’t necessarily change during the Marawi siege, but I was directly involved in IDP protection related activities, for example, ensuring that vulnerable sectors received necessary services. It was very difficult. My mental health was greatly affected during those times especially during the first month of the siege where the roads were blocked and I was stuck in Iligan. There was no way to see my family. I was doing protection related work and I had to ensure that my mental health was protected too.”

Nohman continued in that role until 2019 when he got the chance to continue working with NP to apply his skills and experience in another conflict setting, South Sudan. 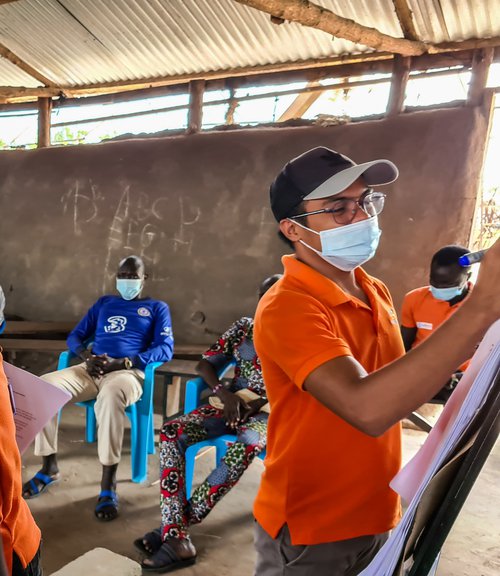 Photo: Nohman in his peacebuilding role with Nonviolent Peaceforce in South Sudan.

“Before coming to South Sudan, I did my research. I read about how the people of South Sudan suffered from ethnic violence; the civil war in 2013 and another breakout of violence in 2016; famine in 2017, which they described as a man-made catastrophe caused by civil war and economic collapse; and much more negative news. People may think I am crazy for still pursuing my decision after all those horror stories. But honestly, that is the reason why I am here now. I came here for a reason and with purpose.

"There was no way to see my family. I was doing protection related work and I had to ensure that my mental health was protected too"

I came prepared; equipped with my peace work experience in Mindanao; fuelled with inspiration and eagerness to learn more approaches that are beyond what I have tried and tested in the Mindanao context. In my current position as Team Leader in one of NP's field offices in South Sudan, my work is mainly related to general protection, child protection and GBV prevention. In the context I am in, I also get involved in local peace processes, especially in providing capacity building on conflict resolution to community leaders, women, and youth.

Now, nearly two years since I came to South Sudan, what is keeping me here? What is motivating me to stay even longer? Hope. It is the hope from the naked eyes of children telling me, “please stay.” It is the joy from the voices of every woman singing on the street telling me, “there’s hope.” It is the sincerity from the elders saying “we are tired of war.” It is the pain of every internally displaced person I met crying “we want peace.” I have hope that peace will be achieved.”

We at KI will continue to follow Nohman’s journey, as we do with all our alumni, and continue to be enthralled by his achievements.

"There was no way to see my family. I was doing protection related work and I had to ensure that my mental health was protected too"
Mark Boot Mark Boot has worked as an advisor, trainer and fundraiser for local organisation KI in the Philippines since 2008.
Read more from Mark Boot