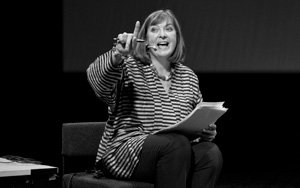 We are delighted to announce that the BBC broadcaster Bridget Kendall has joined the panel of judges for our global competition, Tomorrow’s Peacebuilders. Regular host of Radio 4’s ideas programme The Forum, Bridget made her name reporting on the break-up of the Soviet Union and the wars in Chechnya and Afghanistan. In 1992 she was the first woman to win the highly prized James Cameron Award for journalism, and in 2001 she interviewed President Putin live from the Kremlin.

Bridget will be helping to judge our new competition which aims to find the best emerging local peacebuilders. Four winning organisations will receive an award of $4,000 each plus an invitation to the prize-winners’ event in London in November. Entries are still open, with a deadline of July 21 for applications. The winners will be announced on Armistice Day, 11 November 2014. To enter go to /tomorrows-peacebuilders

The competition launched in 2013, when it received 244 entries from 54 countries. The winners worked on issues including child soldiers and the Lord’s Resistance Army in Uganda, narco-wars in Colombia, and Muslim-Christian prejudice in the Philippines.