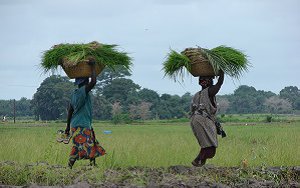 The people of Casamance have lived in fear of a revival of conflict for many years. Image credit: Tomás Serna

The armed struggle in Casamance was ignited in March 1982 by the violent and counter-productive repression of a peaceful demonstration of women by the Senegalese authorities. Women were attacked, elders were injured and holy shrines were targeted. In local cultures, especially in the Diola culture, neither women nor children must be harmed. The subsequent violent reaction initiated the oldest of the ongoing conflicts in West Africa.

Casamance: caught between war and peace

The conflict in Casamance has sentenced its population to neither war nor peace
After three decades of alternating between war and latent violence, thousands of people have died in Casamance. On top of this, tens of thousands of people have been displaced, the local economy has collapsed and considerable territories have become uninhabitable, occupied by separatist guerillas or by planted mines. This never-ending conflict in Casamance remains latent or 'low intensity' - sentencing the population to a setting that is neither peace nor war. Jean Claude Marut sums it up: "The Movement of Democratic Forces of Casamance (MFDC) has lost the war, but Senegal has yet to win the peace."

Indeed, the Senegalese army is omnipresent. It provides security on the main roads of Senegal, and weapons are increasingly rare, even within the border areas occupied by separatists; only a few 'highway robbers' threaten an almost general calm. There is not a state of war as such. So best can we describe the situation of non-peace in Casamance?

Non-peace: 'see nothing, hear nothing, say nothing'

The current political setting in Senegal seems to be conducive to negotiations
For many years, the people of Casamance have lived in anxiety, with fears of reprisals and corrections by the authorities or combatants. The maxim of the three wise monkeys prevails: Good may come to your family if you "see nothing, hear nothing, say nothing".

So far, witnesses of atrocities by both sides prefer to have seen nothing, heard nothing and said nothing. They do not listen to the conflict and they do not pronounce their discontent. The hard years of the past and these series of violent events remain latent, in individual and collective memories. At present, Senegal - an emerging and competitive state on the African scene - is not contemplating regret or reconciliation, truth or justice. At least not yet. For now, the issue does not arise in public debate.

At the European Conference on African Studies ECAS held at the University of Paris in July 2015, a panel was questioned about levers for peace in Casamance. All speakers underlined the lack of public debate on the issues of peace and conflict in Senegal. Indeed, the work of a young journalist, "Tales of a forgotten conflict" - published in June this year - is unavailable in Senegal. The authors of books on the Casamance conflict are also hesitant, as if they too are playing the three monkeys of wisdom.

In the absence of a public debate, Casamance remains isolated from the rest of Senegal. This isolation is not just geographical. The misunderstanding of the social and cultural characteristics of Casamance and its mismanagement in Senegal is accountable for the length of the conflict and probably also of the failure of various attempted peace initiatives. Discrete negotiation efforts have all failed. In the absence of a sub-regional facilitator, all existing initiatives for dialogue with the separatists have struggled to be endorsed. But the current political setting in Senegal seems to be the most conducive yet for engaging in negotiations.

Civil society has the ability to fuel a peaceful, free and democratic public debate
Civil society in Casamance is well organised, prepared and competent. It might offer a more nuanced and contextualised understanding of the armed groups and their expectations. It could contribute to the peace process as a facilitator of dialogue and negotiation, as is the case in other conflicts. But the peacebuilding agenda and the strong financial support received from international partners have jeopardised the capacity of these organisations to stand as carriers of neutral initiatives. This support has been a major obstacle to preserve the confidence of the separatists.

Hence civil society peacebuilders have difficulties in contributing to the transformation of this long armed conflict. Nonetheless they may have the ability to fuel a necessary public debate: a peaceful, free and democratic one, respectful of all opinions. However to speak freely about the conflict in Casamance still remains complicated and even risky. Comments are quickly deformed, intentions get damaged, misinterpretations are the rule, and slander and defamation multiply in the realm of rumour. "As soon as you speak openly it looks like you fall into the crocodile's den", says my journalist friend. For now, the Caimans of war and non-peace continue to define the setting in Casamance.

Senegal
Disclaimer: The views expressed in this article are those of the author and do not represent the views or position of Peace Direct.