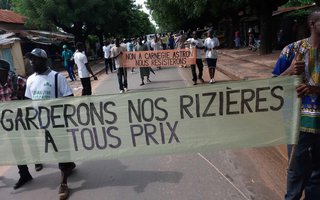 On August 24th, 2017 the Senegalese army entered the small coastal village of Niafourang, close to the Gambian border, with a light armoured vehicle. They escorted a technical mission of Astron Carnegie, a Chinese/Australian mineral mining company. Residents demonstrated their opposition to the project and demanded they leave. “Its over, the accalmia is over” lamented Ousmane Sane, one of the leaders of the local union against the exploitation of the zircon.

In Casamance, Senegal, the fragmented Mouvement des Forces Democratiques de Casamance (MFDC) has fought the Senegalese army since 1982. In spite of the peace talks held no real progress have been made in the past 35 years. Both positions remain unmovable, the state underlines that the national sovereignty is non-negotiable, the MFDC denounces structural looting and exploitation and claims a right to independence. Ambushes, skirmishes and landmines remain a continuous threat to regional stability.

An unofficial ceasefire ensures a fragile setting of neither peace nor war that some call "armed peace "and popularly is known as the accalmie. The accalmie is made possible the expansion of state economic initiatives, like the construction of rural roads, and allowed international development activities to take place. The accalmie entails a disturbing permanent military presence and the perpetuation of red zones that are not under the full control of the state.

Since MFDC leaders consider this zircon mining project a provocation, the accalmie is now threatened.

The sand mining site in Niafourang is a small stretch of sand some 5-7 km long and 100-200m wide. At the east of the dune there are rice fields, plantations and houses. To the west are river arms with forest of mangroves opening to the Atlantic ocean.

The interest is huge for the state. The mining sector generates new financial resources and helps to reduce deficits. Astron Senegal has shown its commitment to managing its activities in compliance with economic, social and environmental regulations. Its social program provides for $USD 20,000 a month to cover the needs of the affected villages and a sustainable development program including the creation of more than 3,500 jobs.

But there are concerns about the risks the mining project raises. The site of Niafrang is located in a very rich ecosystem. The environmental impact of the sand exploitation has not been carefully assessed, claims the local union against the exploitation of the zircon.

The union questions the impact on water pollution by the machines, and the risk that water pumping can lower the level of the water table, accelerating the entry of salt. They also worry about the impact on the mangrove forest and impact on the rice fields, and a such, their own livelihoods. Several academic papers highlight these risks.

Indeed, in an open letter for President Macky Sall a group of researchers claimed: "carried out on behalf of the concessionaire company, the only existing impact study unfortunately offers no satisfactory guarantees of impartiality". Their call for an independent environmental study was not considered, so now the group demand action to protect the dune : "in the face of climate emergency, now is not the time to increase the vulnerability of natural environment. Rather, the area needs prevention and adaptation”.

An emergent African democracy ready to face a fragmented maquis…

The failure or inability to definitely resolve the Casamancese conflict is considered the Achilles heel of stable democratic Senegal, an emergent democracy increasingly considered on the international arena as a last republican stronghold to contain the "jihadist pressure" in West Africa.

Inded Senegal has long-standing experience in participating in peacekeeping operations led by the United Nations, the African Union, and the Economic Community of West African States. Senegal provides 2,820 military experts, troops and police to UN Peacekeeping putting the country in the top ten UN contributors.

In January 2017 Senegal assumed the leadership of the ECOWAS Operation “Restore Democracy” in the Gambia contributing to facilitate the exit of dictator Yayah Jameh and the setting of a peaceful transition. Its mandate has been recently extended due to the security situation in the Foni, the border region with Casamance.

With the Senegalese army presence in the Gambia the MFDC positions along the Gambian border are now de-facto surrounded. For the first time MFDC has its enemy to the north, in the Gambia.

With regard to the Niafourang mining project MFDC did not hesitate to warn “who would undertake to associate himself with this theft” in a communicate on July 20, and “disclaimed on any responsibility for the serious consequences that may ensue”. Simultaneously MFDC envoys cautioned the local population to leave if the mining works begin.

… And a misinformed civil society willing to prevent the conflict ladder

In Niafourang, the local union against the exploitation of the zircon stresses the need to quickly conduct a dispute against the state operating licence, and how to avoid association with the MFDC. Some civil society specialised organisations have contacted the union to offer support, like Advocates for Community Alternatives and the Forum Civil, the Senegalese section of Transparency International.

“I do not give credit to the sincerity of Astron, the echoes we have from other mining projects make us suspicious about the promises and the commitment of these multinationals” states Ousmane Sane, from the local union against the exploitation in Niafourang.

The Coordination of Civil Society Organisations for Peace in Casamance (COSPAC), launched two "info-meetings" in Ziguinchor aimed at giving voice to both supporters and opponents of the project.

Peaceful demonstrations against zircon exploitation were held on 10 September in the regional capital. The Casamancese diaspora manifested as well through the press and demonstrations in Barcelona, Montreal and Paris.

If nothing is done to stop them, the backhoes will begin gutting the Niafrang sand dune in search of zircon from October 2017 onward. A number of local families are already considering leaving the place. The accalmie is already over for them.