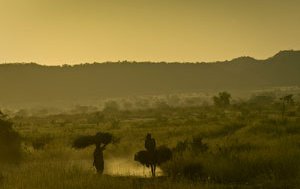 For 25 years, Idriss Deby, the President of Chad, has held onto power through an authoritarian regime based on fear and repression. While in the past he was criticised by western countries, today he benefits from their support and from the status of a regional leader thanks to his role in the fight against terrorism in the Sahel and the Lake Chad basin.

However Chad’s regional influence hides poor governance and economic fragilities. Civil society has tried to denounce these weaknesses but the politicisation of the Chad’s north/south divide has prevented it from speaking with one voice.

A key military player, vehicle of stability in the region

Despite a long history of instability, international actors have come to consider Chad as essential to safeguarding their geopolitical interests in the region. Idriss Deby has quickly understood how to take advantage of his diplomatic relationships with different partners.

Deby has positioned Chad as a cornerstone of counterterrorism in the region. The country plays a pivotal role in the fight against Boko Haram. Indeed, the headquarters of the multi-national force are located in N’Djamena, Chad’s capital, and Chad has deployed about 5,000 soldiers on the Chadian, Nigerien and Cameroonian borders. Chad is also serving as a base for the recent US support to Nigeria in combating Boko Haram. In Mali, Chad intervened alongside the French army and France chose N’Djamena as its operational command centre.

Deby is therefore considered as a vehicle of stability in the region, and the capability of his military is well thought of by the western diplomats. Nevertheless, the question of Chad’s stability should not take in to account only military strength but also include political, economic and social issues.

Military successes obscure economic weakness, exacerbated by the fall of oil prices, and a police state. With a €630 million projected annual budget deficit for 2015, it is difficult for the state to pay its civil servants on time. Unemployment is high and economic development very limited.

The fight against Boko Haram has strengthened Deby’s control and helped silence the opposition and civil society. Because of the potential risk of Boko Haram infiltration in the country, the government has beefed up its security measures. Protests are severely suppressed. People are arrested and tortured, and human rights are violated almost every day. Thus, the ways to express political dissent are limited for the opponents. Many of them have been frightened since the mysterious disappearance of opposition leader Ibni Oumar Mahamat Saleh in 2008.

Deby gives the impression of political openness because he defends press and freedom of expression and the authorised multiparty system. He has also opened governmental positions to southern people. But in reality, powerful positions remain occupied by his own tribesmen and his family. Nepotism, resource monopolisation and repression are the guiding principles of his regime which is ranked 154/174 on Transparency Internationa's Corruption Perception Index in 2014.

Communitarian divides: an obstacle to the national cohesion

While Deby has benefited from a positive image on the international scene, Chad's internal political situation has been denounced by civil society. In the 1990s, most Chadian civil society organisations were from the South. For decades they have denounced tribalism within the civil service, corruption and impunity. But these systematic accusations have prevented dialogue with the state, which sees CSOs as allies of the political opposition.

Moreover, the regime has also attempted to divide the main components of the civil society: either by offering powerful positions to their leaders, or by supporting the emergence of an alternative civil society which defends the position of the government. The recurrent allegations of partiality and self-interested motives have made the relationship between the civil society and the government difficult and have revived the antagonism between the southern people, who are mainly Christian, and the northern people, who are mainly Muslim. Indeed, many in the north see CSOs as a political instrument used by southerners in order to reclaim power.

Thus, several Islamic organisations have invested in areas such as education, health, and charity, in order to offer an alternative to the Christian CSOs and 'western civilisation' (see: Gondeu Ladiba, “L'émergence des organisations islamiques au Tchad : enjeux, acteurs et territoires”, Al Mouna, January 2012). The fact that such actions included a proselytising dimension and cooperation with government also reinforce the perception of a 'Christian' front with a complex identity. While some are really involved in communitarian actions, others use Christianity as a flag for their 'southern' statements and their 'resistance' to Islam. In rural areas, divisions are related to conflicts over control of resources between Muslim pastoralists and Christian farmers. Politicisation of the north/south divide and communitarian reflexes have therefore made it difficult for Chadians to agree on a common cause of action.

Young people in Chad: a cause for optimism?

Young people in Chad who didn’t experience the civil war and Hissein Habré’s regime are less affected by the political and economic divides. Since 2000, several youth-led CSOs have fostered values of citizenship and solidarity among young people.

There is also the “Young artisans for a new citizenship in Chad” project launched by REPPACT in 2010 which groups more than 150 associations in Chad through training on citizenship and inter-association dialogue (especially with Muslim associations), and supports members’ micro projects. In 2012, French Cooperation funded the project with €100,000.

Furthermore, recent student protests show that young people have a significant capacity to mobilisse. Even if those initiatives are at an early stage, they testify to a willingness of young people to fight for citizenship values, beyond the socio-cultural antagonisms.

Beyond being a regional military hegemon, Chad is a precarious political regime. The population suffers from poverty and poor governance. CSOs can play an important role in the development of the country but they lack national representativeness and legitimacy. In order to reinforce their capacity, young people in Chad have understood it is necessary to stop communitarian divides. Their local peacebuilding initiatives constitute a first step toward a national reconciliation process and the opening of political dialogue.