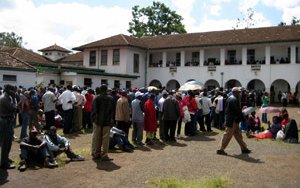 Kenya experiences consistently high levels of violence targeting men and women. Its history is littered with state-sanctioned violence and widespread, systematic and grave human rights abuses committed in colonial times and by every Kenyan administration since. Ordinary citizens frequently resort to violence as a dispute ‘resolution’ mechanism. Inter-communal clashes and killings, forced evictions and displacements, mob lynching, killings of and by the security forces, and inter-familial revenge killings and suicides are commonly reported. Election-related violence often occurs in the run-up to, during and after voting, most infamously in 2007-8 when 1,133 people were reported killed and more than 600,000 displaced in the violence which followed a general election.

A sub-set of this violence is the pervasive sexual gender-based violence, which can spike during political conflict. During the 2007-8 violence, many people, of both sexes and all ages, were raped. Attackers included members of the police as well as gangs, neighbours, relatives and ‘friends’. Police officers committed more than one quarter of recorded rapes, according to Human Rights Watch. None of these cases has been prosecuted, officially due to a lack of evidence.

In peaceful times, almost one in five women who have been married has experienced sexual violence from an intimate partner. 12 per cent of women aged 15-49 were raped the first time they had sex. In Nyanza, where rates of sexual violence are highest in the country, almost one third of women have experienced sexual violence. Nairobi Women’s Hospital treats about 2,500 cases of sexual violence (the majority of whom are women and girls) per year. About three-quarters of these cases are from Nairobi alone. A significant percentage are attacked by multiple assailants in a phenomenon that is little understood and receives no official attention.

Contributing factors include a widespread tolerance of sexual violence, the absence of a legal framework on intimate-partner violence, a criminal justice system that is largely inaccessible, a lack of political will to prosecute cases, and a police force that treats many survivors with contempt.

In a move to change this situation, a number of significant public interest cases have been taken up recently by Kenyan civil society groups. The remarkably progressive 2010 Constitution, which contains an expansive bill of rights, affords every Kenyan the right to institute court proceedings relating to a contravention of the Constitution, among other radical changes to the previous dispensation.

In February 2013, a joint case was filed by a range of groups, including eight survivors of sexual violence, the Coalition on Violence Against Women, the Kenya section of the International Commission of Jurists, and Physicians for Human Rights, against various branches of the Kenyan government. These included the Inspector General of Police, Attorney General, Director of Public Prosecutions, Independent Policing Oversight Authority and two ministers.

The constitutional petition documents a variety of crimes targeting both women, including cases of rape, defilement, forced pregnancy, and deliberate transmission of HIV, and men, including sodomy, forced circumcision and mutilation or forced amputation of penises. It notes that survivors frequently did not report them because they feared that nothing would be done, or that the police would protect state representatives involved. The petition accuses the state of failing to anticipate and prepare a lawful policing response to civil unrest, to investigate and prosecute the perpetrators, and to provide effective remedies to the survivors of sexual violence in violation of a host of constitutional rights.

An earlier constitutional petition in 2011 had accused the government and state officials in Kenya of being of being directly or indirectly responsible due to acts or omission for the murder, injury and rape of internally displaced people who had fled the violence and were living in camps. Both cases are ongoing.

In 2013, the High Court of Kenya ruled that the police “unlawfully, inexcusably and unjustifiably, omitted and/or otherwise failed to conduct prompt, effective, proper and professional investigations” into the defilement of 160 girls in Meru County, creating a “climate of impunity”. This constitutional petition involved the Federation of Women Lawyers Kenya and the Kenya National Commission on Human Rights. Promisingly, the court ordered the police to conduct proper investigations into each case, to respect human rights standards and to train their staff accordingly. It is unclear, however, whether any action has been taken by the police in this regard.

Conviction rates for sexual assault or defilement of minors are currently estimated at 15-20 per cent. This rises to 80-90 per cent when organisations such as the International Justice Mission assist in the prosecution of cases. Part of the problem is that many police prosecutors have no formal legal training. It is encouraging that the Office of the Director of Public Prosecutions is aware of this and taking action to remedy the situation. 100 independent, trained prosecutors have already been hired and starting from November 2014 another 450 will be hired, towards an eventual minimum of 900. This will significantly alter the system by improving trial advocacy, and eventually helping the state to work through the unmanageable backlog of more than 650,000 cases pending in the Kenyan courts as of February 2014.

For the time being, individual cases still take years to complete, and require a hefty financial and time investment. It is no wonder that most Kenyans do not pursue formal justice for themselves and their children. What parent would put their child through court proceedings lasting three to five years, with only a 20 per cent chance of success? Police investigations continue to be bungled, hampered by an expectation of bribes, a lack of basic equipment and generally poor standards of professionalism.

Without an independent review of how the national police budget of $731 million is spent, it is impossible to ascertain why basic equipment needed for investigations, including gloves, cameras, phone credit and petrol, is routinely lacking. Poor women are routinely discriminated against. The most cynical police seek to make money from both the survivor (to pay for the service) and the accused (to ensure a bungled case).

Assessing impact: on the right path, but a long way to go

There are mixed opinions on the efficacy of pursuing public interest litigation in relation to sexual violence in Kenya. On the one hand, cases are seen positively as a symbolic gesture which allows survivors to tell their stories, and reminds the government of its obligations. They keep the issue alive by forcing attention on it, including on some of the seemingly organised rapes which took place in 2007-8 but have been ignored since.

And it is clear that public interest litigation is becoming increasingly important in Kenya, largely because of the expectation that the new 2010 Constitution has to mean a break with the past. Perhaps in the future these cases may lead to more accountability if the Independent Police Oversight Authority becomes active in investigating such cases.

But there is also an acknowledgement that they fall short in terms of providing a practical impact in the here and now.  Declaratory statements, even from the High Court, may be lauded by excited activists but do not actually make much of a difference to behaviour. This is due to a lack of goodwill on the part of the executive, combined with a profound disconnect between the legal system and practice on the ground. While acknowledging this, public interest cases remain one of the few avenues open to Kenyan activists as civil society space shrinks, and the government remains largely unresponsive to other kinds of pressure. 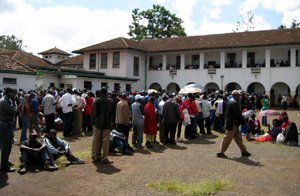