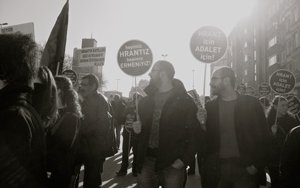 The Support to the Armenia-Turkey Normalisation Process has brought together eight civil society organizations – four Turkish, four Armenian – to work towards the normalisation of relations between Turkey and Armenia. Beginning in January 2014, the EU-funded project will run for 18 months. The civil society groups consortium seeks to establish harmonious relations by promoting people-to-people contact, economic and business links, and cultural and educational activities, while facilitating access to more balanced information in Armenia and Turkey.

A history of tension

Relations between the two nations have traditionally been complicated for a number of reasons, but one specific date is often associated with the roots of this tension: 24 April 1915. On this day, some 250 Armenian intellectuals in modern-day Istanbul were arrested at the order of the Young Turks, initiating the deportation and killings of Armenians in Istanbul and Anatolia. In addition to the Republic of Armenia, 21 countries currently recognise the tragic events of 1915 as the Armenian Genocide. Whether a nation chooses to recognise the Armenian Genocide or not is almost certain to affect its foreign relations.

The Armenian government and its powerful diaspora lobbies have sought to gain wider international recognition of the events as ‘genocide’. Turkey, on the other hand, says that deaths occurred on both sides, and that disease was also to blame for a large number of lost Armenian lives.

Frictions were further intensified in 1993, when Turkey closed its border with Armenia in reaction to Armenia’s conflict with Azerbaijan over Nagorno-Karabakh, the ethnic Armenian-majority enclave in Azerbaijan.

“The effect of the closed border has been to not allow memories to change,” said Salpi Ghazarian, director of the Civilitas Foundation, a non-profit think tank in Yerevan that is one of the eight organisations involved in the Support to Armenia-Turkey Normalisation Process.

This year, however, the Turkish Prime Minister Recep Tayyip Erdogan offered some surprisingly conciliatory words on the eve of the Armenian Genocide anniversary. In a statement released in nine languages, including Western and Eastern Armenian, Prime Minister Erdogan referred to the historic events as “our shared pain”.

I was in Yerevan, Armenia at that time for Armenian Genocide Remembrance Day and had the opportunity to find out the views of civil society leaders there.

“I think that having that statement out there is better than not having it. But this should not be the end of the road,” said Ms Ghazarian.

For the moment, the next step for reconciliation at the state-to-state level is unclear. However, the Turkish Prime Minister’s words do help to open the space for dialogue on Armenia-Turkey relations – a space that civil society is well positioned to further expand. “Civil society needs to keep hopes up by organizing regular events where more Turkish and Armenian young people can get together and know each other,” said Gürkan Özturan, a member of JEF-Turkey, a group that advocates for the enforcement of European values in Turkey.

Mr Özturan recently participated in such an event - the initial Yerevan-based part of the training course ‘Closed Borders, Open Minds’. Under the framework of the Support to the Armenia-Turkey Normalisation Process, the two-phase course connects Turkish and Armenian young adults to encourage them to advocate for and contribute to the Armenia-Turkey normalisation process in their communities.

Having never been east of Ankara before and knowing little about Armenia, an experience fairly common among Turks, Mr Özturan gladly attended. He says he was surprised by the similarity of cultures and the welcome he received.

Citizens and civil society are ready to rise above the closed border between Turkey and Armenia. Now, all they need is for the state to follow suit.
The Support to Armenia-Turkey Normalisation Process is using media, arts and culture to promote reconciliation as well. CivilNet, an online media channel run by the Civilitas Foundation, will provide greater coverage of the Turkey-Armenia issue. Eurasia Partnership Foundation and Anadolu Kultur, two other civil society groups involved, are hoping to create an architect training exchange related to restoration of Armenian historical sites.

Anadolu Kultur also organises the Armenia Turkey Cinema Platform in conjunction with the Golden Apricot Film Festival. The Platform will bring together filmmakers from Turkey, Armenia and the diaspora for trainings and project pitches this July. The winning project from last year’s festival is being shot in Turkey with post-production in Armenia, demonstrating the ability of one film to traverse a closed border.

The path to peaceful relations is still sure to encounter some thorns. At the march on the evening before the Genocide Remembrance Day in Yerevan this year, the Turkish flag was burnt. Some of the younger, feistier attendees were heard shouting slurs insulting Turks. Meanwhile, there is talk that Turkey will shoot a film as a counter-measure to Armenia’s expected genocide centennial event programme.

Still, many signs point to progress. Earlier this year, on the anniversary of the murder of prominent Turkish-Armenian journalist Hrant Dink, thousands filled the streets leading to Dink’s former office in Istanbul, calling for justice. Some shouted half-Turkish, half-Armenian slogans, while others chanted, “We are all Armenians”. Citizens and civil society are ready to rise above the closed border between Turkey and Armenia. Now, all they need is for the state to follow suit.

Mariah Pittman is an intern in the refugee advocacy and support program at Helsinki Citizens Assembly and recently attended the 2014 Summer School in Comparative Conflict Studies at the Faculty of Media and Communications, Singidunum University in Belgrade.
Read more from Mariah Pittman 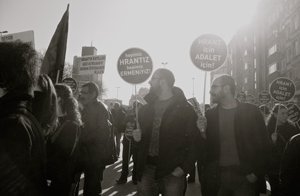