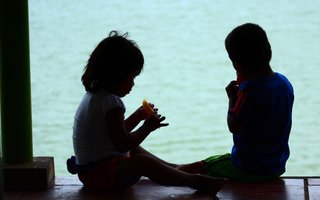 Earlier this year, the Commission for the Clarification of Truth, Coexistence and Non-Repetition launched its final report, Hay Futuro Si Hay Verdad (‘There Is a Future If There Is Truth’).

This report compiles the results of a 4-year of investigation “clarifying what happened during the internal armed conflict, promoting the recognition of responsibilities, as well as social dialogue and coexistence”. One chapter, “No Lesser Evil”, analyses the impact of the armed conflict on children and young people.

Using analysis of official data – which is scarce – and testimonies of victims, it characterises the consequences of violence for a population that the country has historically marginalised and violated.

Throughout the armed conflict, youth and children have experienced exclusion, misery and abandonment. They have become targets of violence. They have been exploited by armed groups. They have been victims of forced recruitment and sexual violence. And the state has not done enough to guarantee the full enjoyment of their rights.

As if this were not enough, under the logic of the ‘internal enemy’, minors and adolescents who have been recruited by illegal armed groups are then bombarded by military operations. And they are considered legitimate targets by the majority of the population, who, after so many years of dehumanising their compatriots, believe that categorising children as instruments of war makes perfect sense.

It is shocking to contrast the report findings with the important role played by young people in raising support for peacebuilding since 2016. Their social mobilisation was key to Colombia’s current change of power, with the arrival of a left-wing government. Amid dangerous and difficult contexts, youth leaders across Colombia have set out to be proponents of transformation.

Some have taken on the task of leading reconciliation processes or committed to change through political participation. Others have created safe spaces for diversity and inclusion, mobilised for the environment or for the recognition of sexual and reproductive rights.

It is these same leaders who have seen war head-on, and yet have become agents of transformation.

The stories of youth leaders, who work in community processes to help Colombia move from perpetual war towards dialogue and peaceful coexistence, are important and valuable. It is these same leaders who have seen war head-on, and yet have become agents of transformation.

Among many life stories, the Commission collected the testimony of Obet David, a 24-year-old youth leader from the department of Cesar. He has taken on the challenges of reconciliation and the fight against the stigmatisation of ex-combatants who are in the process of reincorporation. But also, as representative of the LGBTQI+ community in the Victims’ Roundtable in Manaure, he has championed inclusion and empowered diverse communities.

Metaphorically, Obet’s life is like a sea of strong waves. Each wave has brought change and his arrival has been sudden and unexpected. He is intrigued by the way life has led him to become a youth leader in Cesar, as he recalls that when he was younger and living in the city of Santa Marta, the reality of the country and the stories of violence were alien to him.

He had been a victim of forced displacement and violence after his brother was disappeared by the Revolutionary Armed Forces of Colombia (FARC) but, at that time, he may not have been interested in recognising himself as a victim of the conflict. That is, until the day he learned that his adoptive parents were signatories to the peace agreement: his father was deprived of his liberty and his mother was beginning her reincorporation process in the Territorial Space for Training and Reincorporation (ETCR) in Tierra Grata, Cesar.

“I have a leadership role, but my leadership is not fully accepted because my sexuality is not accepted”

After settling in the ETCR, Obet got involved in activities organised to promote the integration of ex-combatants into the community. But Obet has faced stigmatisation on two fronts. First, because of his closeness to the Tierra Grata reincorporation process. Second, within the ETCR itself, his identity and sexual orientation are incomprehensible to a conservative guerrilla group that previously carried out military trials and extrajudicial executions of LGBTQI+ people. “I have a leadership role, but my leadership is not fully accepted because my sexuality is not accepted,” he says.

Obet’s role as a youth leader in Manaure was consolidated through the Son de Paz project, which generated spaces for reconciliation and disseminated historical memory exercises. After becoming president of the Youth Platform of Manaure – a space for youth to effectively influence social policy – the political party COMUNES, created after the demobilisation of the FARC, commissioned him to lead the youth issue in the department of Cesar.

Obet has not only used political spaces to position his leadership, but also shares his life story; he has joined forces with other young people from other departments to give an example of reconciliation and transformation.

Like many young people of his generation, Obet knows that no-one can be a good leader working on their own. When asked about the role of youth in peacebuilding, he insists on the need to consolidate spaces to work collectively. This vision has led him to mobilise processes involving indigenous communities, youth leaders from various political sectors and student leaders to build the youth agenda for the department of Cesar.

For Obet, it is essential to train the region’s youth in leadership oriented more towards service and cooperation, and less towards individual vanity, as well as to understand that community work is not done to receive payment but out of the conviction to mobilise change.

The organised youth of Cesar know that the problems that most afflict the department are associated with the damage that extractive industries are causing to the environment. Therefore, they want to manage their own centre of Historical Memory to address society’s lack of knowledge about the armed conflict. And they want to empower youth through processes of political participation, giving them credibility to influence local politics.

Obet is certain that after the national strike of 2020 and 2021, the youth have a real opportunity to make the changes they want to see. They are called to lead the renewal, and committing to this means getting fully involved in peacebuilding.

In the last government, more than 300 ex-combatants linked to reincorporation processes were killed. In the department, the stigmatisation of the Tierra Grata community still hinders Obet’s work, as he sometimes cannot mention his closeness to the process or reach some areas without proper protection.

“It will always be the young people who are sent to war’s frontlines, that’s why we must support any peace dialogue”

Despite the emotional impact for a young person leading peacebuilding after being a victim of violence, Obet’s leadership is evident in his resilience and the critical and humane way that he understands what reconciliation means. In his life, he had to accept that his adoptive parents were part of the armed group that once victimised him; understanding their stories gave him the opportunity to forgive and live with those who hurt him.

He knows that the new government is more committed to peace, and this requires more work and organisation by the youth movement. He wants to support the government’s efforts to reach peace agreements with other illegal armed actors. And his reasons are irrefutable: “it will always be the young people who are sent to war’s frontlines, that’s why we must support any peace dialogue”.

Disarmament, demobilisation and reintegration (DDR) Children and youth
Disclaimer: The views expressed in this article are those of the author and do not represent the views or position of Peace Direct.

More on Disarmament, demobilisation and reintegration (DDR) and Children and youth →