Umayyad Mosque, before it was damaged during the Syrian Civil War. Image credit: Chris Hill

Currently in the Syrian war, attacks on communities are increasingly executed on the basis of their identity and according to UNESCO there is a ‘cultural cleansing’ going on in both Syria and Iraq. As a response to the current situation a number of civil society groups, nongovernmental organisations (NGOs) and international organisations are working to protect the country’s rich and diverse cultural heritage per se, but also because cultural heritage is recognised as a vital asset in a post-conflict peacebuilding process.

The challenge for external actors (such as for example ICOMOS, ‘Heritage for Peace’ and University of Pennsylvania’s Cultural Heritage Center) is to find and support local people who work to protect Syria’s diverse cultural heritage, and to channel their ambitions. While UNESCO is currently training neighbouring countries’ border police and customs how to fight the illicit trafficking of cultural artefacts, ICOMOS and others are supporting local people by, for example, hosting workshops to teach ‘first aid for objects and sites’.

Culture is a source of identity and thus an intricate part of what characterizes many post-Cold War armed conflicts. Therefore, cultural heritage, as a vector of identity, should arguably be seen as a vital component in resolving these type of conflicts. While not adhering to the belief that conflicts between identities are causes of war, but rather outcomes of war, the author of this essay agrees with Rubinstein, that ‘culture is implicated in nearly every conflict, whether those are between states, between states and non-state actors, or among actors within states.’. Although both tangible and intangible cultural heritage can be considered to be vectors of identity the main focus here is on tangible cultural heritage.

Within the fields of conflict resolution and peace studies the work on cross-cultural mediation by for instance Augsburger, Avruch and Lederach are common sources of inspiration, and so also for the author of this essay. But important insights on culture and conflict resolution can also be found within international business negotiations. Salacuse, for example, argues that there are five points that should be considered in order to bridge cultural gaps: (1) learn about the other side’s culture; (2) do not stereotype; (3) bridge the gap using the other side’s culture to identify and build a relationship; (4) use one’s own culture, helping the other to become more familiar with it; and (5) combine elements from both cultures in an integrative cultural blend. Salacuse’s simple points are maybe not that easy to consider in peacemaking processes but they are nonetheless key elements in successful peacemaking across cultures and perhaps even reachable if cultural heritage is used as peacemaker.

Suggestively, such workshops could be influenced by Lederach’s model for elicitive training. Contrary to how traditionally expert-led workshops assume that the knowledge of the expert(s) is what the participants need and where a ‘how-to-do-it package’ is presented, the elicitive approach considers the participants and their knowledge as the primary source. Thus, the role of the conflict resolution practitioner is to be a catalyst and facilitator for a productive process, and not the expert.

In other words, it is the participants who, through their commonsense knowledge and their cultural heritage, create an interactive atmosphere in which cross-cultural dialogue can take place. It is here that ‘peoples understanding about their setting’ and their ‘understanding about what things mean; that is, how language, perceptions, interpretations and meaning are constructed’ are given the space to be elaborated upon.

These events should however not solely be tailored in accordance with the elicitive model. It is important to find a middle-way where participants, conflict resolution practitioners, archaeologists and conservation experts can build on local commonsense knowledge and cultural heritage to create a seedbed for peace.

Gustav Rudd is a MA candidate and research assistant at the Department of Peace and Development, University of Gothenburg, Sweden.
Read more from Gustav Rudd 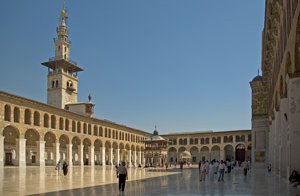