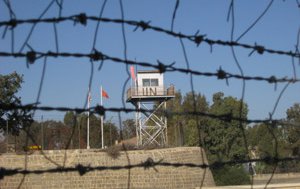 A UN watchtower overlooks the buffer zone between north and south Cyprus. Image credit: John Higgins
Until there is a structural reform of the whole process and the harmonious collaboration of leaders, civil society and the wider public is achieved, peace will be elusive.
After a long break, a new round of talks has started again in Cyprus. Both communities are busy preparing their negotiation teams; their politicians and leaders are discussing their shared views and remaining differences; and external stakeholders are looking on with very visible interest. On both sides, the media are buzzing with interviews, bulletins and TV programmes, and political analysts overseas are predicting and speculating on the future of this small Mediterranean island.

Two years ago during the last negotiations at Greentree Estate in New York, the atmosphere on the ground and overseas was entirely different. The indifference seemed tangible, the media were quiet and the negotiation process itself was drowsy.

The recent report of the International Crisis Group gives a good summary. Although the aspiration of these talks - i.e. some permutation of a bizonal, bicommunal settlement - is not new; this time, the stakes are different:

Firstly, the Greek Cypriot Leader Nicos Anastasiades is seeking a lighter federal structure than his predecessors, which will be more appealing to Turkish Cypriots and Turkey.

Secondly, there is dialogue first time since many decades, between the leaders and the guarantors of the opposite side; i.e. between Greek Cypriots and Turkey; and between Turkish Cypriots and Greece.

Thirdly, the international community is taking a much closer interest in this round of talks, due in part to the hydrocarbon resources discovered around the island in the past decade.

Perhaps a further reason for such attention is the potential economic benefit of a settlement in light of the serious financial crisis the Greek Cypriot Community suffered last year - as well as the embargoes endured by the Turkish Cypriot Community over recent decades.

This time, however, the atmosphere is vibrant, even hopeful, albeit cautiously so
In the past, most conversations about the negotiations on both sides of the island began with a rolling of the eyes and a sigh that said: "Here we go again". There seemed a general weariness of repeated attempts and a shared view that this had been going on for far too long. Everyone, quite frankly, had better things to do than to hope for the success of yet another peace process.

This time, however, the atmosphere is vibrant, even hopeful, albeit cautiously so. The deep, lingering scepticism remains. This is not the first time the stakes have been high, after all, and each time hope has crumbled into bitter disappointment.

The reasons for the failure of past settlement talks are manifold and some were very specific to particular circumstances at the time. One flaw, however, has characterised all previous attempts in Cyprus: talks have repeatedly been conducted with limited consultation or communication with the affected communities. It is no wonder that each time, the resulting decisions and proposals have been greeted with distrust by the islanders themselves.

So far, talks in Cyprus have consisted largely of bringing political leaders, the UN and the guarantors to the negotiating table. This traditional, top-down approach has created a pattern in which elected leaders have first made decisions on behalf of their communities, and only then reached out for their support. The preparation of the communities before and during the process has always been minimal, unsystematic and without a comprehensive feedback mechanism.

Over the years, attempts to engage the two communities in the processes have been deficient and, therefore, largely ineffective. In 2008 for example, the creation of technical committees for consultation was a step in the right direction but in the absence of a coherent structure, their work faded over time. The related series of public meetings were mostly question and answer sessions held on an ad-hoc basis and sadly did not facilitate regular, meaningful dialogue with the negotiation teams. This top-down approach has hindered a sense of public ownership, resulting in a fatal disconnect between political negotiations and grassroots reality.

How to create public ownership?

Despite the best intentions, political leaders alone may be unable to comprehensively address the mutable and multifaceted relationships between the communities in conflict. Negotiating behind closed doors can distort perspectives and leaders may find themselves lagging behind the changing dynamics within society. In recognition of this deficiency, formal negotiation methods in many other areas of the world have gradually been moving towards greater inclusivity; but, until now, the Cyprus peace process has stagnated in the old approaches.

A self-created way forward for Cyprus?

In a conflict like that in Cyprus where two communities, as well as broader regional and international actors, are involved , the overall picture is a complex one. The need for the confidentiality of potentially controversial decisions is understandable, particularly at the formative stages. But does this mean absolute secrecy is needed until the very end of the process? Couldn't a comprehensive system of consultation be designed by the respective communities, which enables open discussions and holds leaders to account, while retaining a degree of diplomatic discretion?

Cyprus today bears witness to the failings of a traditional, top-down approach to settlement talks. Experiences from other conflicts show that broadening the dialogue to include a wider range of opinions is both possible and fruitful in loosening negotiation deadlocks. There are many historical examples: Mozambique, Northern Ireland, Lebanon, and South Africa. While none of these instances offers a panacea, there are lessons that can be learned from them. Until there is a structural reform of the whole process and the harmonious collaboration of leaders, civil society and the wider public is achieved, peace will be elusive. So yes, there are new hopes for success this time round in Cyprus, but are these hopes likely to survive using the old approaches?

While cultural changes and paradigm shifts are notoriously difficult and cannot happen overnight, they are possible. Old habits die hard but such a shift will break familiar patterns: A shift to a new vision; a vision in which a 'peace process' involves the whole of society and not just the political elite...

Yeshim Harris is the Co-founder and Director of Engi, a social enterprise that focuses on the effective management of conflict, nationally and internationally.
Read more from Yeshim Harris 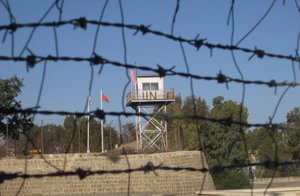