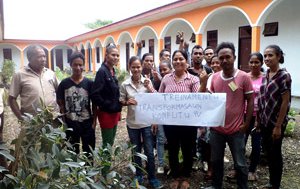 NGO Belun was established in 2004 by a group of Timorese people who had past experiences of working in the NGO sector; strengthening in partnership with Colombia University’s Center for International Conflict Resolution (CICR). NGO Belun has gone from strength to strength and currently has three core pillars, based on its 2013-2017 strategic plan: Conflict Prevention; Community Capacity Development, and Research and Policy Development.

Falling into this organisational strategy is the Early Warning, Early Response (EWER) system, which was set up in 2008-2009 as a response to Belun’s conflict assessment, carried out in 53 villages in partnership with CICR for the National Conflict Assessment in 2003, and then the Crisis in 2006, and is still running today.

The EWER system relies on a large contingent of volunteers to monitor and record conflicts in 43 of Timor-Leste’s 65 Administrative Posts, and then relay the information to Belun’s head office in Dili. The 86 volunteers all receive regular training on conflict transformation, and are located within the communities they serve. The data is then analysed and entered into Belun’s EWER database and Belun’s ‘Crowdmap’, an online tool which allows you to map the date, location and category of conflict recorded by the EWER system. Belun distributes the information in the following ways: In an effort to learn more about the EWER system and how it is contributing to the overall stabilisation of Timor-Leste, I interviewed four members of Belun’s staff: Luis Ximenes; Zach Abugov; Constantino Escollano Brandão, and Laurensius Lein.

Belun’s team were very clear that they see the EWER system as a capacity building tool for both the community and government, which has helped identify some of the main conflict drivers for the country: land conflicts and veteran dissatisfaction with the current government.

For example, an alarming number of disputes are occurring as a result of the Sistema Nacional Cadastro (National East Timor Registration System), a government project which is being carried out by the National Media Group Holding (GMN-H) and the ARM-apprize, Management Consultants.

The aim of the project is to document land ownership and “proceed with the implementation of a set of transparent and fair rules to regulate the ownership of mechanisms and transfer of ownership, protecting the interests of traditional owners and providing a social environment and healthy business, conducive to social peace and national and international investment in the Timorese economy” (SNC, 2015). However, some communities may not receive adequate warning of the SNC mapping being carried out and may not be properly informed on the purpose of the SNC documenting. The shock when it is implemented, coupled with a possible lack of mediation and immediate support for the community is likely responsible for a spate of incidences occurring during and directly after the survey (documented in Belun’s June situation review).

The EWER system documents these disputes, serving as a knowledge sharing platform for the government, police and local communities. Belun hopes the data in their monthly situation reviews will prompt a suitable response from the appropriate authorities. Another major threat to national stability, as identified by the EWER system, is veteran dissatisfaction with the current government. Some of the veterans groups believe that Timor-Leste’s constitution should revert to the one written in 1975, and many others feel forgotten despite receiving generous pensions and benefiting from construction contracts. Belun believe that there needs to be substantial dialogue between the veterans and the government, in order for them to feel a sense of justice.

The EWER system has also identified that the youth population of Timor-Leste are one of the main perpetrators of conflict across the nation. With youth unemployment standing at 40%, it is easy to see how young people, males in particular, can become involved in destabilising behaviour such as rock throwing, street fights and martial arts.

Belun utilises findings by the EWER system by seeking to influence government policy on destabilising factors such as veteran’s pensions, and encourage greater response levels by the PNTL to violent crimes. Each report, brief and conflict potential analysis drafted by Belun discusses one theme, and presents recommendations to the relevant stakeholders on how the issue could be addressed, be that policy reform or intervention. The EWER system also informs national conflict prevention procedures, such as those developed by key stakeholders including: the Ministry of the Interior; the Ministry of Social Solidarity (Department for Peacebuilding and Social Cohesion), the National Police of Timor-Leste (PNTL) and the FALINTIL - Timor-Leste Defence Force (F-FDTL) amongst others.

The EWER system is designed to facilitate an early response from appropriate parties such as the PNTL, community leaders or veterans groups, and in some cases, Belun’s own teams will be involved in the resolution of conflict. Belun’s Land Dispute Mediation and Resolution team conducts land mediations when it is able, but with thousands disputes reported since 2009, the team can barely scratch the surface. By connecting conflict monitors with the local community, the local population have also been able to see that violence is not an everyday occurrence. Since the monitors are now taking a more active role in community life, they have effectively changed people’s behaviour, and improved their capacity to resolve conflicts independently and help themselves.

For more information on the EWER system and other programs Belun is currently conducting, please visit their website at www.belun.tl.

Freya Shaw is an international peacebuilding and conflict resolution consultant who most recently worked in Timor-Leste, both with national and international NGOs.
Read more from Freya Shaw 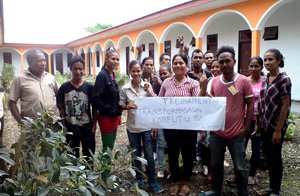