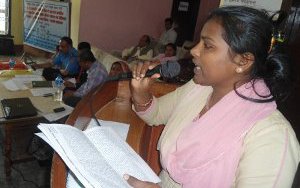 The meaning of ‘Mukti’ is freedom, emancipation and liberation. Mukti Nepal was established with the aim of ending all kinds of inequalities and violence against women, particularly in the Siraha district and in Nepal in general. It was established during a 16-day annual campaign on violence against women in 2010. Mukti Nepal is a locally owned organisation and aimed at not only bridging the gap between the centre and the local, but also not hiding from local women issues that need an urgent response. It is a female only led organisation.

Shyam Kumari Sah, who was awarded the human rights award from the French embassy of Nepal in 2011, has headed Mukti Nepal since its establishment. A young and energetic woman, Sah was also nominated for “emerging champion for peace” for the N-Peace Award of the year 2012. She was invited to travel and share her experiences in the UK, in the Netherlands and in Germany by Peace Brigade International in October 2012. She also visited the USA for the ‘Women as Political Leadership’ programme by the US embassy of Nepal.

When she was only 13 years old, Shyam Kumari Sah rebelled against her marriage, and the dowry demanded from the groom’s side. She finally escaped from the child marriage and decided to continue her education. She completed a Bachelor degree and is currently in her final year of a Masters degree. She further realised that legal knowledge is compulsory to deal with cases in security and in legal agencies. She has also been studying a Bachelor of Law. She has not only been continuing her study but started working on women issues immediately after completing her school education. She has also become a female human rights defender and works for the overall enhancement of women’s situations.

When she felt the need for working through institutions, she established Mukti Nepal and has been mentoring an effective team. When why she needed to establish Mukti Nepal, she replied that “there was no specific single organisation that worked solely on women’s issues and the organisations based on the national level occasionally visited and worked only their necessity but not the necessity of the women in Siraha.” All executive members of Mukti Nepal are women human rights defenders. Mukti Nepal has been currently working in three sectors:

Under Sah’s leadership, Mukti Nepal has already dealt with more than 50 women’s cases. However, not all the cases resulted in providing justice to the female victims. Sah has recognised that the slow and lengthy legal system, a rigid social structure and political instability are major obstacles to provide justice to women victims of gender-based violence. Sah said “we have been regularly holding dialogues with concerned stakeholders such as police, chief district officer, village and district development officers, political leaders and concerned others” on the question of how to address these obstacles from the local level. Beside these hindrances, Sah’s cooperation with her team has already handled some considerable women’s cases.

Geeta Sah, who was a victim of dowry from her husband and his family, was successfully rehabilitated by Mukti Nepal. She then claimed property and obtained her portion of the property from her husband and in-laws by support of Mukti Nepal. She is now living a dignified life whilst raising her only son. Another that was a victim of polygamy resumed her life after counselling and rehabilitation and became economically self-reliant by income generating activities and support of Mukti Nepal. Similarly, a woman who was a victim of dowry and domestic violence successfully became a women’s human rights defender and has been working in Mukti Nepal. Whilst Mukti Nepal lacks a rehab centre, they do refer serious cases to organisations that have rehab centres.

When Sah recollects these stories, she feels proud but immediately thinks of the many things to be done and the journey to peace, equality and justice is very long and tough. There are many steps to be climbed to create equality and a just society. A woman from the Madhesh (people living in Terai area of Nepal) community knows that her journey is not without challenges. She received threats many times in the early stage of her struggle and still she is condemned for riding a motorbike and wearing jeans in her place. She knows that her journey needs courage, passion and support. She further believes that she can tackle the challenges ahead, but at the same time believes that she needs solidarity and collaboration from people who work for the same cause to establish equality, peace and justice.