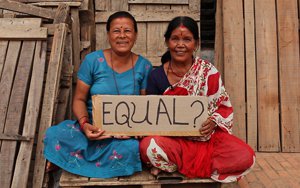 Nepal currently has a female President, a female Speaker of the Parliament and a female Chief Justice. Three major roles are being performed by three women in the country. It is a big step for a country like Nepal where women have been struggling for equality for many years. Although female involvement in Nepalese social and political fields has hardly been mentioned in history, women have played a significant role in major social and political events.

Many women who felt empowered by the Maoist conflict have not seen that translate into decision making power
An armed conflict between government forces and Maoist rebels lasting from 1996-2006 aimed at establishing a People’s Republic. The Communist Party of Nepal - Maoist (CPN-M) started fighting with aim of establishing proletarian rule in the country which only ended with the Comprehensive Peace Accord (CPA) in 2006.

Women played varied roles such as combatants, party workers and supporters in the conflict.Researchers, analysts and the Maoist Party itself claimed that there were about 40% female combatants in the party involved in the internal armed conflict. Many saw this as psychological support to the Maoist party to continue the conflict.

Approximately 1,665 women lost their lives out of a total of 15,027 during the ten years of internal armed conflict. It has been claimed that women who were involved in the Maoist party felt no discrimination and actually experienced equality during conflict. Female combatants fought alongside men on the front lines during conflict. On the contrary, women and girls were deprived of equality with men in everyday life and in the society.

The notable journey of the first female House Speaker, Onsari Ghartri Magar, began from a Maoist combatant background. She joined the party before it was involved in conflict and directly engaged in a combatant role when the party decided to begin armed conflict in 1996. Before being a Speaker of the Parliament she was a Vice-speaker during the first Constituent Assembly from 2008 to 2012. The election of the first CA was held in 2008 after reaching an agreement between the Maoist party and the government in 2006 to hold the CA election to write a new constitution.

However, despite this, the peace process did not reflect female participation nor empowerment. During negotiations not a single woman was represented in the negotiation team from the both Maoist party and the government. Whilst Onsari Ghartri Magar has managed to climb the ladder of political leadership, many women who felt empowered by the Maoist conflict have not seen that translate into decision making power.

The 2nd People’s Movement of 2006 and women’s roles

Considerable numbers of women participated in the 2nd People’s movement in April 2006 which overthrew the King and established a Republican country that lasted for 19 days. Women from all sections of society took part in the nationwide movement, hoping to uplift their situation whilst establishing Republicanism in the country.

Following the success of this movement, parties reached an agreement on the election of the Constituent Assembly (CA) to write a new constitution. Extensive female participation in the 2nd People’s Movement and continuous efforts by women in the Legislature passed the Resolution Proposal that ensured 33% female representation in every sector of the government in 2006.

Election of the Constituent Assembly and women’s representatives

Article 63 (5) of the Interim Constitution of Nepal, 2007 guarantees that one-third of the CA should be made up of female members.

More than 33% of female CA members from different political parties were represented. 30 women were directly elected out of 240 seats and the rest were nominated by the parties through the proportional method. Altogether there were 191 female CA members out of 595, unlike earlier parliaments were female representation was very basic. In Nepal’s history this was a big achievement for women’s struggle for equality.

Bidhya Devi Bhandari, the first female president of Nepal, began her journey as a party worker. Previous to this post, she was an influential leader in the party, served in different Ministries and was previously Defense Minister.

Likewise, the Chief Justice, Sushila Karki, began her career as a professional lawyer. Due to her continuous dedication in the justice field she was awarded the post of the Chief Justice. This is the first time in Nepal’s history the country has had a female Chief Justice and this is really a step forward in the struggle for female equality.

What next for equality?

The struggle of Nepalese women for empowerment and equality is moving ahead and positive changes have gradually materialised. However, more still needs to be done. The struggle is still in the middle of the road.

Many argue that equality means 50% representation in every sector, not just 33%. The 2015 constitution of Nepal has many positive aspects ensuring equal rights for women but it has not been free from criticism, particularly regarding citizenship issues. There is still discrimination between a father and a mother for granting citizenship to a child in the case of children born from either a foreign mother or a foreign father. The struggle for equality and empowerment has not ended with the achievement of these three remarkable women, and must be continued to ensure an equal society for all.