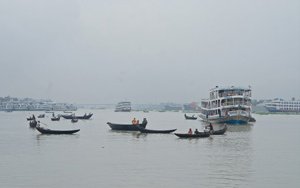 Bangladesh has seen a wave of killings in recent months. Image credit: Rajesh Pamnani.
In discussion with Saimum Parvez, a Senior Lecturer in Political Science and Sociology at North South University, and Neila Husain, a conflict and security analyst and former senior research fellow at the Bangladesh Institute of International and Strategic Studies, our Bangladesh Local Peacebuilding Expert explores radicalisation and violence in Bangladesh.

What are the key security threats in Bangladesh?

The current government came to power through a questionable national election in 2014
SP: Key security threats include political violence originating in the contentious relationship between Bangladesh’s two major political parties, the killing of bloggers, foreigners and faith leaders by local militant outfits, and human security concerns such as climate change.

I want to say that the biggest security threat today is the lack of consensus between the political parties. The current government came to power through a questionable national election in 2014. Political space has been shrinking, and it could create a dark future as extremist groups could re-emerge with the frustration originating due to the lack of political freedom.

NH: The overall security scenario in Bangladesh has not changed dramatically in the last few years. The state and the individual remain the main targets, and terror and violence are still the preferred tools. Having said that, it is equally true that there are changes in who the players are, who they are specifically targeting and most importantly the scale of their operation. There we notice significant change. The number of players have multiplied, the targets are easy and vulnerable, and the operations are dark and complex. The way Bangladeshis are being increasingly trafficked in inhuman conditions to foreign lands, the alarming rise in crime in particular violence against women and children, the rising number of innocent people targeted by extremist groups, and the level of intolerance across socio-economic, religious and  political groups are some of the major security threats that we as a nation face today. But the key challenge is how to address these challenges that are no longer local in nature. Some of the issues have crossed boundaries, some of the challenges are a million dollar business while others are hostage to power game.

What do you understand by “radicalisation and extremism”?

SP: I see two forms of radicalisation in Bangladesh. Besides Islam-based, theological conflict, Bangladesh is confronting the emergence of a radical secular group as well. Both of these go against the tolerant nature of Bangladeshi national identity and culture. "Radicalisation”, as a concept, is a step that comes before “extremism”. A person could be radicalised, or sympathetic to extremist activities, but not always express it. However, when that person goes to the next level, and become extremist, they do not hesitate to take violent means. Thus, extremism is the last stage of radicalisation.

NH: There is a fine line between radicalisation and extremism and I think most people use it interchangeably. Radical views or extremist views do not necessarily mean resorting to violence, although that is what we see today. As to why and how people get radicalised, the answer isn’t simple. In Bangladesh, unfortunately, the rise of social and political intolerance, the absence of the rule of law, and economic disparity has given space and opportunity for  extremist ideas to spread in our country. For example there are those who criticise Islam openly in their blogs in the name of freedom of speech – that is one form of intolerance and extremism. Then there are those who try to justify extremist violence in the name of Islam. Both are wrong and people should see that.

Which extremist groups are active in Bangladesh?

We are unable to single out any particular group responsible for recent incidents
SP: There are a range of groups active in Bangladesh. The first generation of ‘Islamist’ militants started their activities after veterans of the Afghan War came back to Bangladesh in early 1990. Harkatul Jihad Bangladesh or HuJIB is one of these outfits. Later, in 2001-2005, Jamatul Mujhahidin Bangladesh and Jagrata Muslim Janata, Bangladesh were also active. In the third phase, after 2013, Al-Qaeda in the Indian Sub-Continent, and Ansarullah Bangla Team claimed to have participated in several killings. There are also leftist militant outfits in the southern part of Bangladesh.

These militants use several means; including exploding locally made explosive devices, killing bloggers, foreign nationals, and minorities. An alarming sign is that some youths are becoming involved in these groups, and they are tech-savvy. It is easier for them to keep contact with international terrorist organisations through the internet.

However, we have not yet seen any massive scale attack in Bangladesh, although we have seen that small scale attacks are on the rise.

NH:  I think this is a question which still needs an answer. We definitely have extremist violent groups operating in the country carrying out heinous acts of crime. The objective of these extremist groups is to destabilise the government or state. Whether we are talking about home grown terrorist or international groups is not the question. In this age of connectivity terrorist and extremist radical groups are closely connected, whether through ideas or ideological support, or material support including weapons, training or financing. Like I said, there are a number of actors now and we are unable to single out any particular group responsible for some of the recent incidents. A few years back, it was a different story. It came out eventually if there was a bomb or grenade attack. Now fingers are pointed to Islamic State, although the government clearly denies IS involvement. So unless we have our facts straight, this remains open to interpretation.

How do they recruit members? Whom do they target to recruit in their groups?

SP: These terrorist groups use various methods; peer pressure and internet are two most effective methods. Some of the youths get involved in these groups because of their attraction towards heroism and romanticism.

What if any role do Quami Madrassas play in religious extremism in Bangladesh?

SP: It is very difficult to establish a direct correlation between Quami Madrassas and religious extremism. I know some of the madrassa students and teachers were allegedly involved with extremism and these madrassas are not directly regulated by the Bangladesh government. However, Quami madrassas openly oppose violent extremism. Recently, we saw that English medium students and well educated individuals have become involved in religious extremism in Bangladesh. So, we should not only blame the Quami madrassas.

What is the role of government and law enforcement in tackling radicalization?

NH: The role of the government is crucial. The Bangladeshi government has been successful in rooting out some of the major terrorist organisations and their activities after the Ramna botomul incident and the subsequent bombings in Bangladesh. But this time, it is different. The terrorist groups are targeting minority groups, foreigners and people of other faiths or who have  views opposed to theirs. The government needs to do a thorough mapping of the active extremist groups in this country. Any research will find that there are specific geographic locations for breeding extremist groups. Trying to improve socio-economic conditions, providing more political and religious space to those who feel deprived and modernising the education system could be the first few steps towards de-radicalisation.

What is the role of civil society, citizens and youth in addressing this threat?

SP: Civil society organisations have a key role to play in addressing this threat. They can and are taking approaches including cultural programs and awareness raising campaigns.

In Bangladesh, we see that extremism groups do not have popular support. People do not like them. As fish without water cannot survive, extremists can’t survive without popular support. They can’t be mainstream in our society. However, government should organise more public dialogues regarding this issue jointly with media, CSOs, government and NGOs. We need to strengthen society to counter militancy and build peace in our community.

NH: Peacebuilding is often associated with the post conflict restoration processes. While macro-level peacebuilding in post conflict countries is undoubtedly important, we equally need micro-level peacebuilding in ‘peaceful’ countries where there is no classical war and yet innocent men, women and children are being killed, injured, raped, rendered homeless, and kidnapped everyday This is where peacebuilding efforts can intervene to teach people tolerance, respecting others’ views and building their communities together. I believe a country like ours needs a multiple tier peacebuilding mechanism, which starts from the grassroots, family, school and community-level and goes all the way up to the top engaging policymakers, civil society and law enforcement and security agencies. We should learn at an early age the importance and process of building peace in our community by engaging with local elites, youth, women and children by bringing them together. In the long run, we learn to communicate, listen, and voice our concerns through dialogue, not by force, violence or making threats. Peacebuilding should be a comprehensive and an all-inclusive process that is accessible to all. Read part two here.

G. M. Shoeb Ahmed is Peace Direct's Local Peacebuilding Expert in Bangladesh. He has over 10 years' experience in peacebuilding, youth development, small arms control, human security, women’s rights and entrepreneurship, and has coordinated and facilitated training, advocacy workshops and national seminars on these issues.
Read more from G. M. Shoeb Ahmed
Disclaimer: The views expressed in this article are those of the author and do not represent the views or position of Peace Direct.