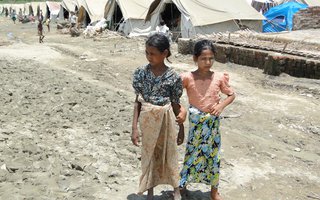 Evangelos Petratos EU/ECHO
In the latest outbreak of violence, a major military crackdown coupled with Buddhist extremist attacks on the Rohingya people began

Do we ever examine why we want to be part of a state?  Or why we demand humanitarian support from the state’s authority?

The answer is straightforward: human beings are social animals and the state is bound to meet every societal need because the state itself based on the tacit support of its own people­­. But what if the state denies one’s status?

Welcome to the plight of one of the most buzzed terms of the recent time, “Rohingya”, a stateless ethnic minority group, being labelled as illegal immigrants by the fellow compatriots.

The Rohingya people can be traced back to their ancestors in 8th Century Burmese history. But having officially stripped the Rohingyas of their citizenship status under the 1982 Myanmar Nationality Law, the military government in Myanmar placed restrictions on the access of the basic humanitarian needs of the Rohingyas.

In the latest outbreak of violence, the worst scenario developed into the infernal scenario of August 2017, as a major military crackdown coupled with Buddhist extremist attacks on the Rohingya people began.

There are many questions that need to be answered. In the most recent outbreak of violence, what is driving the Rohingyas off their land? How are they accepted and treated in Bangladesh? And what can be done to end the suffering many face?

The recent “Ethnic Cleansing” of Rohingyas started in the name of an “act of retreat” by the military in response to series of alleged attacks on police by the Arakan Rohingya Salvation Army (ARSA) on 25 August 2017. Since then, at least 480,000 Rohingyas fled into Bangladesh, pushing the number of Rohingya refugees in Bangladesh up to 700,000. Before this, the minority faced military crackdowns in 1978, 1991-1992, 2012 and in 2015.

Before contemplating the plight of the Rohingya, we need to understand the how they are perceived in Myanmar. Rohingyas entered Burma during the British colonial period in search of jobs. During World War II, Rohingyas fought for the British regime whereas their Buddhist compatriots sided with the Japanese, and this eventually led to a communal violence. British authority promised Rohingyas an independent state but later reneged on this.

However, between 1948 to 1961, a failed Rohingya secessionist rebellion put their status in much uncertainty.

Apart from the Rohingya community, five other Muslim minority groups reside in Myanmar: Kamein, Indian-descended Muslim community, Panthay, Pashu, and Bamar. These groups have been put under pressure from military rulers since 1962, the date many see as the beginning of the systematic removal of Muslims from the military.

The path to safety is covered with land mines, meaning Rohingyas are literally trading their lives with the risk posed by mines.
The journey to Bangladesh from Burma has never been an easy task for the fleeing Rohingya. Inhabitants around Maungdaw, near northern Rakhaine state, just need to cross the Naf River to get into Bangladesh. However, in this process around 60 people have already died as their boats capsized while crossing the River.

Those who reside further south than Maungdaw must avoid security camps and cross hilly roads which can take up to 15 days.

This path is covered with land mines, meaning Rohingyas are literally trading their lives with the risk posed by mines.

Aid to the refugees: the Bangladesh chapter

The Bangladesh Government has relaxed the restraints on different aid groups operating in refugee camps, and the Bangladesh Army, along with the district administration, has already begun working on relief efforts and the rehabilitation of refugees following chaotic reports coming from refugee camps. The government's NGO Affairs Bureau has permitted 30 local and international groups to work in the camps, verified by a Bureau Director, Shadat Hossain.

Local groups are working to aid the Rohingya

Since 26 August, around 26,000 shelters in 12 slums in Ukhia and Teknaf have been built by the administration and local groups.

In responding to the crisis, BRAC, one of the largest NGO's in Bangladesh, has employed 170 staff in 10 makeshift settlements in Ukhia and Teknaf. Water crises in those camps are intense so BRAC has provided 5000 litres of safe water, 54 tube wells and 155 latrines.

BRAC will also have opened 35 health centres and 10 maternity centres by next week.

As of today, a number of local groups of people are working to aid the Rohingyas. One of these such groups is providing food to the Rohingya children and it has opened a Facebook event asking for donations to support this. According to the group, they have already begun working in two sub-groups to feed the children.

However, the district administration requested the local aid group allow them to distribute the relief. The reason is that these refugees are staying in a remote area and the authorities wish to maintain a disciplined environment and ensure proper management of air relief. The transportation around the area is not in good condition, complicating the distribution of aid.

On the verge of becoming a real-life modern example of “ethnic cleansing”, Rohingya people are not certainly finding any of the major diplomatic efforts to be on their side
The latest UN council meeting, Russia urged not to put pressure on Myanmar government regarding recent scenario in Myanmar, “fearing” that it would aggravate the ongoing situation. China, on the other hand, sees no overnight solution of the matter.

On the verge of becoming a real-life modern example of “ethnic cleansing”, Rohingya people are not certainly finding any of the major diplomatic efforts to be on their side.

Global leaders need to step up. They must act with urgency to ensure the Rohingyas, probably one of the most unfortunate ethnic groups, can live a life like normal humans - with dignity and identity.

Human rights Refugees and IDPs Atrocity prevention
Disclaimer: The views expressed in this article are those of the author and do not represent the views or position of Peace Direct.

Latest from Bangladesh and Myanmar →