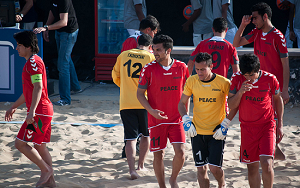 The Ivory Coast football team won its first major trophy in 20 years this month, sealing victory in the Africa Cup of Nations in a dramatic penalty shoot-out with West African rivals Ghana.

At Insight on Conflict, we were delighted to see countries from across the continent participate in Africa’s premier sporting competition, including DR Congo, which we know well. But what also caught our eye was the eventual winner.

The Ivory Coast has been at war with itself for more than a decade, and with elections looming later this year, tensions remain high. But after a stormy tournament in which one semi-final was nearly abandoned because of crowd violence, the Ivory Coast’s footballers united on the pitch to win the cup.

Star striker Dider Drogba helped secure a truce during the Ivorian civil war
And they have been trying to create unity off the turf as well. Although best-known for their prowess on the playing field, these national heroes are contributing in other ways at home and abroad. Several of the players support peacebuilding and development initiatives in the Ivory Coast, using their success in Europe and elsewhere to build a more peaceful future for the troubled country.

Most famously, former captain and star striker Didier Drogba helped secure a temporary truce in the middle of the Ivory Coast’s long-running conflict in 2007. It allowed his team to play a qualifying match in opposition-controlled territory. The entire team was later nominated for an award in recognition of their efforts.

Drogba has since set up a foundation to support development projects in the Ivory Coast and elsewhere, and restated his commitment to using football for peace, saying it is the only thing that has united his country in recent years. Celebrations at a tournament for internally displaced persons in Darfur. Image credit: United Nations Photo.
The UN mission in the Ivory Coast even set up a league between peacekeepers and local armed forces
Other players have contributed in different ways, such as Kolo Touré, who has worked for the Roll Back Malaria campaign, and urged for calm around Ebola testing last year. And last Sunday’s victorious captain, Yaya Touré, is a UNEP envoy in the fight against ivory poaching, an important issue in West Africa.

This work is part of a growing recognition that sport in general, and football in particular, can play a role in peacebuilding and development. This has been formalised in several initiatives:

Similar initiatives are being implemented across the world by local organisations. They can sometimes be hard to find, but they are doing valuable work, quite literally at the grass roots of peacebuilding activity. On our site we have mapped several groups who use football and sport in all or part of their work.

It has been used to help young people in the DRC and Kenya, support reconciliation in Burundi, and assist a range of projects in Pakistan. Our Local Correspondent in Nigeria, Michael Olufemo Sodipo, has reported for us on the role of sport in development in his country. And we know that there are more schemes out there.

We will continue to work to find them, using our network of local correspondents around the world. Even if – as Michael notes – sport will not change the world on its own, maybe harmony on the pitch can contribute to harmony off it.

As this year’s cup of nations demonstrates, football can inflame passions and lead to violent incidents. But as the work of the Ivory Coast and others also shows, football and sport can play a role in promoting long-term unity. We must work for more of the latter and less of the former.